I come from a family of pie lovers. I can reel off every family member's favorite pie without even thinking about it. My mom makes pies for every major (and minor) occasion. On my birthday, I get two lemon meringue pies - one to eat with the family and the other to take home and eat by myself. Her little terrier, who has a (completely understandable) insane love of pie dough actually recognizes the rolling pin, and refuses to leave the kitchen whenever she sees it come out from the cupboard, because she knows there will be scraps of dough. My sister really wanted a whole bunch of pies at her wedding, instead of a cake, but we realized it would be insane to try to bust out dozens of pies the day before a wedding. We were so right, by the way.

Now that my pie bonafides are established, I will admit that I also love cake, and I am sometimes sad that I so seldom get a chance to bake it. Once a year, however, my mom's birthday comes around, and I make THE CAKE. It is pretty much always referred to in capital letters, because it is equally scary and delicious. My mom only eats one cake, and she takes it pretty seriously, so there is a lot of pressure. THE CAKE is the devil's food cockaigne recipe from the old Joy of Cooking, and the frosting is the fudge frosting from the same book. I suppose it is really the frosting that should be all in caps, because it is the crucial element.

Making fudge is not easy or particularly fun if you are stressed and have a lot riding on it. It is annoyingly temperamental, and shifts in humidity can make your life miserable. I spent several years crying over ruined batches of fudge, and I can't tell you how many pounds of chocolate have been thrown away. This year I spent 20 minutes beating the frosting before it would firm up (without the KitchenAid, there would be no frosting) and the whole time I was nervously watching it and telling D "I don't think it's going to work, wait, maybe it will, no, I don't think it will." Luckily, it did. 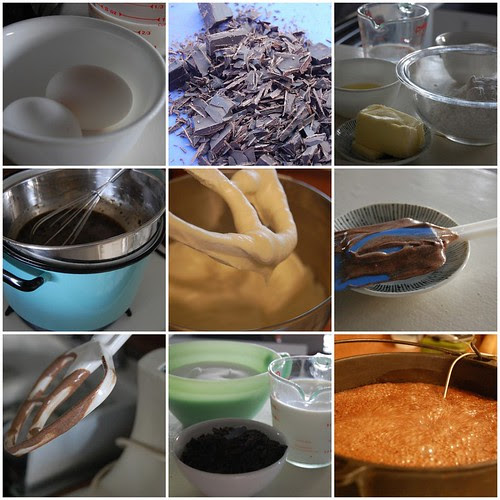 Cake in process 1 -3: ingredients patiently waiting to be added (I always measure everything out in advance and then wash dishes as I go). 4: My new "double boiler." 5: The batter before the chocolate custard is added. 6-7:The batter after the chocolate custard has been added. 8: The fudge ingredients waiting (sugar is in my favorite pouring bowl, which cost $10 at the flea market!). 9: The fudge boiling away in a large cast iron pot.

I can't in good conscience encourage anyone to make this cake, but I will post the recipe just in case you want to try (plus lots of pictures for those who prefer to just look).

Devil's Food Cake Cockaigne from Joy of Cooking 1975 edition
Preheat oven to 350F.
Cook and stir in a double boiler (I don't have a double boiler, but I found out that one of my mixing bowls nests perfectly in my beautiful new stock pot - score!):
2 - 4 oz. unsweetened chocolate
1/2 c. milk
1 cup light brown sugar, packed
1 egg yolk
Remove from heat when thickened (whisk occasionally while it is cooking). Set aside.
Beat until soft:
1/2 c. butter, softened
Add and cream until light:
1 c. sugar
Beat in, one at a time:
2 eggs (technically, you are supposed to separate the eggs and add the yolks here, then whip the whites and fold them in at the end. I did this for years and it made no discernible difference in the final product, but it was a pain. I'm a lazy baker, so I just add the eggs whole now).
Sift together (or mix with a fork, if you hate sifting, like me):
2 c. cake flour
1 tsp baking soda
1/2 tsp salt
Add the flour to the butter mixture in three parts, alternating with the following mixture:
1/4 c. water
1/2 c. milk
1 tsp vanilla
Stir the batter until smooth after each addition. Stir in cooled chocolate custard. Bake in greased pans about 25 minutes, or until a toothpick inserted in the center of the cake comes out almost clean, with just a few crumbs clinging to it.

*** EDIT (8/2010) - you MUST grease and flour the pans thoroughly. Once the cakes are done, pull them out of the oven and let them sit on a cooling rack for about 15 minutes. Then run a butter knife around the edges of the pan, hold your hand over the cake and flip the pan over. Gently tap the pan until the cake gives and place it on the cooling rack to finish cooling.  I had much better luck in 2010 and all 6 of my cake layers came right out of the pan with none of the scarring you see here. *** 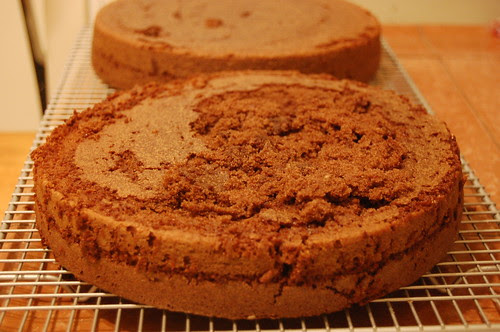 Cakes cooling - notice how mangled the front one is? The cake is super delicate and one of them always decides to tear while coming out of the pan.

Fudge Cockaigne Frosting (also from Joy of Cooking)
Bring to a boil in a large heavy pan:
1 c. milk
Remove from heat and stir until dissolved:
2 c. sugar
1/8 tsp salt
2 oz. unsweetened chocolate, grated
Bring to a boil and cook covered 2 - 3 minutes until the steam washes any sugar crystals down the sides. Uncover, reduce heat and cook without stirring to soft ball stage, 234F (you need a candy thermometer). It takes a while to get up to temp. It will get up to 200F relatively quickly and then sort of hover there. Stay patient, keep watching. It will eventually hit the softball stage. Remove from heat without jostling or stirring. Cool the candy to 110F (you can stick the bottom of the pan into cold water to speed this up). Then add:
2 -4 tbsp butter
Beat fudge partially, add:
1 tsp vanilla
Continue beating until it looks like frosting. Sometimes this is nice and quick. This year, it took the aforementioned 20 minutes, while I agonized about the prospect of making another batch.
Optional (but not optional for my mom): add 1 c. walnuts, coarsely chopped.

*** EDIT (8/2010) - more details on the fudge frosting. I've been playing with ways to make the fudge frosting less heartbreakingly difficult and I think I'm mastering it. First of all, the picky instructions are mostly important if you are making actual fudge, I think. For actual fudge, you don't want to introduce any sugar crystals during cooking, because it adversely affects the texture of the final product. As the frosting gets beaten instead of being poured into a slab, I don't think this matters as much. This year I made these changes:
- Doubled the recipe
- Skipped the covered cooking stage at the beginning
- Ignored the rules about not stirring the fudge while it's cooking. I stirred it a few times (not constantly) during the cooking process and I used a heatproof spatula to scrape down the sides once or twice.
- Only let it cool down to about 150F before scraping it out into my mixing bowl.
- Mastered the mixing. This part is tricky because you have to get a feel for it. I use the KitchenAid stand mixer and start beating while the fudge is still fairly warm. The mixing time varies greatly. This year I think it was less than 5 minutes. You can tell you're getting close to the proper consistency when the fudge loses a bit of its sheen. It starts to look a little bit lighter. At this point, add the walnuts. Adding the nuts usually makes the mixture lose a lot more sheen and sometimes pushes it over into the chalky/not smooth territory. If this happens and the fudge is not spreadable, add a splash of milk (I used whole) and beat it in. You want the fudge to be thick but still spreadable, so you may need to add another splash of milk.
- Thinned the frosting for the final coat. I like a thick frosting to go between the cake layers, but I wanted something much thinner to spread on the outside. I took the last bit of the frosting, thinned it with milk as described above but made it thin enough that it was a bit runny rather than just spreadable. Then I sort of glopped it onto the side of the cake and used an offset spatula to even it out. I liked this look. ***

*** EDIT (8/2012) - Successfully TRIPLED the fudge frosting recipe this year and it turned out perfectly. I didn't have the usual cast iron pot that I use so I had to use one of my stainless steel pots. 6 qts is too small by a smidge! It doesn't look like it when you start, but trust me, it is. 8 qt pot was just barely big enough, but it worked well. Cooked it up to 234, tested it by dropping a few drips into a glass of water and it didn't look quite cooked enough, so I let it cook until it did (it hit 235 on my thermometer, so not too far off). Took it off carefully and put it in the sink to cool down. Triple batch takes much longer to cool (um, not surprising) and it looked like it might be grainy, but it beat up perfectly once I got started. Yay! ***

I actually doubled the recipe, which is completely against all the rules. It might be why my frosting was so reluctant to set up. I still think it was worth it, because washing out the pan the the fudge is made in is kind of awful. 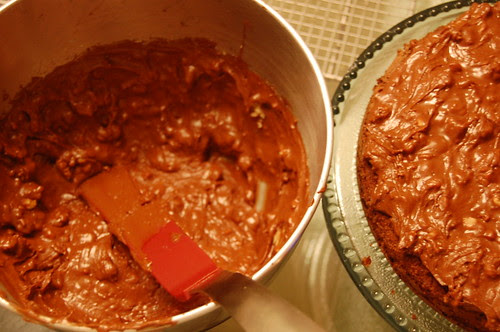 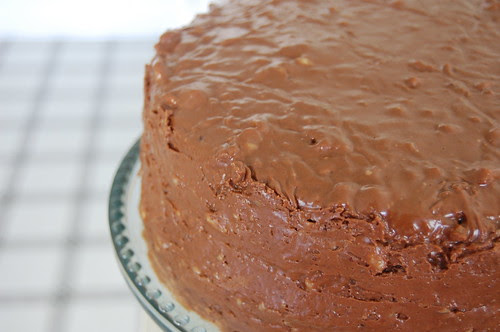 Oh, and there is a serious family rule regarding birthday leftovers. You eat what you want at the party, but once it's over, you keep your hands off the leftovers unless you have explicit permission. My mom once broke up with a man because he knowingly ate a piece of chocolate that belonged to her, apparently under the mistaken impression that she would think it was funny. No joke. You don't mess with THE CAKE (although if you ask nicely, she'll usually share). 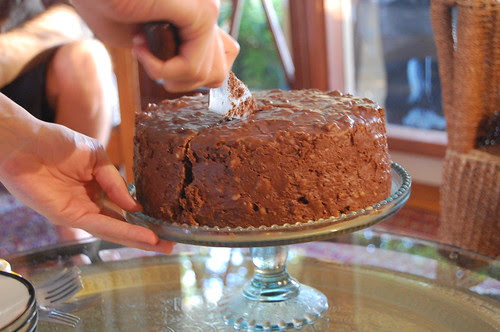 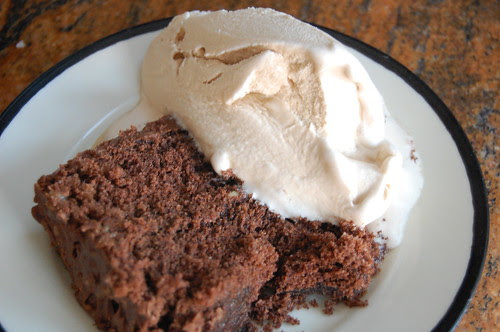 What's that on the side? Oh, just hand churned coffee ice cream. My parents are pretty amazing.
Posted by Rachel at 7:15 AM