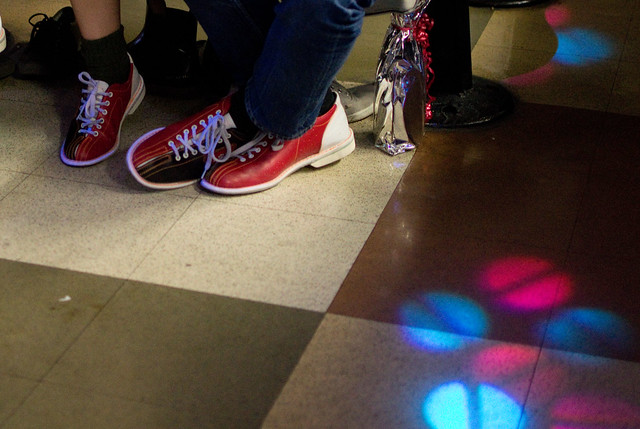 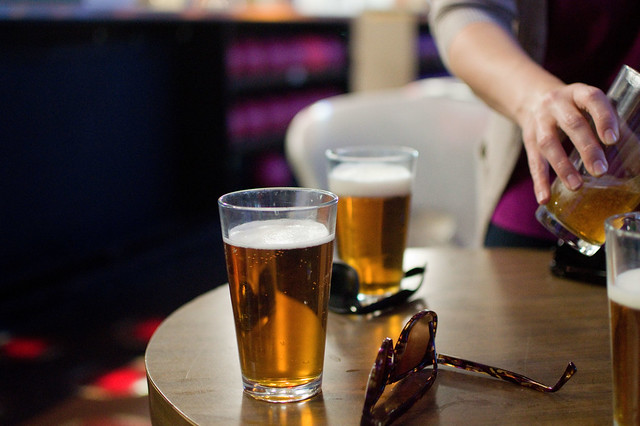 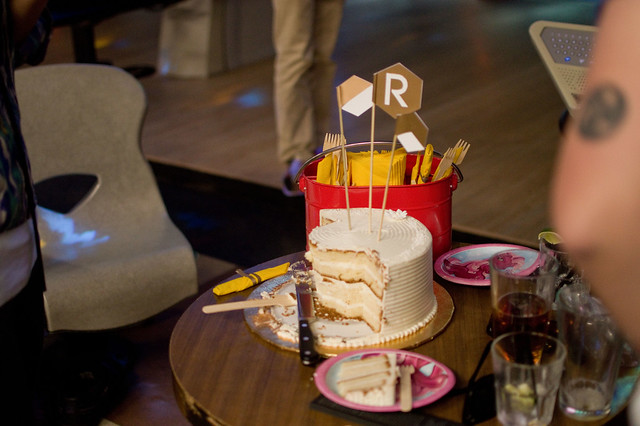 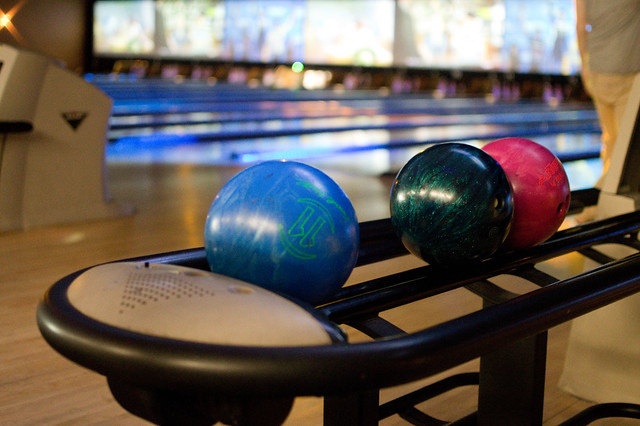 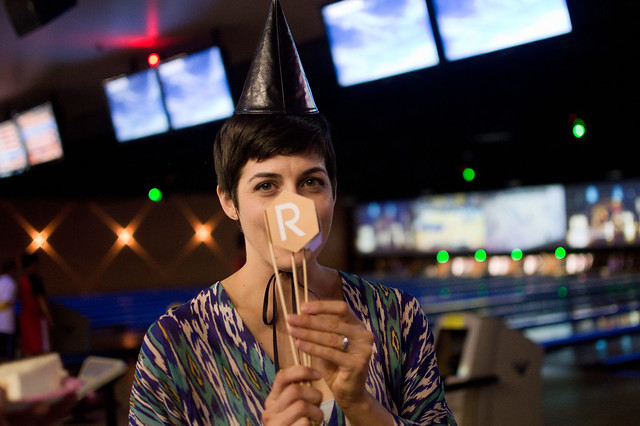 {30 - with the otaat party hat and cake toppers by d}
I avoid birthdays, not because I mind ageing (although I do keep reminding myself to finally try some of your eye cream suggestions) but because having that much attention focused on me freaks me out.

This year D insisted we do something, anything, so I requested a cake and we rounded up some friends for a bowling date. I had the exact same party when I was 10, minus the beer. It was awesome this time around too.

And since we were on a roll with the whole celebrating thing, I convinced him to go to Disneyland with me on Monday. First time in 15 years and Indiana Jones was as amazing as I'd remembered.

Everyone in Los Angeles has already been to Handsome but I didn't see why that should stop me. 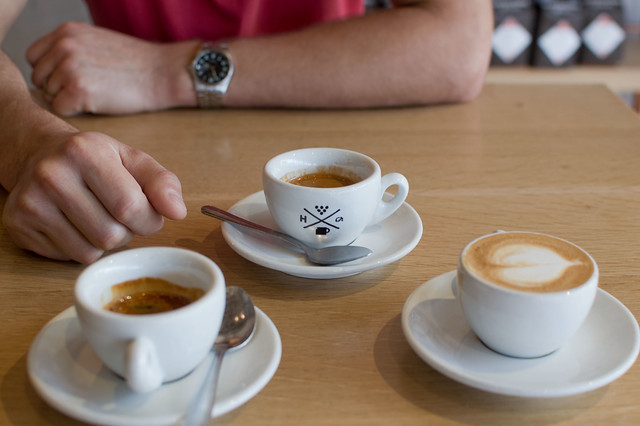 We've been testing out different espresso bean options over the last several months. D and I splurge on beans because we figure we save so much by not buying coffee out that we deserve to treat ourselves. 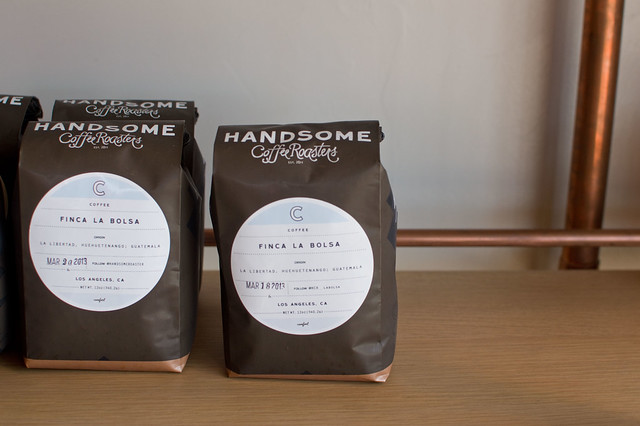 {handsome coffee}
We tasted both the Dandy and the Dapper. D settled on the Dandy for now. They don't carry a decaf espresso, so I'm still sticking with my Intelligentsia for the time being. Still can't handle daily caffeine. Bummer.
Posted by Rachel at 5:58 AM 10 comments:

A few months ago I was sitting in traffic trying to get home and I googled "run commute" on my phone. And yes, it turns out there are people who run to work. 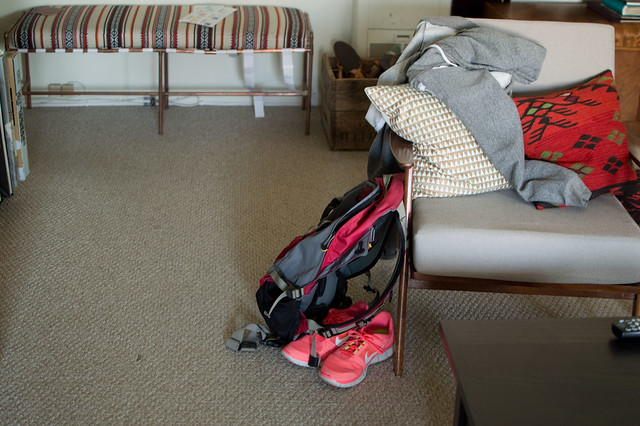 {gear}
It took me a full month to think about the logistics before I decided to just try it and see how it went. Now I've been doing it for just over two months and I'm hooked. Get ready for an incredibly wordy post about running an incredibly short distance. I can't help myself.

(Minimal) gear:
Backpack
Running shoes
Clothes, ideally with a pocket of some sort


Basic routine:
Wake up, shower if I didn't shower right before bed.
Make breakfast (smoothie or eggs) and package it up.
Run to work.
Get to work, sit down outside and eat breakfast while cooling off.
Get dressed, put on makeup, tell myself that my hair looks perfectly fine even though it's about a 50/50 chance.
Hang up my running clothes to dry out, start my day.


I'm using a Camelbak with the water insert taken out. It's more than enough space. I can put my entire purse in there if I want to and that's what I'll do if I'm planning on going out to dinner after work. It does add weight (at most, 15 pounds - I checked) and the first week will feel hard but then you get used to it. I don't think this Camelbak is meant for running. It has supportive straps (which you need, for sure) but they're meant to go around your hips. Great for hiking, doesn't work for running - those suckers ride right up. I end up cinching the straps around my waist instead and the end result is that the backpack sits a little oddly on my body and sometimes rubs my back. I'm considering upgrading to a better solution but running packs are expensive. If I find something that works, I'll update you.

Workout pants with a couple of good pockets are the best because I can tuck my phone into the front pocket and zip my keys in the back. Sadly, I only have one pair like this so I make do the rest of the time. I want to figure out a way to have a phone pocket on the straps of my running backpack. Some of the backpacks meant for running have them built in.

I do listen to music while I run outside but I'm careful about it. I only keep one earbud in and the volume is low enough that I'm still able to hear the street sounds easily. My route is very public so I'm not too worried about safety but I keep an eye out and an elbow ready.

I have the option of showering at work but it isn't completely necessary during coolish weather. I know, that sounds horrible. The key is showering right before you run and then giving yourself a cool off period before changing into your work clothes. 30 minutes is the best but 15 will suffice, at least for me. I don't sweat while I run, because the wind wicks it off but as soon as I stop moving I start sweating. During the summer, I will be showering.

Am I saving time? The time is almost a wash. Sometimes I beat the bus, more often it beats me by a few minutes. I avoid a lot of frustration though. There's no waiting for the bus to arrive and there's no sitting in traffic. I do leave the house a little earlier than normal because I have to build in the cooling off period. But I have to eat breakfast anyways, so the timing ends up being similar. I also consider this multitasking, because I'm getting in some exercise while commuting.

Some people that run to work are comfortable doing their cooling off in their office while catching up on their morning email. This might be okay in my workplace but I still feel weird about it and I prefer to cool off outside. It's nicer to change if you have a private office and/or a single restroom, but you can do it in the regular restroom. I now have favorite bathrooms around campus.

I usually run to work at least three days a week, and I average about 5 - 6 runs each week. Some days I only run one way or the other. Some weeks I'll run every single day.

The most direct route to my work is just a hair under two miles. It is not a pretty route. The 405 splits my commute right in half (and is also responsible for the horrendous traffic snarl that is motivating me to run in the first place). When I was planning this I tried to find a better one but there really isn't one. Oh well.

This mostly works for me because:
1. The distance is just right - a minimum of two miles, which I can increase easily with different routes. It's just long enough to make daily walking annoying for someone as impatient as me but it's short enough that I could start running it even without being in top shape. Other people who live further from work sometimes blend their commutes, busing it part way and then running the rest.
2. I have access to a shower at work if I need one because my gym is close by and I have a permanent locker there.
3. My normal commute is on the bus, so I always have the option of only running one way if I need to (although the traffic is even worse in the evening, so there is a high level of motivation to run both ways). 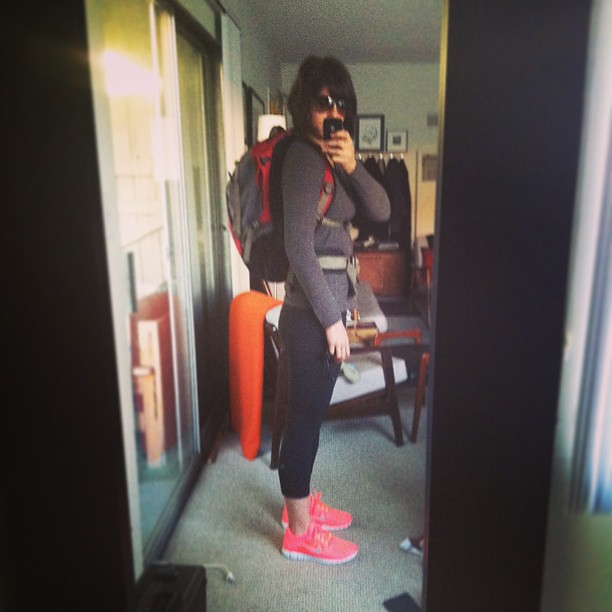 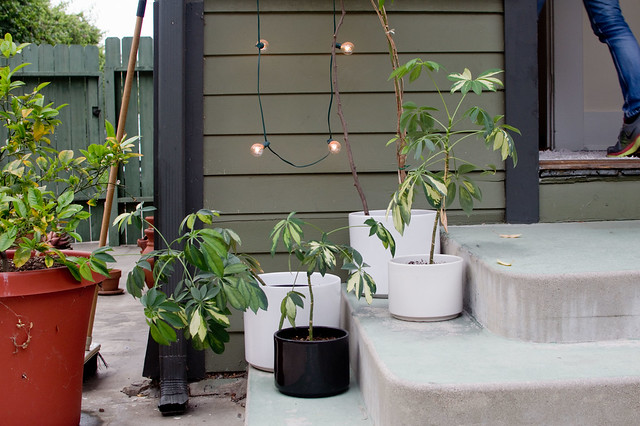 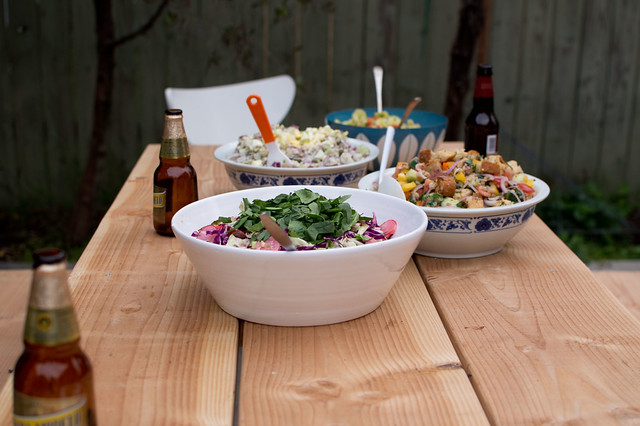 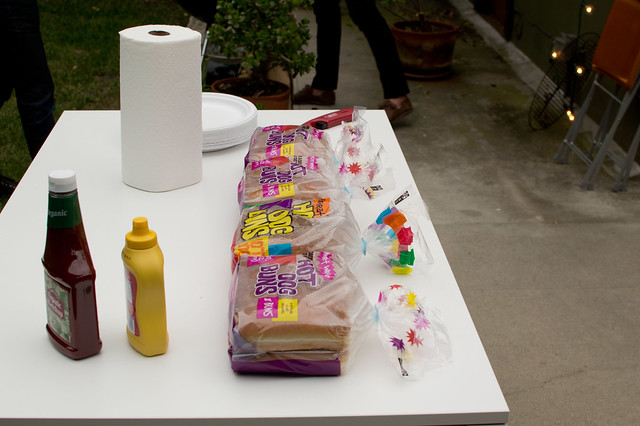 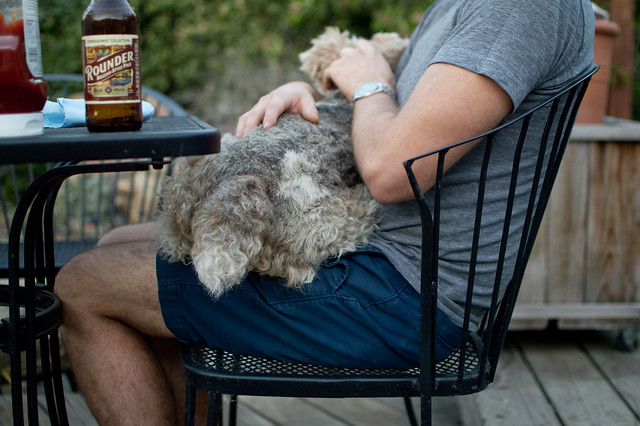 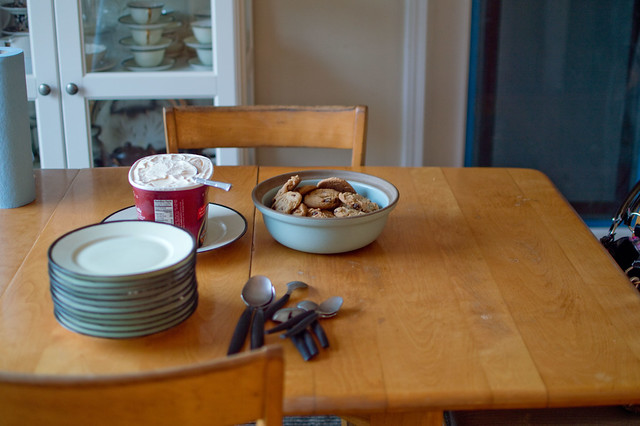 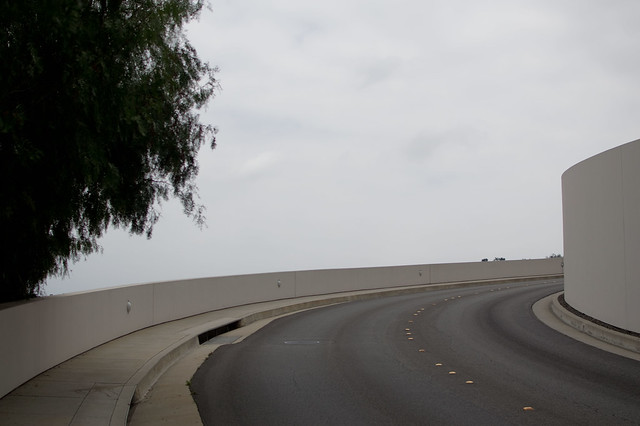 {road to the getty} 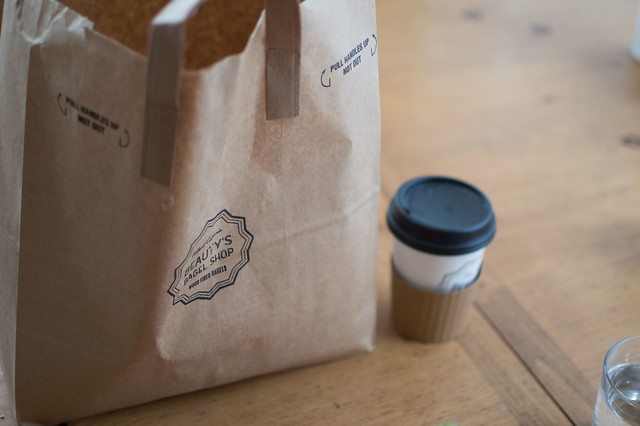 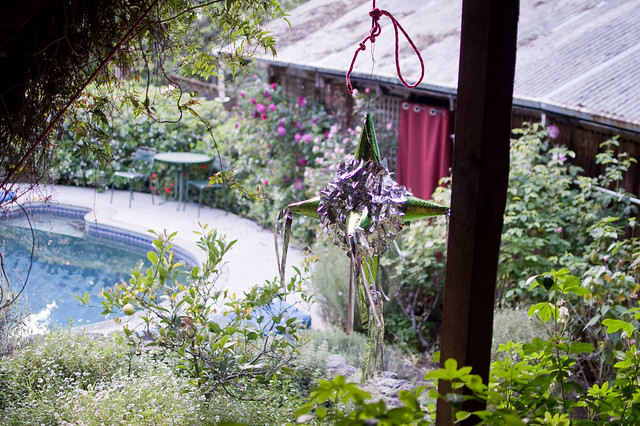 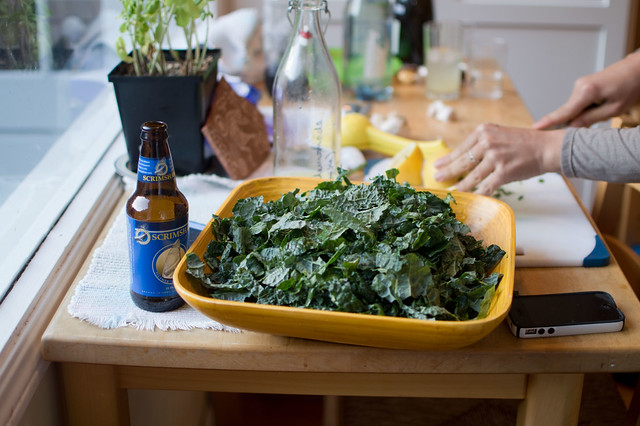 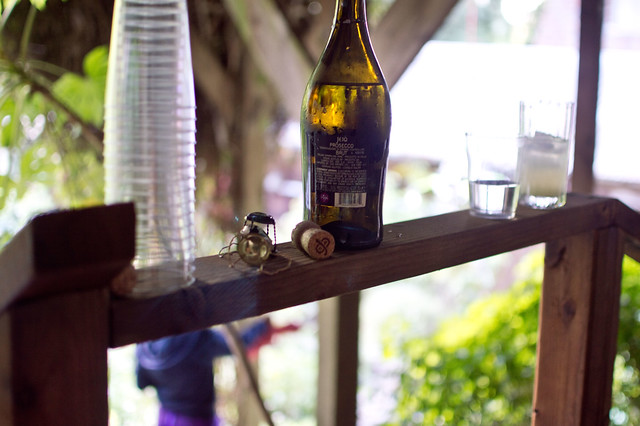 {popped}
I have been working, a lot. This isn't a plea for sympathy. I like working. It just takes up most of my time and energy, so there's not a lot of motivation left to hop on the computer at night and edit photos.

We've been barbecuing, a lot. With friends, with family, at home. The weather demands it.

I have made Kate's cookies three times in the last three weeks.

I spent a weekend in Oakland and Marin with some lovely ladies and came back feeling refreshed in that way you only do after a two day grown up slumber party. I've resolved to figure out a way to make this happen more often.

May is always crazy but in a good way. Birthdays, bridal showers, weddings. My goal is just to enjoy and make it through. I'll sleep in June! That's my motto this month.
Posted by Rachel at 9:57 AM 11 comments: