There are those nights when I come home exhausted and hungry and wanting something comforting. Sometimes I go all out and eat the Kraft macaroni and cheese that I keep stashed away in the back of my pantry (for emergencies only, I swear). In slightly less desperate situations, I make red lentil dal. It's quick, easy, and incredibly forgiving. It is still decent even if you are missing several of the ingredients. It also makes you feel much less ill (and much less guilty) than powdered cheese product. 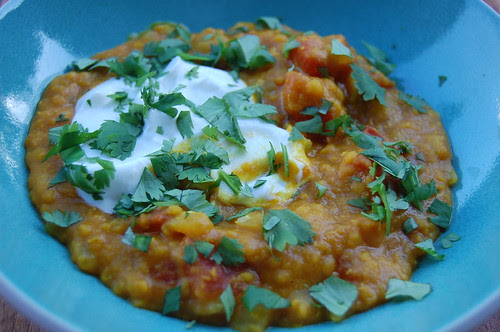 IngredientsDirectionsI top it with a big dollop of greek yogurt and eat it with Trader Joe's frozen naan (if you aren't keeping at least one package of TJ's frozen naan on hand, I strongly suggest you start - you can use it for eating with lentils or curries, or you can make quick mini pizzas just by adding some sauce, cheese and toppings).

If you are feeling particularly lazy you can skip out on sauteing the onions and just toss them right into the boiling water. As long as you know the basic proportions for the texture you want (notice that I use about 2 cups water to 1 cup lentils whereas the original recipe calls for a 3:1 ratio - I don't like soupy lentils!) you can basically add or subtract anything you want. When I don't have cilantro and jalapeno on hand, I often do a version with a big pile of fresh spinach and some lemon juice. Last night I was inspired because I had some lovely farmer's market cilantro left over from making the mango salsa, and I just couldn't bear to see it wither up and die in my fridge. 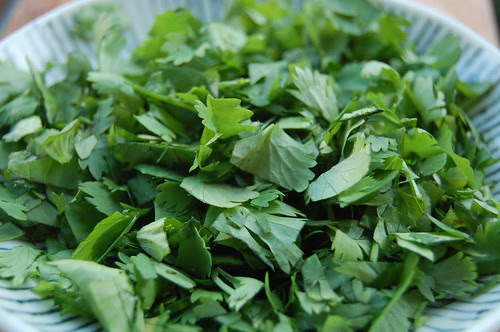 I know there are some crazy people out there who don't like cilantro (apparently it is an actual genetic thing with your tastebuds? In which case I will feel sorry for you, rather than totally bewildered) but I can't resist it. If you don't like it, go ahead and leave it out. You can always add parsley instead.

*Red lentils are also called masoor dal, and they are really cheap if you pick them up at a middle eastern grocery store. They cook much more quickly than normal lentils, which makes them great for weeknight dinners. They do lose their pretty red color during cooking, but the turmeric makes the final dish colorful.
Posted by Rachel at 5:03 PM