We put off our taxes until last weekend so we told each other we'd tackle them Friday night.

And then we got cocky. We weren't just going to do our taxes, we were going to enjoy them! And we weren't going to buy TurboTax, we are smart enough to do our taxes by hand!*  I made dinner and mixed up a couple cocktails and put on Sam's Town (it's our household power album) and we pulled out all our various documents.

Guess what? There isn't anything that makes taxes enjoyable. And I'd recommend not mixing them with cocktails because I spent 20 frantic minutes thinking we owed $3000 and while it was a definite buzz kill, it wasn't a literal enough buzz kill because the two of us together couldn't figure out where we'd gone wrong.

We figured it out eventually, printed everything and (thank god) decided to review it on Sunday before mailing. At which point we found two more major errors. I'm 99% sure that our final calculations were correct.

Note for next year - buckle down and do them in late March, celebrate with drinks afterwards. And possibly purchase TurboTax, if only to avoid the strange worksheet calculations.

I'm planning to post this week but I've been avoiding my computer. We'll see how it goes.


* My justification was that I did my taxes by hand for years but I had conveniently forgotten that it was back when I used the easy form and had no information to fill in. You can definitely do your taxes by hand but it takes a lot more concentration.
Posted by Rachel at 3:57 PM 24 comments:

I've mentioned in passing that I started Krav Maga classes and a few of you have asked about it. If there's anything I didn't address, feel free to ask in the comments and I'll reply. I'm not an expert by any stretch but I'm enthusiastic. 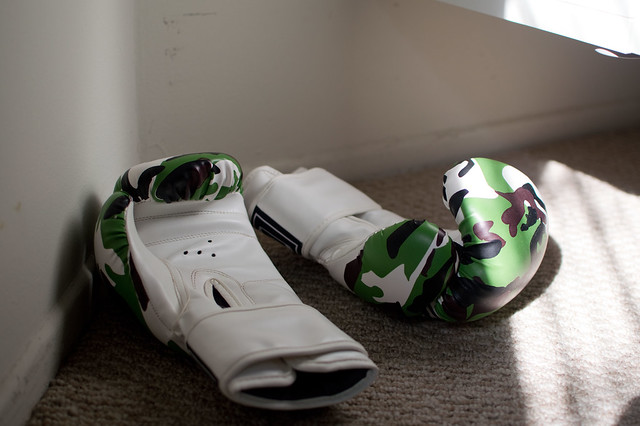 {gloves}
Krav Maga is fulfilling a lifelong dream of mine, which is to secretly be capable of serious ass kicking. I'm not sure where this originated because I've never been beat up by anyone other than my sister (we had some pretty good sister-style fights growing up) but I think it has to do with a disconnect between my mental and physical confidence. I won't hesitate to speak up in any situation but I've always been keenly aware that I'm pretty timid physically and if push came to shove I'm not sure I could hold my own.

I'd read about Krav, which is basically street fighting based on the Israeli Defense Forces training, and then a Groupon popped up and it was meant to be. After our Groupon was up we got a good deal on a year long membership and called it our Christmas gift to each other.

I've been going 5 - 8 hours a week since early December and I didn't start to turn a corner until a full two months had passed. I should have guessed this would be the case because my athletic coordination ranks just above that of a sea slug. I've spent most of my life trying to get out of any and all group sports, occasionally by hiding in a bathroom stall with a book (summer daycamp grades 4 - 6, I'm looking at you). I will run and swim and ride but please don't ever ask me to participate in any game involving aim. Krav isn't really choreographed but it does involve simple sequences of movements that I find incredibly challenging.

I hate being bad at things so it was hard to willingly subject myself to several hours a week of being the worst. I sometimes dreaded going. If I had a particularly rough class I'd feel bummed out when I got home. There's a lot of pressure because you partner up and working with someone below your skill set can really ruin a class. I'm keenly aware that I'm not the best partner yet and I feel guilty about it, even though everyone else presumably was bad at some point as well.

But, as I said, I started to feel a change around two months. I am getting better. When I have a good class, I feel amazing. I know from past experience (a few years of ballroom dance classes that were highly humiliating at first) that once I get the muscle memory built up I'll start progressing faster. I'm not going to let myself be limited by my comfort zone.

Obviously, Krav is very physical. It's focused largely on self defense but we learn offensive moves as well, so that we can hold up in a fight if we're in a situation where bailing out isn't possible. There's also a mental aspect to it. The instructors stress the importance of getting used to the physicality of being hit so that if you're ever in a situation where you do get hit, you have some frame of reference and you don't freeze up. I take this to heart because even in the safe environment in class my mind will blank out the second someone starts choking me, even though I know it's coming. And yes, people do choke you in class, but it isn't as creepy as it sounds.

We spend time punching (with boxing gloves and strike pads), kicking and doing drills. It isn't cardio most of the time, so I still need to supplement with a bit of running. I don't think I've lost any weight, but I am developing new muscle.

I also take immense pride in the gnarly bruises I often get. Not everyone appreciates them, so that could be a pro or a con depending on your point of view.

If you're thinking about taking a class, go for it. Wear exercise clothes you'll be comfortable moving around in. Don't get discouraged if you feel like you're behind. If you're naturally timid, try to break away from that - one of the most annoying things for an experienced person is partnering with someone who is afraid to touch you. Above all, SHOWER. I'm a generally clean person but I'm now obsessively clean. Knowing you're likely to end up in a headlock or clamping your thighs around a stranger's neck will make you more aware of that. You don't want to be wondering if your breath is okay when you're supposed to be focused on learning.
Posted by Rachel at 5:58 AM 17 comments: 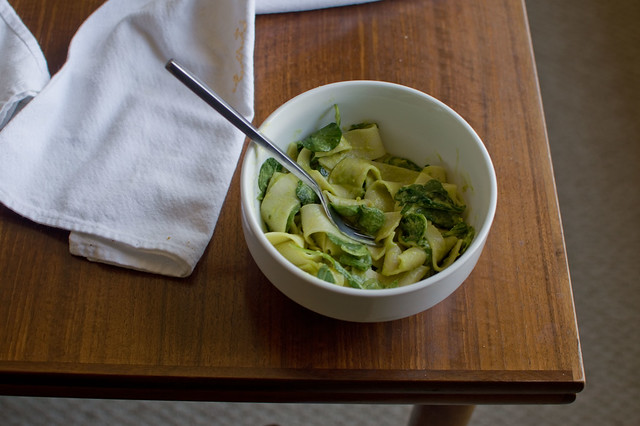 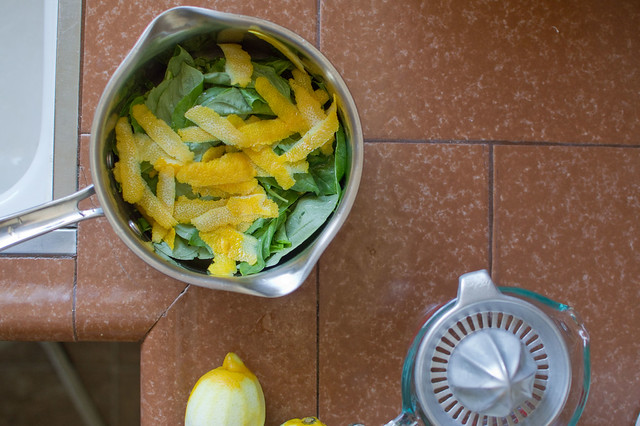 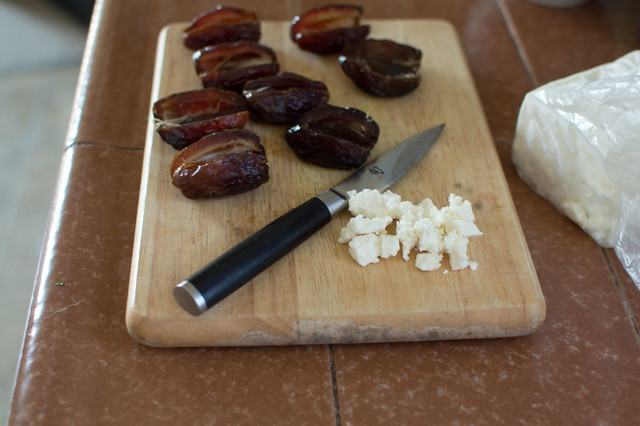 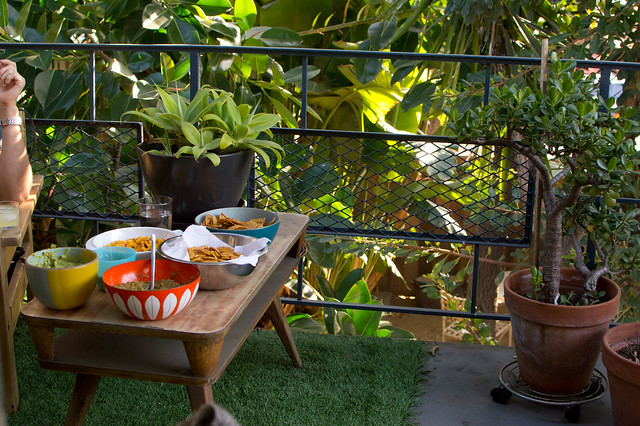 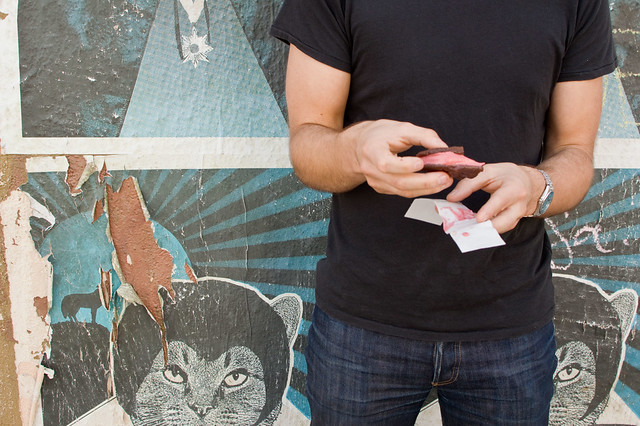 {coolhaus + space cat}
We cooked (way too much food) on Saturday and then spent the whole evening eating it with a good friend. It was almost too chilly to sit out on the balcony but we braved it.

Prompted by this smart lady, we made it downtown for the NorthernGRADE event on Sunday where we resisted buying anything although I was sorely tempted by this gorgeous waxed weekend duffel and D by this jacket. We had to walk around the block a couple times before getting our willpower in check and then we got Coolhaus sandwiches and proceeded to make a huge mess of ourselves. Success?
Posted by Rachel at 11:19 AM 14 comments:

I make so much more effort with the table when I'm having a girlfriend over for dinner. Perfect excuse to buy flowers. 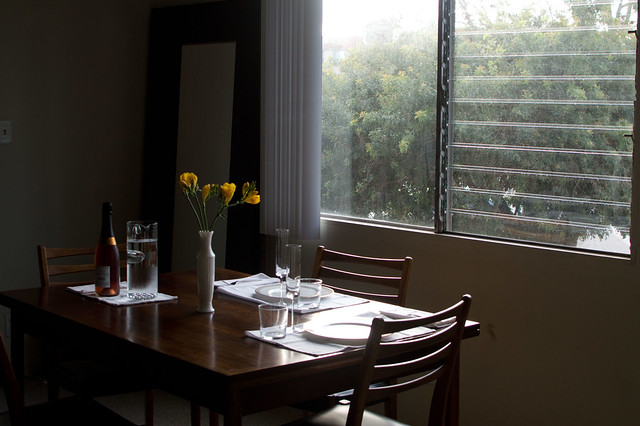 {set}
These freesia didn't even make it a full week, but they were lovely while they lasted. 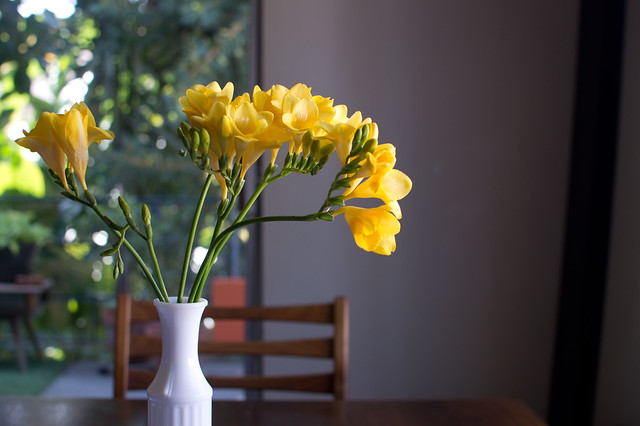 Little bits and pieces from the last few weeks ... 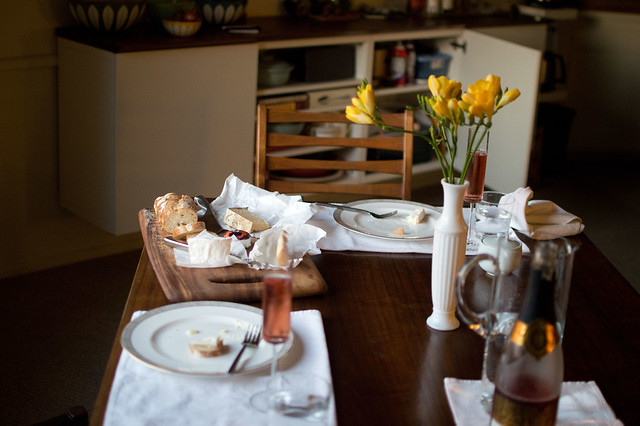 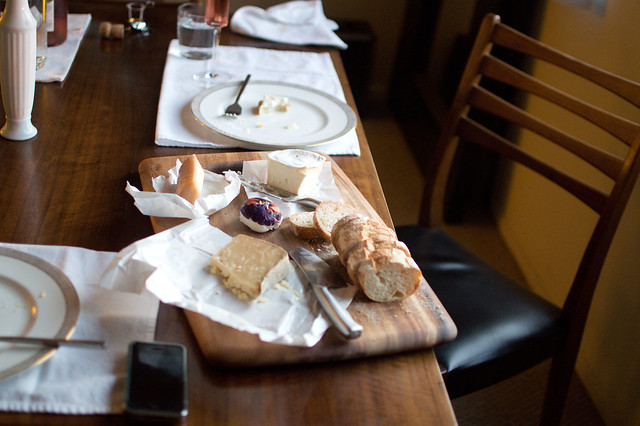 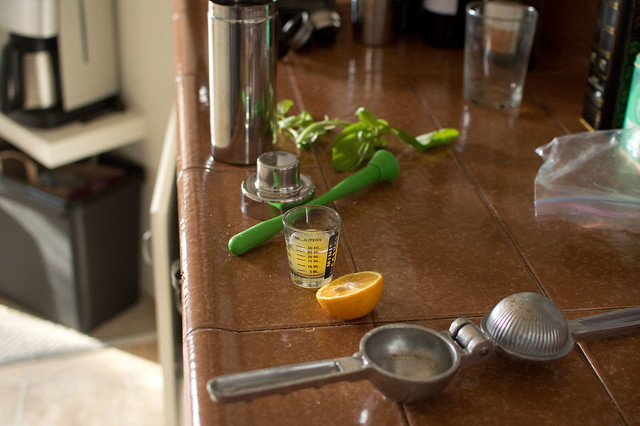 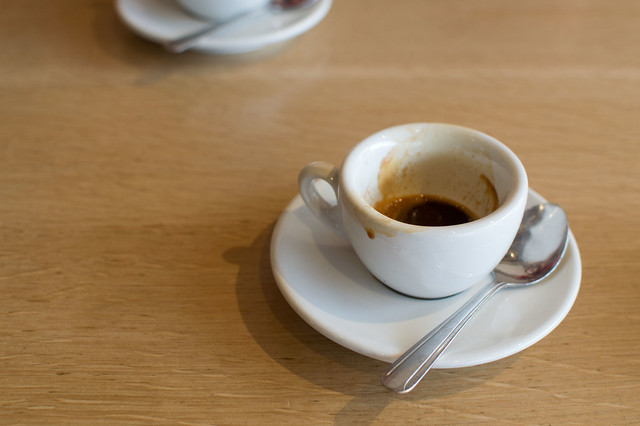 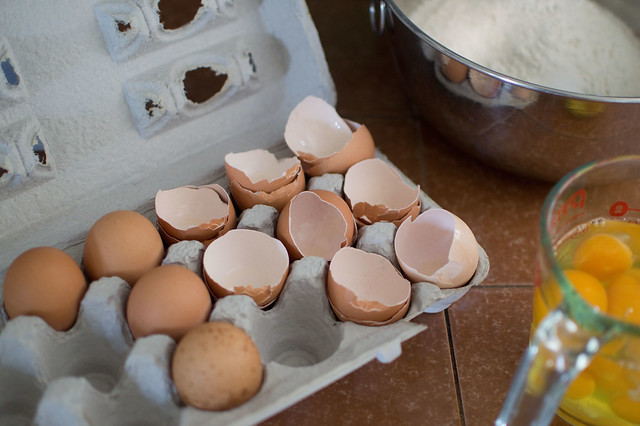 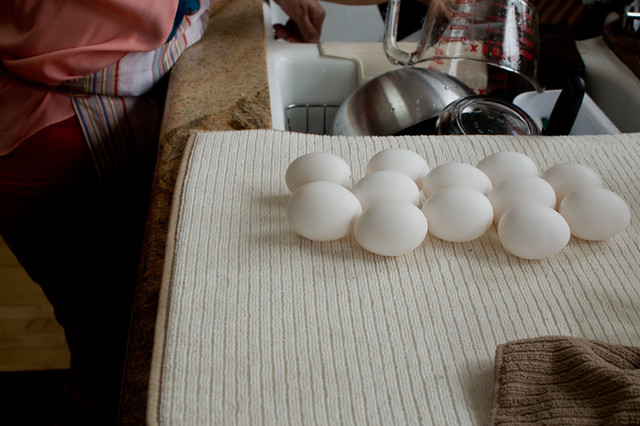 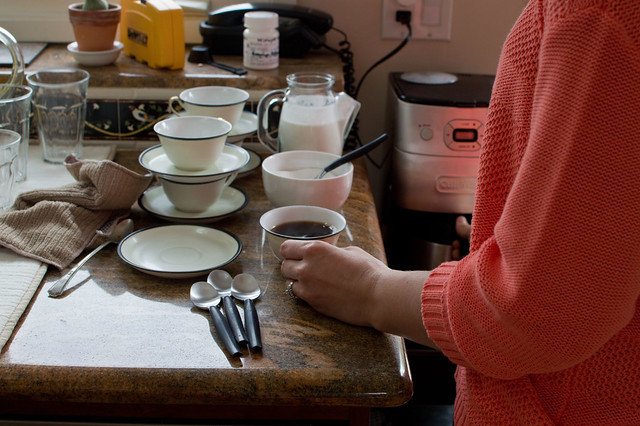 {coffee and cream}
Girls' night with Emily - a whole platter of cheeses and a bottle of bubbly. Almost none of that cheese was left at the end of the evening. We take cheese seriously.

Cocktail experiments have been happening. I'll share if I hit on anything really amazing. Even the misses are usually fun.

Afternoon espresso tasting with D. We're on the hunt for our favorite espresso beans and have to try all the contenders.

And, of course, Easter! I made cinnamon rolls, we ate quiche and drank coffee and decided that next year, definitely, we'll get ourselves together and make some kind of adult egg decorating tradition. We usually dye the eggs and hide them but the youngest person in our family is now a 15 year old boy and the egg hunt was starting to seem unnecessary. We ran out of time to figure out an alternate option this year but man, does D have plans for next year. Just you wait.
Posted by Rachel at 2:57 PM 19 comments: