I got quarantined by the department of public health due to possible measles exposure and wasn't allowed to leave my house (thankfully lifted after a week when they were able to run additional tests and confirm that I had immunity but it was a whole bunch of drama).

Dave died at the end of July, almost 11 years after the accident that made him into a totally different person. The actual death was sudden, although it feels strange to describe it that way when really it feels like it happened in slow motion. I used to mark the anniversary with a post each year but I stopped after year six, when I realized that nothing about that situation was fixable and I needed to spend some time working on acceptance. What that really meant, for me, was accepting that Dave was gone in most of the essential ways. I never was able to let go of the resentment I felt for the new person that took his place. I've tried to stop feeling guilty about that. If we're being honest, the new person was generally an asshole. That wasn't Dave's fault, and it wasn't the new person's fault, but it wasn't my fault either and it was the truth. It's hard to keep loving someone who is more often than not, obstinate, irrational, and mean. In many ways, I still resent that person, because I feel like the last decade has slowly stolen even the memories of Dave away. If he'd died in the accident, it would have been sudden and horrible and we would have grieved deeply but he would have been frozen in time at that moment. Instead, the memories of Dave pre-accident are all buried and mixed up with years of resentment and ambiguous grief. Now that he's truly gone, I'm hoping I can slowly let go of the anger and try to remember him as two separate people. Brain injury is complicated and individual and it'll probably take all of us years to process this experience. I feel like this paragraph reads as cold, a strange, dry ending to what was a huge chapter in my family's life, but that's where I am right now. I have some work to do, clearly.

Moving forward to unambiguous grief, our beloved Circe died in August, and we're still missing her feisty presence every day. At 14.5 years old, she'd been dealing with complicated health issues for a while, and we'd finally gotten a definitive diagnosis of Cushings disease just a week before. That Saturday I'd put Adrian down for a nap and I was freaking out because we'd just noticed the telltale red spots that signal hand, foot and mouth disease, and I was anticipating all the misery that would entail. So I was standing in the kitchen feeling stressed when Circe walked in, stumbled and then collapsed on the floor. I panicked, cradling her in my arms and shouting for Dustin. She was alert but not able to stand, so I rushed her to the vet's office, crying the entire way. They ran tests and checked her out but nothing was "wrong" - other than the clear fact that she couldn't walk and seemed to be getting less responsive. She was peaceful and didn't appear to be in pain so I decided to bring her home and let her pass in her own time (although we did call a vet who could come out to our house to euthanize her, in case she started to seem uncomfortable). It was a bizarre day, because we were hosting a family birthday party and everyone arrived just minutes after I rushed to the vet. So I came home, with a dying dog, and we just took turns holding her all day and eating cake while watching Adrian's spots get progressively worse. Circe finally passed away in our bed, early Sunday morning. We took her to back to our vet's office because I couldn't stand the thought of having her taken away by strangers. Our vet was there when we arrived (she doesn't work on Saturdays so we hadn't seen her the day before) and she hugged us and cried, and told me she'd reviewed Circe's chart first thing that morning and she felt sure it was a stroke, which was what I'd suspected as well. I'm still struggling to adjust to not hearing her little nails click as she walks around the house, to not having her snuggled up against me at night. 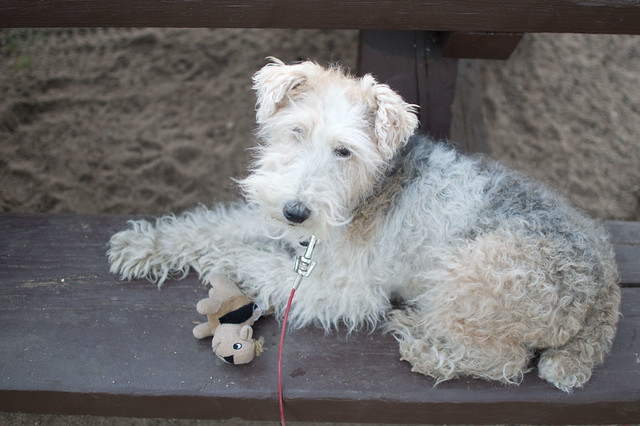 And yes, I know it's strange to post about losing a person and losing a dog in the same breath, and I realize that I'm grieving Circe far more than Dave right now. That's where I am. Missing Circe is uncomplicated, pure grief and it's easier to process. She was such a constant presence in our lives, and I'm grateful that she was happy right up until the end, and I feel lucky that she had her stroke on a Saturday because I don't know how I could have handled the irrational guilt if I'd come home from work to find her there alone.

Loss comes in so many shapes, and my struggle is always to accept it, to let myself feel it and to stop trying to rationalize it.

P.S. - Adrian did indeed have a raging case of hand, foot and mouth, and I can say with authority that having to wake up multiple times a night to slather cold yogurt all over your hysterical toddler in the bathtub (because you read somewhere that maybe, possibly, it could help) provides a bit of temporary distraction in the midst of grief, or at least makes you wonder what the fuck you did in a past life to deserve this.

P.P.S. - I know I keep promising posts to people and then forgetting to write them. I'm sorry! If I promised something and didn't do it, let me know! I have a bunch of drafts that I'll try to revisit and polish up when I get a moment (although my moments are few and far between these days).
Posted by Rachel at 6:09 AM 18 comments: