Traveling with a 16 month old 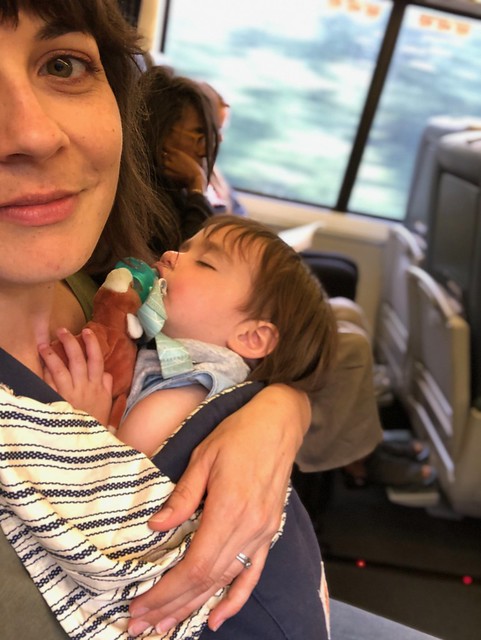 I was super nervous about our first cross country trip with a toddler. Adrian is an extremely active (read: rarely sits still) 16 month old and I was dreading the 5.5 hour flight. We didn't get her a separate seat because we are cheap and I knew we'd be spending more money getting to and from the airports.

For this trip we were flying into NYC and spending five days there before taking the train down to DC and staying there for three days. We were visiting friends, so we didn't have a crazy long list of places we needed to see and we tried to balance out activities we'd enjoy (museums, happy hours) with things she'd enjoy (splash pads).

I am definitely not an expert but I wanted to share some of what worked for us on this trip, in case it's helpful to anyone else.

I know I should probably break this post up but all I have time for right now is a brain dump. I'm sorry!

Packing - I tried to keep it light but there's a certain amount of baby gear we just needed. This is what we packed (in addition to clothes and diapers).
We opted not to bring a booster seat or high chair and it was fine for us.

Transportation - getting to and from the airport is so much more complicated with a baby because of the carseat issue (and the extra luggage, ugh). I really, really didn't want to take a carseat with us, because I knew we weren't going to rent a car on our trip and we were already lugging around a travel crib and a stroller. We do own a lightweight carseat (Cosco Scenara) which is a good option for travel but still a large thing to haul around if you aren't going to use it every day of the trip.

Driving/parking at LAX - I used a valet type service, where you swing by and pick up a driver on your way to the airport, get dropped curbside in your own car, and then they park the car for you and pick you up when you get back to town. It was pricier than self-parking (about $30/day vs. $12 per day) but so worth it. No waiting for a shuttle, no transferring your luggage. It saved us at least 45 minutes and a lot of schlepping on each end, which doesn't sound like a big deal unless you're traveling with a tired baby.

Getting from Newark to Brooklyn - I sucked it up and hired a car service and I was so grateful. The ride ended up only taking 35 minutes and they had a comfy, very clean car seat installed. I used Empire Limo.

Getting from Brooklyn to Penn Station - Lyft with car seat (this is an option in NYC). It's also legal to go without a car seat in the city but personally I wasn't comfortable being on the expressway without one.

Getting to the airport in DC - Uber with car seat (Lyft doesn't do car seats in DC, weird).

Surviving the flight - I think the best advice I read while I was preparing was to just accept that at no point during travel will you get to relax. I went into it with that mindset and it was better than I expected. Adrian doesn't like sleeping on the go, but I did manage to coax her into taking a one hour nap on the way over, so we felt like we got a little bonus break. Other than that we were definitely ON the whole time and she did pretty well. Our seatmates on both flights complimented her traveling skills, which was nice because I'd been so stressed out in the week leading up to our trip.

We prioritized flight scheduling over all else, which is why we ended up flying into slightly inconvenient airports. On the way over we took a 7am flight, which did mean we had to wake her up a little early but also meant she was more likely to take a nap on the plane, and ensured we'd be all settled in before bedtime. On the way home we took a 4pm flight, which meant that we landed just before bedtime. She fell asleep in the car on the way home and we were able to transfer her to her crib and she slept right through the night. We avoided red eyes because we both hate them anyways, and because we knew Adrian would struggle to sleep well in an exciting environment. I'd rather deal with a toddler who skipped a nap than a toddler who only got a couple hours of overnight sleep.

For the flights themselves I did pretty much all you can do, which is to pack new toys and books and slowly bring them out as the flight progressed. We also packed snacks but A is not super food motivated, so that was not as useful to us. What worked for us:

Window clings (monsters) - these were the biggest hit and totally saved us. They held up really well to multiple uses and we'd stick them all over the wall of the plane and on us and let her peel them off and restick them. I did NOT stick them on the back of the seat in front of us, because I knew that wouldn't end well. We did our best to pretend the seat in front of us didn't even exist so she wouldn't start touching it. I am completely failing at finding the exact ones we bought, but searching for window clings will turn up a million good options.

New board books - Adrian loves books so I will find any excuse to pick up a few new ones.

Pill box full of small snacks - I read this tip somewhere. I got a one week pill organizer and put blueberries in each slot (plus some for refilling). She enjoyed opening and closing all the slots and we'd get 15ish minutes out of each session. My one hesitation with this was that it's probably a bad precedent, teaching her to eat things out of pill organizers. But then I realized that if she manages to get her hands on a pill container she is 100% going to eat whatever is inside of it, regardless of whether she's done it before, because she's one of those kids who has to put everything in her mouth and we always have to be incredibly careful about what we leave lying around. Soooooo I'm still on the fence with whether or not this is good idea, honestly.

No mess marker book - not a huge hit. She hasn't really hit the coloring book stage yet, and this didn't hold her interest. I just grabbed a random one from Target but apparently the Melissa & Doug Water Wows are the ones you want, FYI.

Buckle toy - semi-interested? She loves the buckle on her backpack but wasn't as interested in this toy. Maybe a couple months too young for it.

iPad - we packed my iPad and downloaded a couple things from Netflix as well as the Petting Zoo app but it wasn't a huge success. We haven't started giving her screentime at home yet (I'm not against screentime but we both work full time and only have a few hours with her each day, so it hasn't felt necessary/helpful) and it just doesn't hold her interest right now. On the way home they still had the little TV screens in the seat backs and for some reason she was way more interested in that, so we put on some kids movies and they helped distract her a bit. Have to say, I am really looking forward to the day when we can just put on an in-flight movie and she'll be fully absorbed for a few hours.

Other stuff we had on hand that we didn't end up needing - crayons + paper (didn't use them), post it notes (apparently kids like to play with them but I think the cling films served the same purpose), bandaids (ditto).

Things we did NOT do: Use our tray tables. Allow her to walk in the aisle (or get out of the seat for any reason other than one quick diaper change). We know our kid and I'm 100% sure that if she knew the tray table existed she would want to open and close it a million times and there would be angry tears when we told her no. Same with walking the aisle. For me it's just easier at this age to not let her know things are a possibility vs. trying to enforce reasonable boundaries/limits, which are incredibly hard to explain to a stubborn toddler. I don't mind working on limits at home but I wasn't willing to do it while trapped in a flying metal tube with a hundred strangers.

What I wish I'd done: Remembered to grab a steamed milk in the airport before take off. I meant to but got distracted with gate check stuff and that sucks because it would have helped her nap more easily on the plane. There's no milk on board the plane. On the flight back I had some shelf stable milk cartons which was great for the flight but hell for security. You're allowed to bring fluids for babies but because the cartons aren't clear they have to open them for testing OR one of the parents can opt for a full pat down. Thanks to D for taking one for the team but the delay sucked. Next time we'll definitely just buy milk in the airport.

Handling the time change: The joy of traveling west to east on vacation is that we didn't have to change her sleep schedule. So she slept from approximately 10pm to 9am, with a nap from 3 - 5pm. She'd been slowly transitioning from two naps to one nap for a couple months, vacation was actually a great way to fully move to one nap because she was so distracted in the mornings. The later bedtime (and wake up) was lovely because we could eat dinner at an adult hour and then sleep in a bit in the morning. We had initially thought she might nap in her stroller if she needed a morning nap but we quickly realized that she was doing great on one nap, so we just made a point of always getting home by her nap time. She took a cat nap in the stroller once, but that was it.

Random tip: When we got to NYC we picked up some shelf stable milk cartons at Whole Foods (same kind I keep in our earthquake kits) so that we'd have them available in the diaper bag. Adrian doesn't normally drink milk while she's out and about at this point, but all the excitement and distraction made it harder to get her to settle down and eat real meals, so she'd sometimes get overly hungry and having quick access to milk was a lifesaver. Yes, you can buy milk cheaper in a corner store but that doesn't help when you're trapped on the subway due to a train delay. We only had to use the cartons a few times but I was really glad to have them. 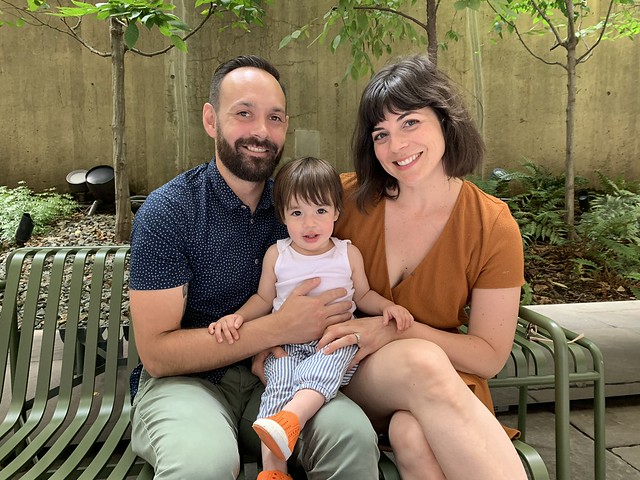 {hanging at the Met Breuer, formerly the Whitney, perpetually our fave}