Our one night camping trip to San Onofre was so much fun that we came home all pumped up and decided to make it a priority to make it out on more quick trips. We're keeping it within a strict two hour radius of LA, so that we can head out Saturday morning and come back Sunday afternoon without feeling completely exhausted.

Last weekend we went to Idyllwild. We stayed at Marion Mountain campground, which is a few miles above town (details about the campground at the bottom of the post). We stopped in at Idyllwild Bake Shop and Brew for some amazing sandwiches on homemade sourdough bread on our way up. They have a great beer selection as well, but we had Circe so we took our sandwiches to go (and honestly wouldn't have wanted to have even a single beer right before heading up the twisty mountain road). We made it to camp right at 2 pm and managed to get everything set up right before a rain storm broke out so we took advantage of the forced downtime and napped for a couple hours until it cleared up. The next morning after breakfast we hiked the Marion Mountain trail to San Jacinto peak. We didn't have time to hike the whole thing (I think it's 12 miles round trip, with a crazy elevation gain of 4,600 feet for a final elevation of just under 11,000 feet) so we allowed ourselves two hours up before we turned around. I think we made it just under 4 miles up and it was steep. Circe happily scrambled around the beginning of the trail but we tucked her in the backpack and traded off carrying duties for the rest of the hike. Once you enter the state park portion of the hike dogs aren't allowed, but we figured as long as she was in the backpack the whole time we'd be okay.

It was a perfect trip and I'd love to go back and get an earlier start so we could hike to the summit and make it back in time for 2 pm checkout. These little trips leave me feeling tired but also refreshed, so I'm glad we're making this a goal this year. 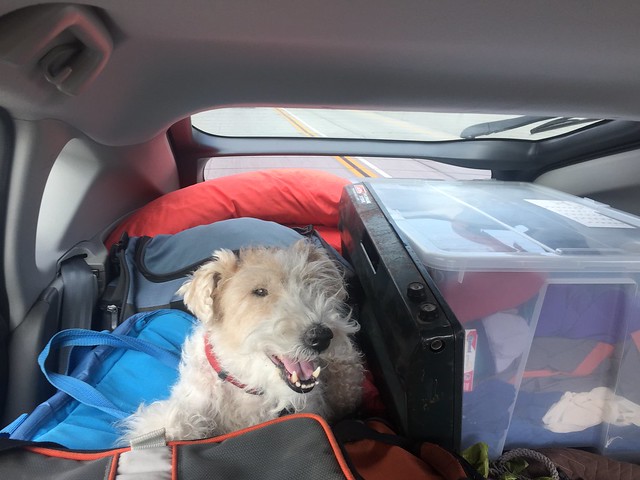 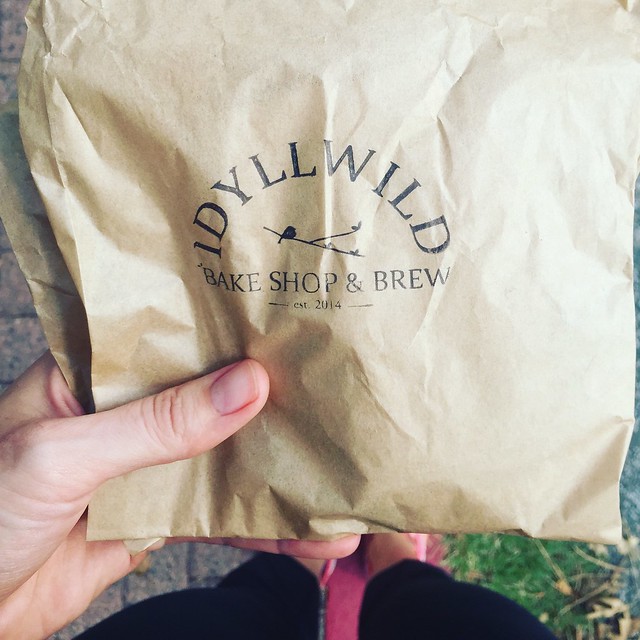 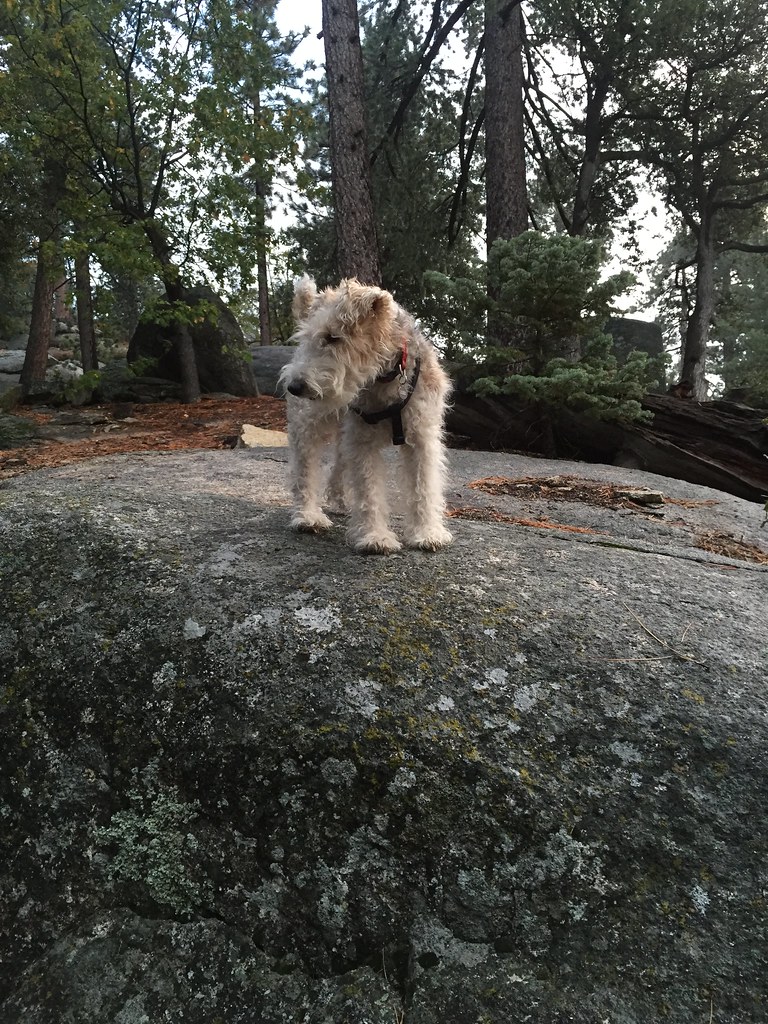 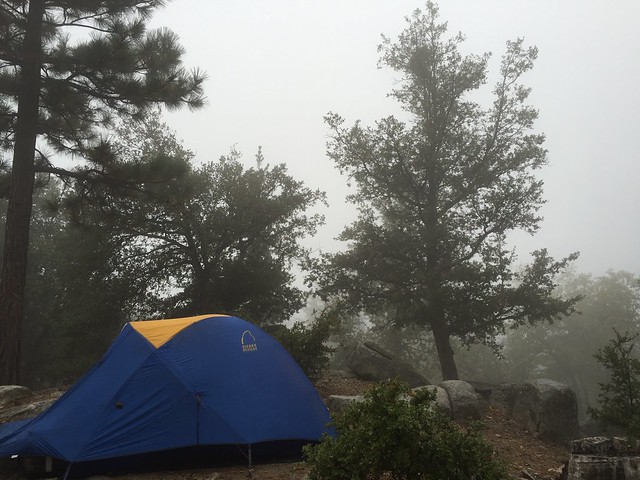 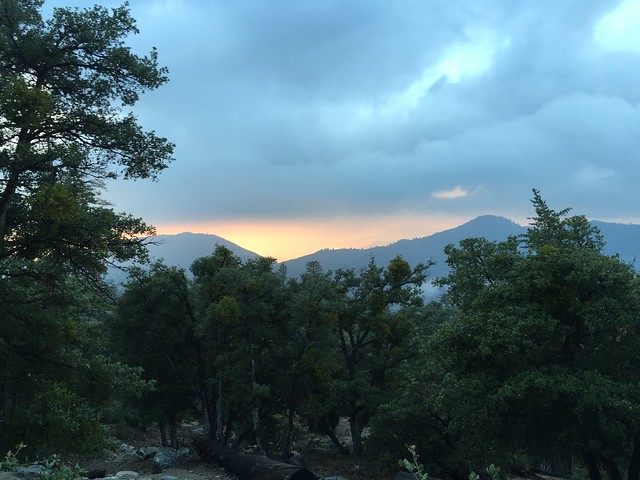 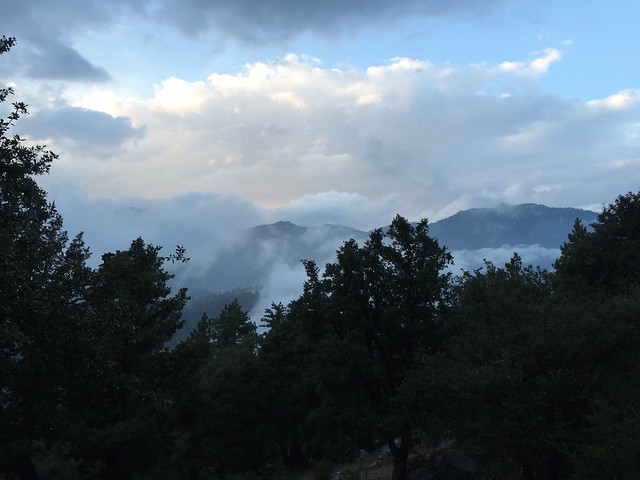 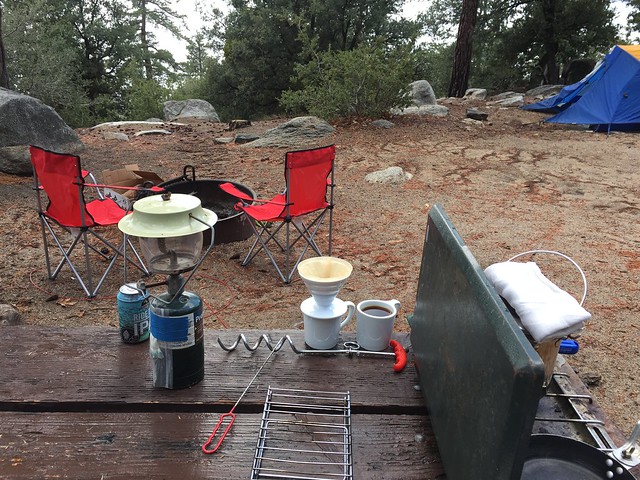 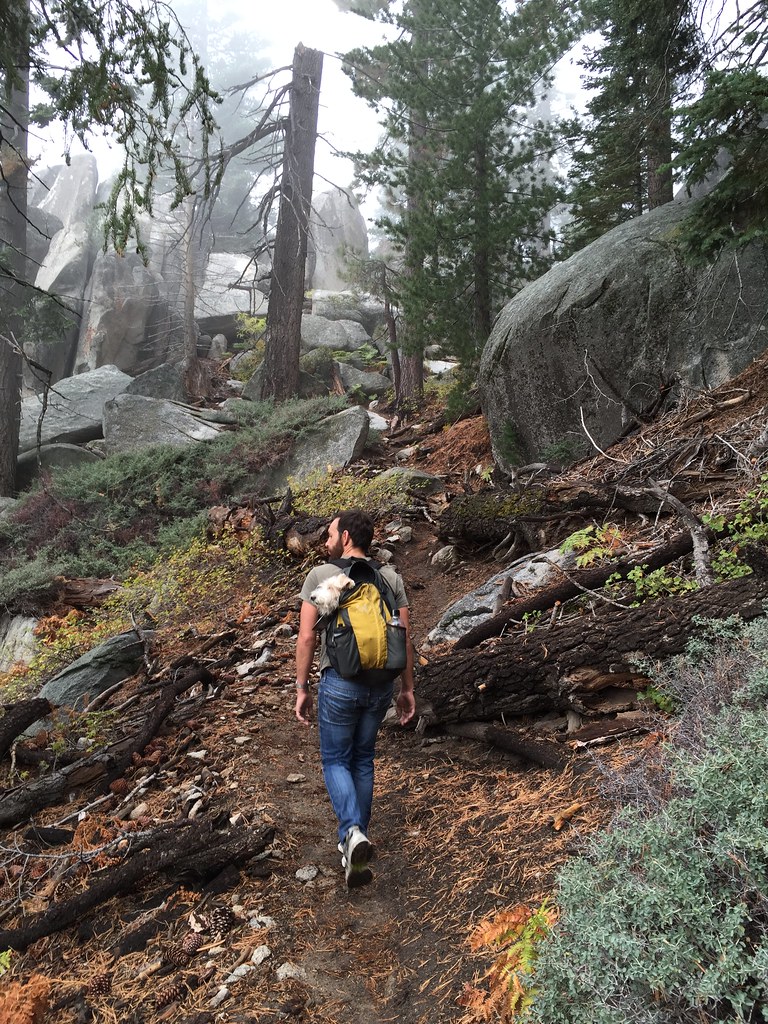 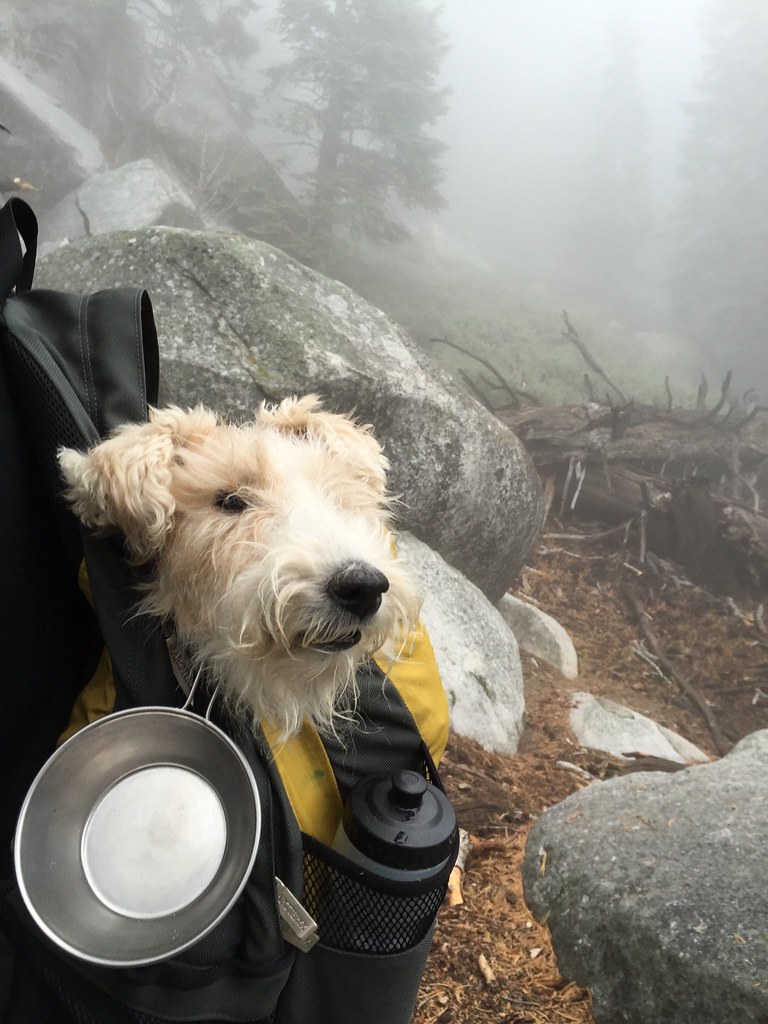 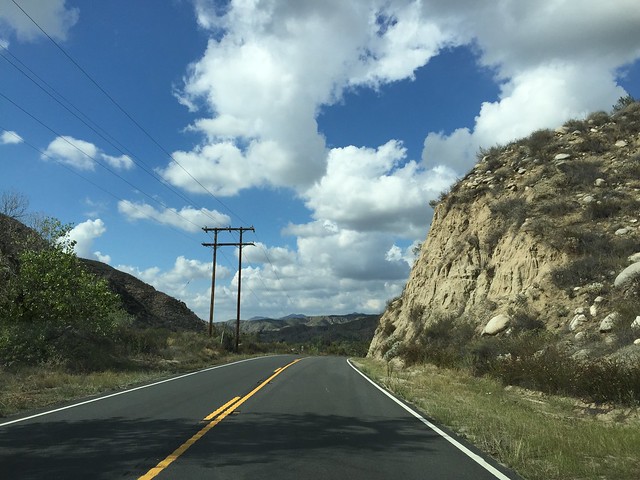 Campground details: Marion Mountain is a great little campground. The sites are close together but we checked the map and read some reviews and chose campsite 8, which turned out to be perfect. It's situated so that you have a little corner of the campground to yourself with a great view and it isn't too close to the bathrooms. There are chemical toilets and running water taps but no sinks or showers. For that reason I probably wouldn't plan a long trip (more than 2 nights) here. If you're thinking of going, check the campsite map when you choose your site but keep in mind that everything is closer together than it looks on the map. Site 9 might be better for a group with multiple tents because it has more space, although the parking situation would be tight if you didn't come in one car (true of all the sites, actually).

This is an honor system, so there is no ranger present and you don't need to check in officially. If you made your reservation online, there will be a sign posted on your campsite with the dates and you just park and set yourself up. You can also do first come first serve and use their self pay station. It's $10 per night (plus a $9 service fee if you book online). We booked online and I'm glad we did. The campground was entirely full on Saturday night and it would be a bummer to come all the way up there and have to turn around.

You do need a permit to hike the Marion Mountain trail, so if you're thinking about it make sure to stop at the ranger station in Idyllwild and pick one up.
Posted by Rachel at 6:10 AM 13 comments:

I went on a mystery binge the last few weeks and decided to go ahead and post them all now. This way anyone who isn't interested in mysteries can just skip this one. I love mysteries of all kinds and I'm always on the lookout for a new series or author. Some of these are recommendations from you guys - thank you!

The Silkworm - The second in the Cormoran Strike series (written by J.K. Rowling) and just as enjoyable as the first.

The Seduction of Water and The Drowning Tree - I'm always on the hunt for a "literary thriller" and wanted so badly for these to fit the bill. They didn't quite work for me, although they came close. I don't want to be a snob but I think the author was trying too hard to make them literary and the effort showed. Lots of academic references, which I'm down for, but almost always accompanied by explanation, which made the reading a little clunky. I know that if you don't explain references there's a chance that your readers will miss them, but I'm a believer in trusting your audience. I know that I miss out on many, many cultural references when I read because I'm a bit deficient that way, but I honestly prefer being a little confused to having things spelled out for me. Maybe that's just me?

Shades of Earl Grey and Sweet Tea Revenge - I'm not sure if I've already admitted that I read these, but it's embarrassing. They're cozy mysteries set in the South. Probably written at a fourth grade reading level, not at all gory, sometimes predictable, but for some reason I find them comforting. I'll check them out when my Kindle is empty and I'm reading them all out of order and it doesn't matter.

Death of Yesterday - The Hamish Macbeth series is really similar. Cozy mysteries set in the Scottish Highlands. Very simplistic, somehow enjoyable. I read this series and the Agatha Raisin series by the same author. Incredibly formulaic, but I keep getting drawn back to them so I guess the joke is on me? I mean, I did read the entire Baby Sitters Club and Sweet Valley High series growing up, so I clearly have a high tolerance for this type of writing.

Swerve - This is a straight up thriller, gory, fast paced and intense. That said, the gore passed a line for me (shocking, because I didn't know I had one) and at some point I was more grossed out than entertained. I waver on whether I would recommend this. Lots of people enjoyed it, but it didn't quite work for me, even though the twist was pretty great.

A Beautiful Place to Die - Loved this one. Set in South Africa in the 1950s, this is the first in a series with police detective Emmanuel Cooper. He's sent to a small town to investigate the death of a white police captain. I know very little about apartheid South Africa, so this doubled as a small history/culture lesson. I didn't know some of the terms that were used so I was googling as I read and I'm sure I was missing some of the nuances, but it was a really interesting setting along with a solid plot.

Renie Airth's John Madden series - I had read River of Darkness when it first came out and loved it. For a couple years I kept checking for a sequel but finally decided it must have been a one off. Apparently I gave up just a bit too soon, because The Blood Dimmed Tide came out in 2003, The Dead of Winter was released in 2009 and The Reckoning just came out this year (the author's charmingly old school web site still refers to the series as a trilogy, but something must have changed). They were all available at my library so I went on a binge and read them back to back. The first book is set just after WWI and the last one takes place just after WWII. It's a great series - nicely plotted with a good psychological bent.

The Girl on the Train - I knew that this couldn't possibly live up to the hype, but I enjoyed it despite that. I figured out the ending a little early (I think my brain was on overdrive from all the mysteries) which is always a bummer because then I'm rushing through the rest of the book because I'm a bit bored.


And since this post is just for mystery lovers, here are a few of my faves in the mystery world. I'm probably forgetting a ton, but I'll at least skim the surface.

Literary thrillers (are you as sick of this phrase as I am? Is there a better way to put it? Mystery novels, maybe?) - Rosamund Lupton, Tana French.

Serial killer craziness with maximum gore - Will Trent and Grant County series by Karin Slaughter (so curious about whether this is a pen name or if her genre was basically determined by birth). And, fine, the first few in the Kay Scarpetta series by Patricia Cornwell, even if the high tech computer references are totally dated and now hilarious. The series gets increasingly terrible, to the point where the newest ones are nearly unreadable, but some of those early books are solid.

Fast paced thrillers with lots of weaponry and a military edge - Jack Reacher series by Lee Child  - note there are some duds in there but most are solid.

Independent female PIs - Sue Grafton (OMGEE just saw that "X" is out and put it on hold!!!) and Marcia Muller (Grafton is funnier, Muller tends to be more emotionally complex, both are great).

One offs - The Poison Tree by Erin Kelly (didn't like her others).

It goes without saying - Agatha Christie.


It's time to restock my shelf and I should probably break out of the mystery habit for a bit. Unless there's something amazing I'm missing out on? I know there is this whole thing about reading light stuff in summer, but I think mysteries in fall/winter are really where it's at.