Whew. We got home from vacation and then everything got crazy. There's been a lot of good stuff (parties with friends, a short camping trip, a bit of actual cooking) and some not so great stuff (two colds in three weeks = thumbs down emoji). There has also been some reading ... 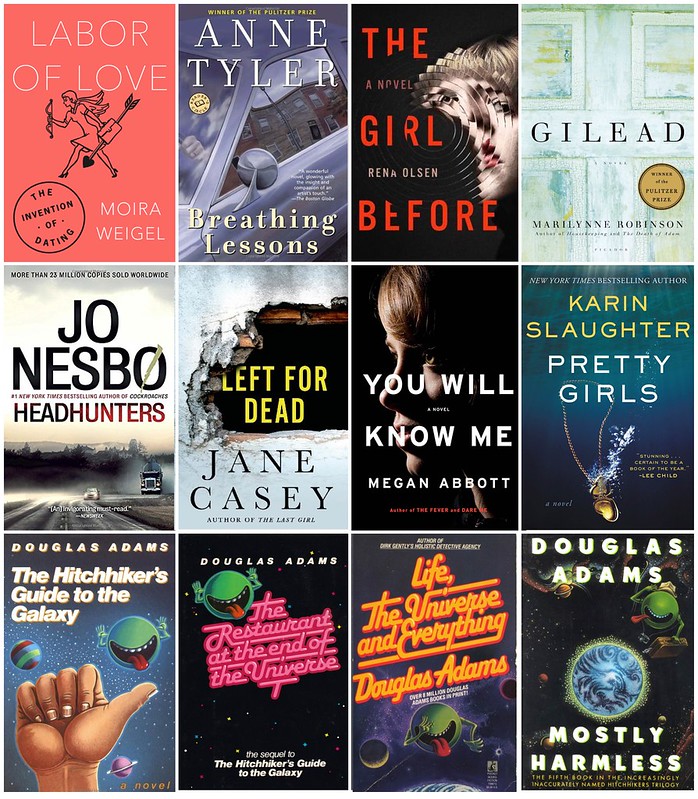 Labor of Love: The Invention of Dating - I found this really interesting and chock full of trivial pursuit type facts that go over well at dinner parties (did you know that TGIF's used to be a hip singles bar?).

Breathing Lessons - This novel won a Pulitzer, but I had a hard time loving it. It's easy to read, the writing is good, but the characters are so darn frustrating. I don't really love reading about contentious marriages (listening to people bicker is my number one peeve), even when it turns out they really do love each other.

The Girl Before - This book has a really unusual premise (it's tough to say much without giving everything away), and it's done fairly well. I wouldn't really call it a thriller but it's tense and interesting. The ending is the weak point for me, but it wasn't a total deal breaker, it just felt a little simplistic. But who knows?

Gilead - So, so lovely. Marilynne Robinson is one of my favorites. I had avoided this book for a while because years ago I heard that it was all stream of consciousness and difficult to get through. I found that to be not the case at all, and I loved it. It's the partner book to Home (Gilead was written first, but I read them in the opposite order).

Headhunters - Don't hate me, but I usually shy away from Nordic thrillers because they tend to be so dark (often literally, there is very little sun and lots of descriptions of winter). But I've read a couple of Nesbo's Harry Hole books and enjoyed them, so I picked up this stand alone mystery to take on vacation. It is ... weird, but good. Very gripping, lots of tense action. There is a dog death that I could tell was coming (spoiler, sorry, but it isn't super integral to the plot and I think fair warning is required on animal stuff) and I almost quit before it arrived, but I pushed through and just tried not to think about it.

Left For Dead - This is just a novella, but it's a prequel to the wonderful Maeve Kerrigan detective series. If you love the series, you'll want to read this.

You Will Know Me - I have tried a couple of Megan Abbott books and they just don't do it for me. The writing feels like it's working too hard, and as much as I love movies about cheerleaders or gymnasts (nothing will ever match my love for Drop Dead Gorgeous), apparently I don't love reading about them. That said, this is a well plotted thriller that lots of people loved, so I might be an anomaly.

Pretty Girls - Karin Slaughter's mysteries are always gruesome (p.s. - do we think she was born with that name and if so, did she have no choice but to start writing thrillers? Emily and I were talking about this the other day and we think it must be a pen name) but I generally like her series. This is a one off and it was a bit too much for me and the payoff wasn't good enough.

Re-read - The entire Hitchhiker's series. Every time I read this I marvel at how much I love it all over again. It just doesn't get old to me. I have tried to tell Dustin the train station biscuit story at least a dozen times, because I laugh every time I think about it. (The story is here, Adams claimed it actually happened to him and he then wrote it into the book, and interestingly, when I googled it to find a link for you, there is a whole Snopes page about it. Whether or not this is true, I will always remember reading it at 13 years old and nearly crying with laughter. The version in the book is better because you know Arthur Dent so well you can picture it happening.)

I'm currently on the wait list for a bunch of stuff, including a few thrillers (particularly appealing in Fall, I think) and I'll report back once I get them. Anything I should be adding to my list?
Posted by Rachel at 6:02 AM 20 comments: