This might be one of my new favorite recipes. I found it on the internet, but it is originally from Seriously Simple Holidays by Diane Rossen Worthington. I own one of her other cookbooks, The California Cook, and a couple of my standbys are out of that one, so I trust her.

I was a little weirded out by the idea of savory bread pudding initially, but it's delicious. It's perfect for when you host brunch, because everything gets set up the night before (and the prep is pretty minimal, anyways) and all you have to do is take it out of the fridge and bake it the next day. The only thing I love more than a good meal is a good meal where I barely have to do any work.

At D's request, it has transitioned from brunch to dinner. I prepped the ingredients the night before (chopped everything, got the bread cubes ready, cooked the bacon), then mixed it all together in the morning, left it in the fridge all day and baked it when I got home from work. Easy peasy. 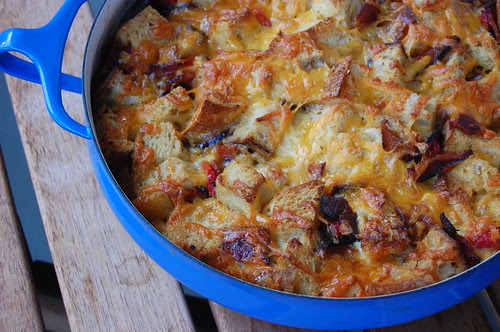 I'm posting her recipe here, but adding a couple of comments in italics throughout. I haven't tried any substitutions yet, but I'm sure I will eventually. Well, I guess being out of spinach and just leaving it out is kind of a substitution.

Serves 6 to 8 (I've tested this and it serves 6 very hungry people - you can cut the recipe in half, which is what I often do)

In this quintessential Christmas brunch dish, crisp, mahogany-red bacon and red peppers contrast with bright green spinach leaves. The pudding makes breakfast or brunch a one-dish meal, though I like to serve it with a winter fruit platter (not totally sure what a winter fruit platter is, but whatever). Remember to start the recipe two days in advance, as the bread cubes need to dry out and the pudding must set before baking. Don’t worry about this – I usually do it in one day and it just sits overnight.

1. One day before preparing the pudding, place the bread cubes on a baking sheet and let stand at room temperature overnight, or until the cubes are dried out (or stick them in the oven at 375F for 10 minutes, shaking them around a few times until they are hard).

2. The next day, in a large skillet, cook the bacon over medium-high heat, turning once, for 5 minutes, or until evenly brown and crisp. Remove to paper towels to drain. I always cook bacon in the oven, because I am terrified of being splattered by hot grease – just lay the bacon out on a cookie sheet and bake at 375F for about 15 minutes, turning occasionally. I also pour off excess grease once or twice during this time.

3. Butter a 9-by-13-inch baking dish. Arrange the cubes in the dish. Scatter the bacon, peppers, and spinach leaves evenly over the cubes. Sprinkle with the 2 cups cheese. With a large spoon, evenly distribute the ingredients. It's easier if you just mix everything together in a big bowl and then toss it in the buttered dish.

4. In a large bowl, whisk together or beat with an electric mixer on medium speed the eggs, milk, mustard, and salt and pepper to taste until well blended. Ladle the milk mixture over the bread, using your fingers, if necessary, to press the bread into the liquid. Sprinkle with the 1/4 cup cheese. Cover with aluminum foil and refrigerate overnight. I actually wait to add the cheese on top until I uncover it the next day, because otherwise the cheese sticks to the aluminum foil and it’s a bit of a mess.

5. The next morning, remove the baking dish from the refrigerator 1 hour before baking (I didn't want to wait a full hour, so I filled the sink with about an inch of hot water and set the bottom of the dish in it for about 10 minutes - just to take the chill off) and preheat the oven to 350 degrees F. Bake for 45 to 50 minutes, or until slightly puffed, set, and browned on the top. If the center is still underdone, push the bread down with a wooden spoon to help the bread absorb the liquid. Bake for a few more minutes. Let rest for a few minutes and then cut into squares. Serve slightly warm or at room temperature.

Make up to 4 hours ahead, cover, and keep at room temperature. Reheat in a 350 degrees F oven for 15 minutes, if desired.

The Clever Cook Could: