Trying to pretend my pants fit. May is birthday month in my family and I've been living on a steady diet of cake and pie for the last three weeks.

Planning a very short trip to Portland next month and feeling only mildly guilty that my Google map consists of 90% drinking, 5% eating and 5% gardens.

Debating whether or not to rat out the people downstairs, who rented an apartment for the sole purpose of running a full time AirBnB. I'm trying to frame it as a philosophical opposition (full time AirBnBs limit available apartments in an already tight rental market) but really I'm mostly annoyed that they're making so much money off it and I'm also freaked out about bedbugs.

Reading Anne Lamott's Operating Instructions. No, I am absolutely not pregnant. I just like reading about people who spend as much time catastrophizing as I do.

Feeling frustrated because I have at least 5 solid posts ready to go but all my photos are trapped in my camera and I haven't had time to get them uploaded. Actually that's a lie, I guess, because I watched three back to back episodes of Grey's Anatomy last night (yes, I still watch it, I know the rest of you stopped 5 years ago and I don't care) when I could have been editing photos but I'm a month behind and I couldn't take it anymore (luckily I don't have to worry about spoilers, since you all stopped watching).

Wondering what I'm doing with my life, which I think is pretty standard in your early thirties. OR SO I TELL MYSELF.

Back shortly with actual posts, some of which might even be useful or informative. See you next week? 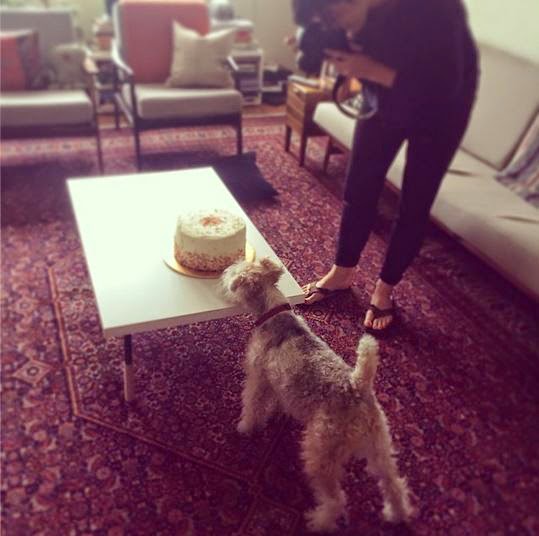 A photo of me taking a photo. Much to her disappointment, Circe didn't get to eat that cake.

Fennel and arugula are a pretty standard pairing, so this isn't a groundbreaking salad. It's just so good that I can't bring myself not to share it. You almost always see fennel and arugula with some kind of citrus and olive oil. This particular version has a little extra depth of flavor provided by anchovy paste.

If the mere thought of anchovies makes you gag, hold on. Let me try to convince you. I'm definitely a latecomer to all things anchovy. Once, while in a country where I didn't totally understand the language, I accidentally ordered a pizza with giant anchovies and I ended up having to exile the entire box to the fire escape just so I could sleep that night without the smell. I'm not normally picky about food, but those little fish skeeve me out.

I've started to warm up to them slightly due to my recent Caesar salad obsession. I still haven't managed to make one at home, but many of you clever readers suggested that I start with anchovy paste. And so I bought a tube. It is indeed much less intimidating than a can of fish, and I like that I can use it in dribs and drabs. 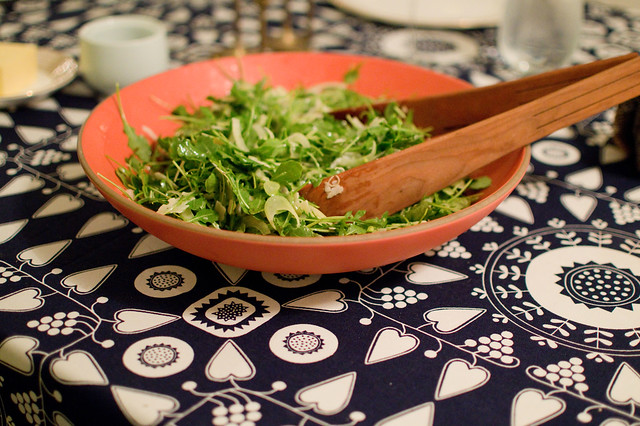 {arugula and fennel salad}*
This salad is spicy from the arugula, with good flavor depth from the dressing and aged cheese. Even if you don't normally like fennel, I'd highly recommend giving it a try. It's worked into regular rotation around here. It's even decent the next day (although better freshly tossed), which is rare in a salad.

Arugula and fennel salad (just barely modified from here, serves 6 - 8, depending on how salad hungry they are)

:: Whisk the lemon juice, vinegar and anchovy paste together, then add the olive oil in a slow stream. Season to taste with salt and pepper.

:: Toss the dressing with the arugula, fennel and most of the cheese in a large bowl. Add the remaining cheese to the top of the salad for a prettier presentation.

I used 7 oz of arugula instead of the 5 called for in the original recipe, because that's what I had. With that volume, I think using the full amount of dressing was exactly right, which makes me wonder if it would be overdressed with the lower amount. I also used 2 smaller fennel bulbs instead of one large one. And I left out the olives because I wanted to keep it really simple.

I used our vegetable peeler to shave the Parmesan cheese. I splurged on a nice aged cheese for company, but I've also made the salad with a slightly cheaper Reggiano and it turns out great. Two cups sounds like a lot (and honestly, I don't bother measuring), but you'll only need about 1/3 of a pound for this large salad. The shaving makes it go much further.

I used my mandoline for the fennel, on the super thin slice setting. I was worried that it still wasn't exactly "paper thin" but it was perfect. If you don't have a mandoline, just use a sharp knife and you'll do fine.

* I've been holding off on sharing this in hopes of getting a better picture, one not taken on a winter evening in artificial light. But I give up! It's been months and I haven't remembered to snap one and that is months that some of you haven't known about this salad, which is sad.