I love cooking (obviously) but that doesn't mean there aren't nights where, due to lack of time or sheer exhaustion, I want to be in and out of the kitchen in 15 minutes without doing a whole bunch of chopping and washing dishes. I reserve my fake cooking recipes for those nights. Fake cooking is slightly more involved than heating up a frozen pizza (which I also do, but I probably wouldn't post about it because there isn't much to say) but significantly less involved than creating a whole meal from scratch.

Most of my favorite fake cooking meals revolve around the frozen food section at Trader Joe's. I am a lifelong fan of TJ's, even if they were a slightly sketchy, slightly upgraded liquor store when I was a child. Even back then, they had an awesome cookie section and I loved their packaging. Fast forward 20 years and I am addicted to their frozen meals (okay, I am still in love with their cookies).

When they came out with their Prig Khing Green Beans I fell hard, even though the first time I cooked them I nearly choked from the spicy sauce fumes emanating from the wok. They actually don't taste as spicy as they smell while you are cooking them, so don't freak out when this happens to you. 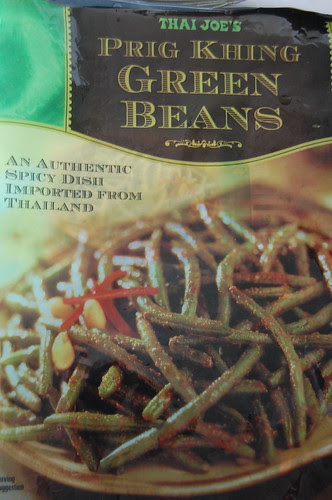 But green beans are not a meal on their own, in my opinion, no matter how delicious the sauce. I cook everything as directed, except I usually add additional frozen plain green beans (up to a whole bag extra) because there is a lot of sauce. While the beans are cooking, I chop up a block of tofu and dice a small handful of peanuts. I toss most of the peanuts with the green beans once they are fully cooked and then add the tofu and sprinkle some peanuts on top for garnish (classy, right?). I like the contrast of the cold, smooth tofu pieces with the hot green beans, but if you aren't into that you could gently toss everything together at the end and let it heat up a bit. If you aren't a tofu fan, this is probably the safest option. 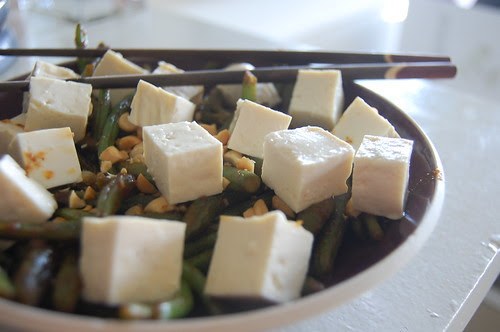 It's not vegetarian (sorry, Kris) because there is a bit of shrimp paste in the prepared sauce, but it is good for you. I usually get three to four main dish servings out of this, with the addition of extra green beans and tofu, and it comes out to about 245 calories per serving if you split it in four servings, 370 if you split it in three (estimate includes 1 tbsp of olive oil, as called for on the package, plus extra green beans, 1 package of medium firm tofu and 1 serving of peanuts), with some good protein.

Can you tell I'm trying to be a little more healthy after my long weekend? Let's just say that I ate three slices of (pink champagne flavored!) wedding cake on Saturday and then made trips to the cupcake shop on both Sunday and Monday, in addition to baking that evilly delicious caramel cake. Ouch. I'm on cake detox for a while.
Posted by Rachel at 7:00 AM