Last night was a total baking extravaganza. My girlfriend came over right after work and we didn't stop until 10:30 pm. Being a total OCD freak about my kitchen space, I was a little nervous about having a baking buddy, but luckily Stace and I share some similar compulsions. Namely, cleaning up as you go and working quickly without being sloppy. The kitchen never turned into a disaster, but we managed to make several double batches of cookies (at one point, we both had our cookie guns out, pumping away and it was pretty priceless - I wish I had a picture of that).

I made a batch of caramel cream cookies, which I'm actually pretty blah about, but most people absolutely love them. I think it's the thick layer of buttercream in the middle. They're also pretty simple and they freeze really well if you need to make them ahead of time. I usually roll the dough out and then cut it into tiny circles, but I was short on time so I just jammed the dough into the cookie press and popped out some little clover shapes. They aren't quite as elegant, but it was a whole lot faster and they still look okay. I added some of my Mexican caramel to the buttercream, because the buttercream doesn't take on much caramel flavor on its own, despite browning the butter first. 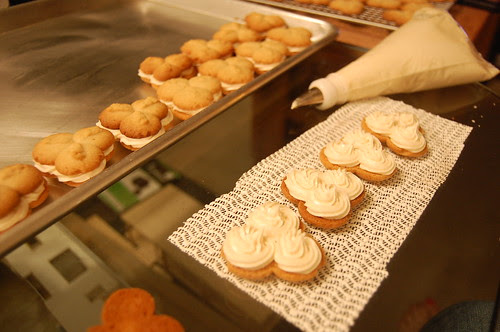 Here are the cookies getting ready to be sandwiched. Normally they would be round, but I think the cookie press clover shape isn't too bad. And yes, they are sitting on non-stick matting. Until I moved in with Dustin I didn't even know about non-stick matting, and now I'm OBSESSED. We lined all the kitchen drawers with it because it keeps the drawer inserts and the knives from sliding around. And then a little while ago I realized that putting it under cookies while you are piping on them is awesome, because the cookies don't slide around and make your life difficult.


I have approximately 12 million things to do today, including making a ton more cookies and designing fancy labels for all the food and packaging the favors (because I am crazy and I love cute labels even when they are totally unnecessary). I'm taking a short day at work to give myself a head start. I'll be back on Monday with a full shower re-cap and probably lots more cookie recipes. Don't worry - I swear I'll sometimes feature things other than cookies on here. I'm just stuck in a cookie place right now.