Leeks from our CSA box last week. I was tempted by this recipe, but these were a little too large. 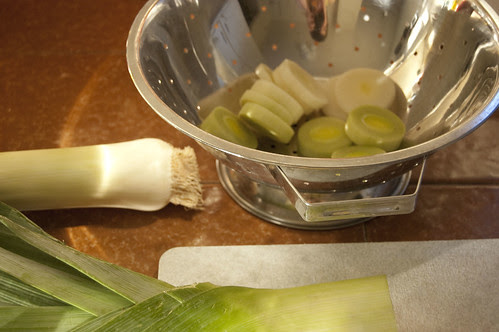 {leeks}
Quiche goes with just about any vegetable so I decided to employ it here. The leeks were sliced, sauteed with a knob of butter and a handful of chopped fresh sage until tender and almost melting. We had a selection of bell peppers as well, so I roasted them in the broiler - one of my favorite ways to handle the excess. I added a bit of bacon just because we had it, but this would still be excellent without it.

Weeknight cooking can be tough. I like to make my plan of attack before I even get in the kitchen, usually on the bus ride home. I start thinking about what steps need to be taken and when, to be as efficient as possible. If there is water to boil, I start it first. If there are onions to be sauteed, I chop them and get them started before measuring out other ingredients. I do this reflexively so I don't always remember to share my thought process with you guys but since this is a re-hash of an old recipe it seems like a good place for an example.

Game plan: To make the quiche, start with your favorite pie crust recipe (mine is here) and then pop it in the freezer to let it firm up. Next get the bell peppers in the top rack under the broiler and then slice and thoroughly wash your leeks. Saute the leeks with butter and sage until they're tender and then set them aside (the bell peppers are still in the oven, so check on them every once in a while). When the bell peppers are soft and fairly blackened, pull them out and turn the oven down to 350F. Grate your cheese and beat your milk and eggs together (quiche recipe here). Once the bell peppers have cooled, peel the skins off and chop them up. Assemble the quiche and stick it in the oven. If I have a spare second anywhere in the midst of everything (and you almost always do) I wash measuring cups and cutting boards and knives, so as to finish with as few dishes as possible.

I like cooking this way - super focused, almost constantly moving, but with a good enough mental map that it doesn't get stressful or chaotic. Add a glass of wine and some music to mellow it out a bit and it's not a bad way to spend an evening, even after a long day at work.
Posted by Rachel at 5:36 AM