So I bought some of those jars I was talking about last week. Here are my thoughts ...

32 ounces is not nearly as large in person as it is in my head. These wouldn't work for flour or sugar unless you like to buy those ingredients in very small portions. I can't even use them for nuts, because we buy them in bulk and they are, well, bulky. They are perfect for storing lentils and grains, however. 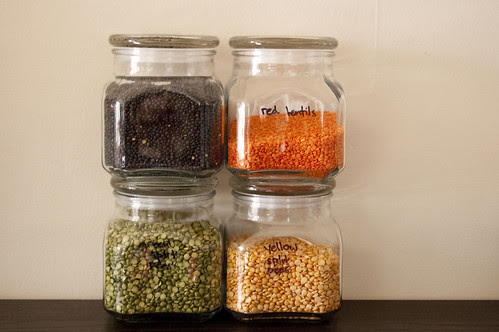 {emma jars, lentils}
The lids are not super tight fitting, but they have a little gasket so I think they're still air tight. Under no circumstances should you attempt to hold the jar from the lid only. Disaster will ensue.

They are kind of stackable. If you have them against the back wall of the cupboard, they'll be fine. But they aren't exactly meant for stacking, which is sad. 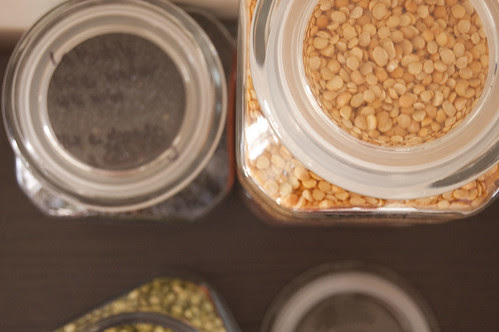 {emma jars, in use}
I wrote on them with the sharpie, but this time added some pertinent information to the top of the jar. Cooking ratios, times and serving sizes, for quick reference. 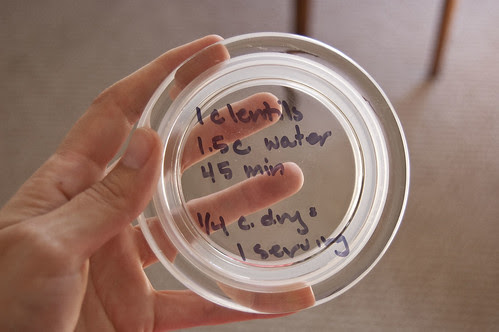 {instructions}
I think I need some of the 20 ouncers for couscous and rice, which I purchase in smaller quantities.They look a little lost in the larger jars.

All in all, they're a pretty solid addition to the kitchen and they're relatively affordable. The 32 ounce jars

were on 4 for 3 promotion, so I got 16 jars (4 packs of 4 and yes, I realize that I have a ton of dried goods - this only took care of my grain cupboard) for $54, with free shipping. The 20 ounce version isn't on promotion right now, so I'm holding off for the moment but I'm going to keep an eye on them.
Posted by Rachel at 5:15 AM