To date, I have not overcome my intense fear of deep frying at home. I could burn the house down, you guys. Or, on the other hand, I could master it so well that I exclusively eat deep fried foods for the rest of my life. I'm not sure which option would be more damaging.

So I stick with baking. Faced with a shiny fresh eggplant* last week, I cut it into thick slices and subjected it to the same treatment I use on zucchini. Egg wash, a bit of breading, oven baked. The eggplant comes out tender and meaty with a crisp exterior. Add a bit of marinara and some cheese (I used a burricotta, because that's what I had) and you're good to go. 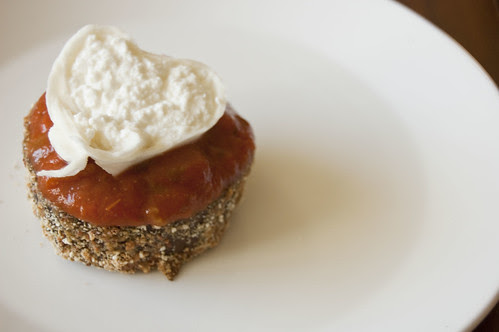 : Toss the bread crumbs, parmesan, herbs, garlic, pepper and salt in the food processor and blend it well. Alternatively, finely mince the garlic and use well grated Parmesan and just mix everything together. Put the mixture into a wide, shallow bowl and set aside.

: Slice the eggplant into nice thick slices (about 1 inch).

: Beat the egg in a wide, shallow dish. Dip each eggplant slice in the egg wash and then shake it off a bit and toss it in the breading. Lay the slices on a baking dish, making sure none of them touch.

: Top each slice of eggplant with warm marinara and a bit of cheese. Dig in. 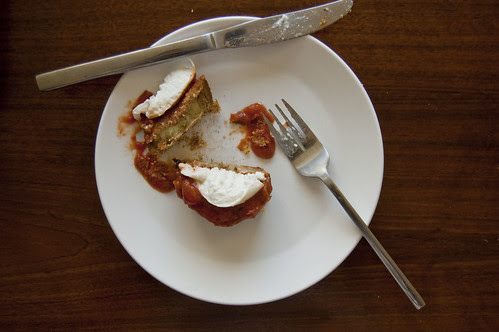 {eggplant, eaten}
* About eggplant - I know that people frequently complain of it being bitter, thus the salting and rinsing that you see in many recipes. I generally just take a small bite while it's still raw, to make sure it doesn't taste bitter to me and then I proceed. I've never had a bitter eggplant. Maybe I'm just not as sensitive to it? If you tend to dislike the bitterness of eggplant, you can always include a salting step right after you slice it. Just salt the slices well and set them aside for 20 minutes or so and then rinse them and pat them dry before proceeding.


** It looked like four servings, but we both ended up eating seconds. To be fair, we'd gone on a run and we were both pretty hungry and I had very little cheese to top it with. If you had more cheese, or if you were less ravenous, or if you weren't too knackered to make a side dish, you'd probably get four servings out of it.
Posted by Rachel at 5:04 AM