Although Roomba made his first appearance here on Monday, he's actually been an important part of our household for a long time. For those of you who asked, here are my thoughts:

I've had my Roomba for almost 4 years now, so the exact model probably isn't available anymore. He's a scheduler series and was purchased at Costco (I think he's most similar to this model

). Pricey, yes. But we have Roomba instead of a vacuum, instead of in addition to one. And I think he's cute. 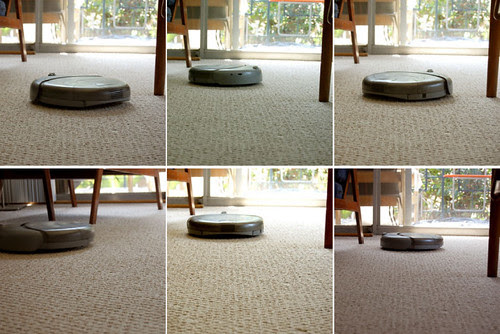 Why he works for us: We have a two bedroom apartment, one level, fully carpeted, no area rugs. He doesn't take up any closet space, which I love (he has a little dock that sits under the couch). He is low enough that he can go under all kinds of furniture that I wouldn't be able to get to with a regular vacuum, like our bed. Supposedly he works on hardwood floors, but I have no personal experience (sigh - hardwood floors would be heavenly) although he does okay on our linoleum in the kitchen. If you have area rugs, Roomba will get stuck on the edges and try to eat them sometimes. Not convenient.

Cons: Roomba is slow, compared to a human. He bumbles around and it takes him about 45 minutes to completely clean a room that a person could clean in 15 minutes. I don't care because I'm not lugging a vacuum around, so he can take as much time as he wants.

You have to clean him out each time you use him. This involves emptying the dustbin and (much more annoyingly) removing all the hair that's gotten caught in his brushes. He comes with a little grooming kit that makes this a little more fun.

Roomba's battery life is not as good as it could be. You end up needing a new battery

almost every 2 years, which drives me crazy, but hasn't gotten me to give him up yet. Batteries cost about $35. You don't have to buy vacuum bags, so I guess there's that.

Sometimes he goes haywire and spins around in circles. So far, I've successfully revived him every time. It's usually because he has dirt on his sensors, apparently. An occasional thorough spritzing with compressed air clears the dust out of the cracks and prevents the craziness (or cures it, if you've waited too long).

Yes, I do talk about him like he's a pet. Bizarrely enough, Roomba is extremely personable. I frequently catch myself watching him while he works. When I'm standing at the kitchen counter and he comes into the room he sort of nudges at my feet to get around me and I find it endearing. It's not just me. Witness the amazing Parks and Rec clips of DJ Roomba right here. Now admit that you kind of want one.
Posted by Rachel at 5:29 AM