A week (and a half) of no spending

This no spending thing of Joslyn's is working for me (note that the cake stands featured last week were all purchased before the start of the hiatus). I've found that the most effective strategy is immediately deleting all emails I receive about amazing sales, and resolutely not clicking over when other people post about such sales. Also, not going into stores.

I've found that not shopping frees up time. Monday, all aglow with the imminent prospect of change, I decided to take action in my closet. (It really does feel like the start of an era, doesn't it?)

Okay, I realize the pictures are too small and it doesn't look like the dramatic difference it really is. Will it help if I show you the pile of stuff I have to drop off at Goodwill? 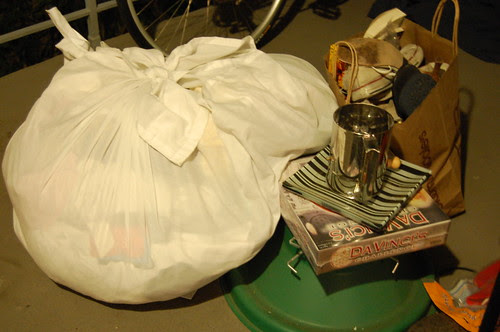 Yep, I had to tie up my clothes in an old curtain, hobo style. Because I don't have giant boxes or bags. (The Christmas tree stand, the sifter and the board game did not come out of my closet.)

I also have a stack of clothes requiring care (hemming, replacing buttons and general alterations) that should keep me busy.

And I realized that a lot of the things I was throwing out were things I probably shouldn't have bought in the first place. Cheap fabrics, poor fit, almost okay but not quite. I am definitely going to be revamping my shopping habits once I'm allowed to spend money again.

It also pained me to admit that I will never again be as rail thin as I was in college (huge amounts of work/stress and darting all over campus do wonders for your figure), but I am finally letting go.

Me: (holding up a pair of tight black pants) I love these so much, I hate to get rid of them.
D: They're hot, but I don't think I've seen you in them for at least 5 years.
Me: That's because I haven't been able to fit into them in 5 years.
*collective silence while we contemplate this fact*
Me: I'm getting rid of them.
Posted by Rachel at 5:59 AM