Potato latkes with a twist

We are absolutely overwhelmed with apples after our weekend expedition. That apple pie I baked barely made a dent. So now I have apples on the brain. And I decided to try something that I've thought of before in a musing sort of way.

I love, love, love latkes. Who doesn't? They are fried potatoes. There is nothing to dislike. I eat my latkes with both applesauce and sour cream. So I started thinking about adding the apples directly into the latkes. This is probably latke heresy, so hopefully I'm not horrifying anyone right now.

I started with a latke recipe from Deb's site, Smitten Kitchen. For my first try, all I did was add a couple of peeled apples to the food processor after I shredded the potatoes and onions. Unfortunately, the apple flavor was so faint as to be undetectable. Next I tried shredding and cooking the apples before adding them to the potato mixture (and adding an additional egg). This gave the latkes a distinct, but not overpowering, apple flavor. I still love plain latkes, but I'm glad to have something a little different to mix it up. 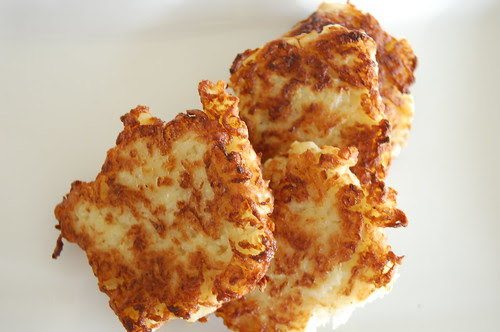 In a food processor or on a box grater, coarsely shred the apples. Add a little bit of butter to a small skillet and cook the apples on medium low heat for about 15 minutes. Add cinnamon, if desired. When finished, turn off the heat and set aside.

Next, shred the potato and onion. Transfer to a colander and squeeze dry. Let stand for 2 minutes, then squeeze dry again. Transfer the potato mixture to a large bowl and stir in the cooked apples. Add the flour, matzo meal, egg, salt and pepper and stir to combine.

In a medium skillet, heat 2 tablespoons of vegetable oil until shimmering. Drop packed teaspoons of the potato mixture into the skillet and flatten them with the back of a spoon. Cook the latkes over moderately high heat until the edges are golden, about 1 1/2 minutes; flip and cook until golden on the bottom, about 1 minute. Drain on paper towels. Repeat with the remaining potato mixture, adding more oil to the skillet as needed.

The apples make the latkes just slightly sweet and a bit tart. D still needed applesauce, so they didn't exactly supply all the apple flavor he needed. I am a fan but I will probably continue to make plain latkes as well.

You should definitely try Deb's latke recipe, even if you leave my apple experiment out of it completely. They are delicious and not nearly as intimidating as I expected.