I have been meaning to make a skirt forever. Lest you think that is an exaggeration, I scrolled through my archives to see when this fabric was purchased. January. Maybe not forever, but way too long for a project that takes less than two hours. 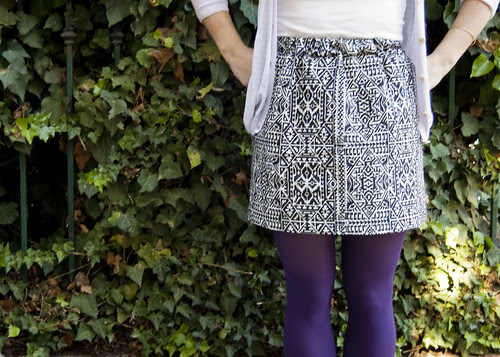 {print skirt}
The fabric is silk twill (was marked down from $20 a yard to $5) and it feels amazing.

I used the wonderful Freshly Picked elastic waist skirt tutorial but made a few changes of my own.

The tutorial calls for the length of your fabric to be double the width of your waist. This gives you a very full skirt, which looks adorable. On everyone else. I tried it on while it was pinned and quickly realized it wasn't going to work for me. I ended up using 1.5 times the width of my waist, and I love it.

I didn't have elastic quite as thick as I'd like for a defined waist band (3" would be ideal, I think). I was worried that my 1.5" elastic wouldn't really make a statement and would look lazy. So I made a simple fold over pocket and hid the elastic altogether.

To get the most out of my fabric, I cut two pieces for the skirt panel rather than one. I wanted the skirt to be a bit shorter, to wear with tights. My fabric was 45" wide, which meant that folding it in half gave me enough  length (22.5"), even once I allowed for the upper pocket for the elastic. That meant I could use the entire piece of fabric, rather than cutting off something twice as long and narrower. Sewing up one extra seam was definitely worth it. 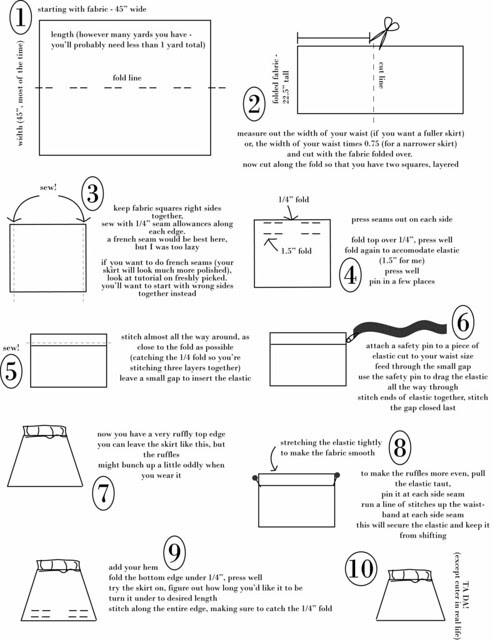 {click here for PDF}
For a quick summary of the steps I used, you can click on the link below the picture. Please note that I'm 5'6, so if you are very tall or very modest, this might not work for you. However, I had enough length to easily make the pocket for the elastic and I had a relatively deep hem, so you could certainly make a skirt a bit longer than the one pictured here using the same technique.

EDIT - I just noticed that if you're a newbie sewer, you might want a couple of additional tips, because I don't go into great detail on this step by step.

1. The iron is your friend. Every time you make a fold that you're going to want to sew, press it well. Every time you sew a seam, press it. For an open seam, like in step 3, you should press it twice. First press it flat to strengthen the bond between the top and bottom thread, then you should gently open the seam with your fingers and press it open, so that it lies nice and flat when you wear the skirt.

2. Pins. I hate pinning because it always seems like a tedious waste of time, but it was useful here. When you need to sew a folded seam, iron first to get a nice crisp fold, then add a few pins to keep it all in place. As you sew on the machine, pull each pin out just before you sew over that area. Once you're experienced, you won't need to stop the machine or even slow down much to do this.

I think that's it. If you have questions, feel free to ask in the comments! I'm certainly not an expert on sewing clothing though, so don't expect too much.
Posted by Rachel at 5:04 AM