I wasn't planning on making cupcakes last week. But as I was pulling out the tequila and limes to get ready for D's graduation celebration, I started wondering if a party without dessert would be much of a party. I'd seen recipes for margarita cupcakes floating around in the blogosphere, but I was feeling lazy and short on time and I happened to have a box of yellow cake mix (for emergencies! - you know, cupcake emergencies) in the back of the cupboard. 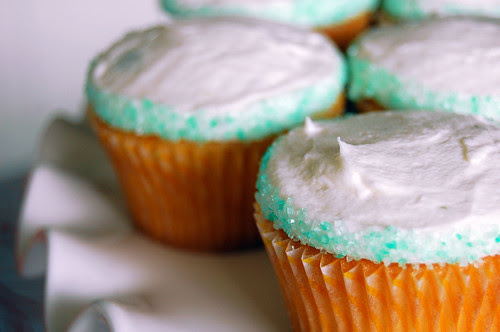 {margarita cupcakes}
So, a basic yellow cake mix, prepared as directed + a healthy dash of tequila + a couple tablespoons of lime juice + lime zest and we had delicately flavored cupcakes. I whipped up a basic buttercream, again adding a bit of tequila and lime at the end.

For the edges, I used coarse sugar, mixed it with a healthy dose of sea salt (taste to make sure you have a good ratio) and added a couple drops of green food coloring. Once the cupcakes were frosted, I simply rolled the edges in it. 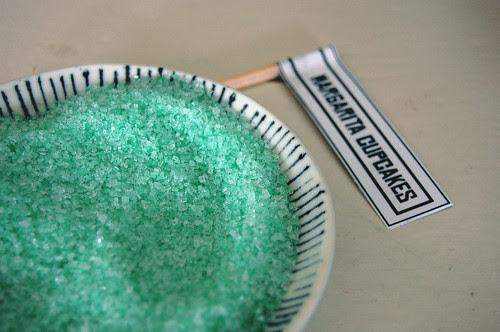 {sugar + salt}
Pretty, simple, and fun. I don't know if everyone would be a fan of salt on their cupcakes, but I loved it.

P.S. The empanada recipes were mostly from Smitten Kitchen. I made chicken with olives , beef with raisins (don't leave out the raisins - I know it sounds odd, but they make the recipe) and potato with chorizo and bell peppers. I also made my standby tomatillo salsa.

P.P.S. There is still time to vote for my sister's wedding over at Project Wedding. Go here and cast your vote. Hint - it features my homemade cake. Big surprise, right?
Posted by Rachel at 5:30 AM