D's grandma is up for a visit, and we had her over for a late lunch on Sunday. The last time she came over I made something that contained sundried tomato pesto and prosciutto, and although she was very sweet about it, I could tell that my scary gringa food kind of freaked her out.

This time, I played it safe and found a recipe for chile verde. 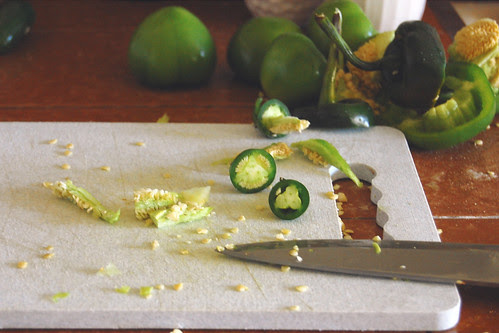 Chile verde (serves 6 - 8, recipe modified from this one)
Directions:

1. Toss the flour, salt and some pepper in a large ziploc bag. Add the pork, seal the bag, and mix it all around until the pieces are coated with flour.

2. Heat the oil in a large saucepan over medium high heat, and then brown the pork in small batches, transferring it to a plate when you finish one batch. Try not to burn yourself when the oil splatters.

3. Meanwhile, take the roughly chopped peppers, onions, garlic and tomatillos and spread them out on a large baking sheet. Roast in the oven (I use my broiler) until they are soft and the peppers are a bit blackened.

4. Pour the chicken broth into a pan and add the roasted veggies, the spices, and the cilantro. Blend it all thoroughly using an immersion blender. (If you don't have an immersion blender, I would recommend putting the roasted veggies into your food processor or blender and adding just a bit of broth and then blending it all together until it's pretty smooth. Then mix it in with the chicken stock.)

5. Add the browned pork to the sauce and simmer over low heat until the pork is very tender, approximately 3 hours.

6. Serve with rice and corn tortillas.

The verdict? It definitely went over better than the pesto. Everyone ate up every bit of their servings and some had seconds, including D's grandma.

The dish barely has any heat but it has lots of good flavor. I like spicy food, so next time I will definitely leave the seeds in at least one of the jalepenos to help remedy this. If you aren't into spicy food, don't be scared of the peppers, just make sure you get the jalepeno seeds thrown away, because the seeds are the spicy part.

Sorry, there are no pictures of the finished dish because I was too nervous about being a hostess to whip out the camera. Having D's mom and grandma over is still a bit nerve wracking, even though I've known them both for years. Why is that?
Posted by Rachel at 6:07 AM