I know, I know, my titles aren't usually this bossy, but I can't help myself today because that's how much I love this recipe.

I don't know when my love of Indian food snuck up on me. For many, many years, the mere smell of curry terrified me, despite my parents' best attempts to convince me of its deliciousness. I think I eventually got shamed into eating it when my more worldly friends starting suggesting meet ups at Indian restaurants and I was too embarrassed to admit I didn't like Indian food. Which is just as well, because it turns out I do.

This recipe is one of my favorite things I have made in a while. It's so simple and yet so satisfying. I actually made a double batch of the sauce so I can make it again this week. Even if you aren't sold on Indian food, I would recommend this to you. It isn't even hot spicy, if that's a deal breaker for you, although it has plenty of good flavor. 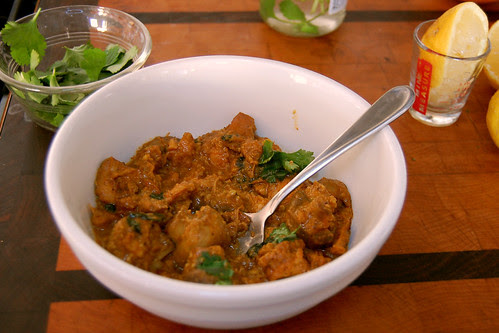 Chicken in Cashew Nut Sauce (from this book, serves 4)

Toss in the food processor and pulse until you have a paste:
1 large onion, roughly chopped
1 clove garlic, crushed
1 tbsp tomato paste
1/2 cup cashew nuts
1 1/2 tsp garam masala (if you can't get this locally, this link explains how to make your own)
1 tsp chili powder
1 tbsp lemon juice
1 tbsp plain yogurt (I used the full fat Greek style yogurt)

Toss in and saute for a few minutes over medium heat, until lightly browned:
1 lb of cubed chicken (recipe calls for breasts, I used thighs, and I think you could sub any kind of meat, really)

Remove the meat from the pan with a slotted spoon (leaving the oil behind) and transfer it to your slow cooker. Add to the pan:
6 oz white button mushrooms, chopped in half
Spice/nut paste you prepared in the first step

Gently saute for a few minutes, stirring constantly. Transfer to the slow cooker.

Cover and cook on high for 3 - 4 hours, stirring halfway through. At the end, the chicken should be tender and the sauce should be fairly thick. Top it off with some chopped cilantro. Serve over rice, or with naan, or both.

The recipe calls for the slow cooker, as I've described above, but I think it would be really easy to do this in a pot on the stove, with very low heat, or even in the oven. Generally, I find recipes that take 3 - 4 hours in the slow cooker annoying because I work for 8 hours a day and I am not around to be stirring things, but this is perfect for an almost hands off weekend supper.

Whatever you do, make this. Don't be intimidated by all the ingredients. It comes together very quickly and it makes the house smell heavenly.
Posted by Rachel at 5:42 AM