Everyone has their birthday pie. I always pick lemon meringue and D always picks key lime. The first year I ever made a key lime pie for him I put meringue on it and let me just tell you that there are two camps of people - those who put meringue on key lime pie and those that believe nothing except whipped cream is appropriate. It was embarrassing.

I've since reformed but it's taken me years to track down just the right recipe. I tested out fancy recipes that have you make lime curd and strain it through a chinois. I've tested regular crusts and graham cracker crusts and some variations on each. The final winner uses the easiest filling (I swear - homemade curd doesn't taste any better than the tried and true version with sweetened condensed milk) and a crust that's a little out of the ordinary, combining gingersnaps and pecans. 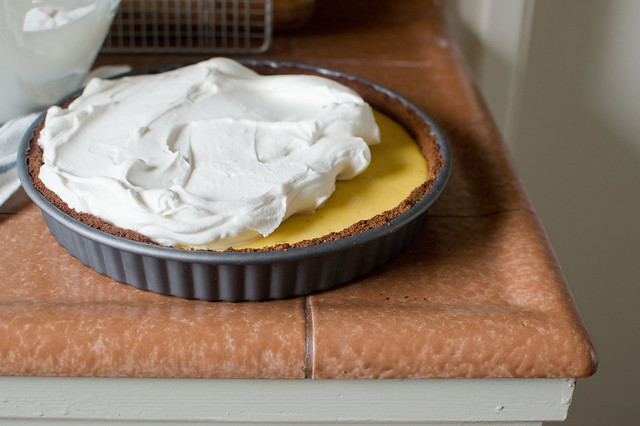 For the crust:
2 cups gingersnap cookie crumbs (about 9 oz)
1 cup pecans (about 3.5 oz)
1/4 cup packed brown sugar
2 tablespoons chopped crystallized ginger (you can skip if you don't have it)
1/4 cup unsalted butter, melted

For the topping:
1 - 1.5 cups chilled heavy cream (depending on how thick you want it)
1 - 2 tablespoons sugar

Make crust:
Preheat oven to 350F. Grind cookies, pecans, brown sugar and ginger in a food processor until nuts are finely ground. Add butter and process to blend. Transfer mixture to a 9" tart pan with removable bottom and use your fingers to press filling onto the bottom and around the sides of the pan as evenly as possible. Bake crust 10 minutes, until just set.

Make filling:
Whisk together condensed milk and yolks in a bowl  until combined well. Add juice and zest and whisk until combined well. Pour filling into crust and bake in middle of oven 15 minutes (filling will set as it cools). Cool pie completely then chill, covered, at least 8 hours.

Make topping:
Beat cream and sugar with an electric mixer until it just holds stiff peaks. Spread cream on top of chilled tart with a spatula and smooth it out. Cover and chill until serving, up to several hours ahead. One cup of whipped cream gives you a nice layer on top but I like to go for the full 1.5 cups which makes the whipped cream layer nearly as thick as the filling layer. This is a personal preference, for sure.

Modification for 10" pan: The original recipe calls for a 9" tart pan but I don't have one. I use a 10" tart pan instead. There is plenty of crust for a 10" pan but the filling ends up being spread thin. Sometimes I just leave it thin and add extra whipped cream but I usually double the filling. The doubled recipe won't all fit in the tart pan, so I pour the little bit of extra into a ramekin and bake it alongside the pie for a quick treat. I use a full 1.5 cups of whipping cream for a thick layer on the 10" tart pan, but you could probably get away with using less.

Most recipes tell you to whip the cream immediately before serving, but who wants to be in the kitchen right before dessert? I generally whip the cream and spread a thick layer on the tart in the morning and then pop it back in the fridge. I haven't had any issues with this. That last picture was taken with a leftover slice of pie two days later and the whipped cream is a little beat up but still delicious. 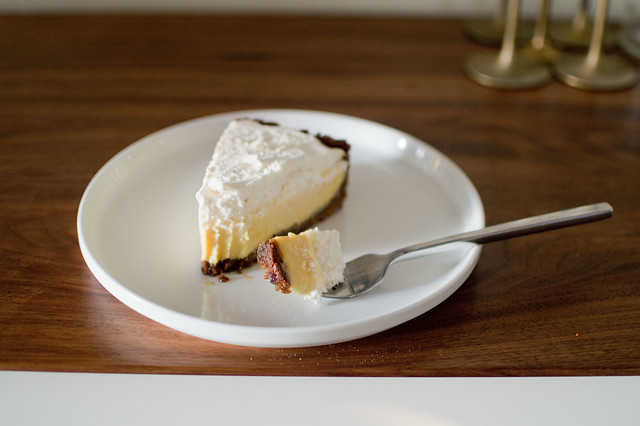