When we went to the Border Grill holiday cooking demonstration last year I fell in love with their cranhattan. It's a good strong cocktail and it makes the most of festive cranberries, which I'm a sucker for at this time of year. The prep is going to look a little daunting, because you have to make two components before you even start mixing the drink. Luckily, you can make them ahead of time (this weekend, maybe?) and have them on hand for any holiday guests that drop by. 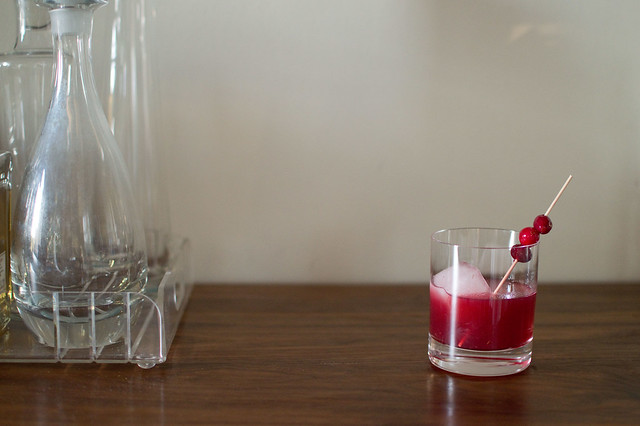 {cranhattan}
So, a Manhattan is usually bourbon and vermouth with some bitters. The cranhattan recipe calls for tequila and brandy but I wanted to stick with bourbon so that's what I did. It's great both ways, so you can use whatever you have on hand. I've modified the recipe slightly because I tested it out a few times and decided that I like it less sweet. This is a strong drink. If you normally prefer light, sweet cocktails, you will hate this, there's no way around it. I'd rather you know that now than after you've wasted several cups of cranberries.

For some reason this doesn't really hold up as a pitcher cocktail, which is the one downfall. It's best mixed one or two at a time and served over a couple ice cubes.

Mix everything but the cranberries in a cocktail shaker. Shake thoroughly and strain into a chilled glass. Garnish with drunken cranberries.

Cranberry puree (makes 3 cups - enough for 24 cocktails, can be frozen in an ice cube tray for later)

Combine everything in a heavy-bottomed saucepan over medium heat. Cook until cranberries break open and begin to break down, about 8 to 10 minutes. Puree (in a blender or with an immersion blender), strain through a doubled up piece of cheesecloth and chill until ready to use.

* The original recipe makes 6 cups of cranberry puree but that is a TON of it. I cut the recipe in half and froze the leftovers in this ice cube tray that holds 1 oz per cube. *

Combine cranberries, sugar, water and 1/4 cup of the alcohol in a heavy bottomed saucepan over medium-high heat. Cook just until cranberries start to pop and split open, 5 - 8 minutes, swirling the pan to stir and watching carefully. Once a few of the berries split open the rest will follow, so be ready to remove from heat immediately. Allow to cool to room temperature. The berries should remain intact with a single split that allows them to soak up the liquid. Once cooled, add the remaining 1/4 cup alcohol and refrigerate 1 - 2 days before using.

* I poured the berries and liqueur into a jar and put it in the fridge, shaking it gently a couple times a day - you can make it several days ahead of time and it will hold up perfectly fine. *

I know I've been heavy on the bourbon cocktails the last few months. I'm always partial to it but it's ramped up because we've been getting the Bulleit bourbon in the gigantic bottle from Costco. It's a crazy good deal.