D bought me this beautiful little vase, also from Heath.* I wanted something super simple for it. A few sprigs of lavender would have been lovely, but I think I may have killed my lavender.**  But three little crespedia did the trick nicely. 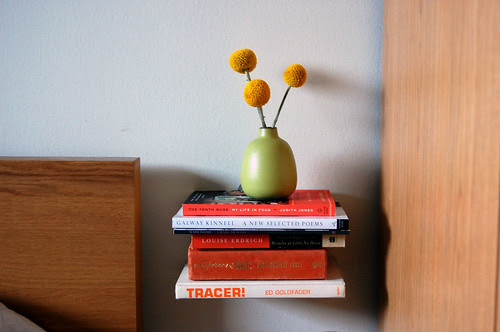 {crespedia, books}
I didn't even put any water in the vase. I have my fingers crossed that they'll just dry out and stay like that, because we're leaving for a couple weeks and I'd love to have them waiting for me when I return. I think they're a pretty good candidate for dried flowers, although you're probably supposed to do something more proactive, like hang them upside down for a few weeks. I'm more of the finger crossing type, really. 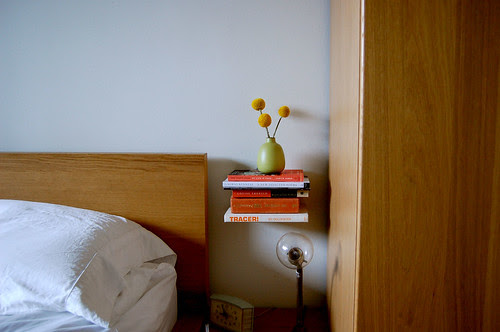 {crespedia, bedside}
Oh, did you catch that? Yes, we're leaving for a couple weeks. Crazy. As you read this I am either ...

None of these are my most favorite activities (D and I have a really terrible track record when it comes to international airport security and we've both been interrogated multiple times and we've had our luggage confiscated once, despite having nothing in it but clothes), but I'm very excited to land. I'll be on vacation for two weeks (!) and I won't be posting, but you might see me pop in here from time to time with pictures, if the promised wireless internet connection in our rented apartment actually exists. You really never know.

* I swear I'm not paid by them in any way - it just happened to be a Heath heavy gifting year.
**  How can you even tell? Maybe it's just dormant? I am definitely not a plant guru.
Posted by Rachel at 5:37 AM