I had lofty dessert visions for the baby shower. It had a beach barbecue theme, so I wanted to try a riff on s'mores, which are one of my favorite summer treats.

I considered - learning how to temper chocolate, making chocolate ganache, mastering homemade graham crackers, incorporating digestive biscuits instead of graham crackers, subbing fancy chocolate for the standard Hershey's for improved flavor,  keeping the standard Hershey's for the sake of nostalgia, finding a recipe for homemade marshmallow fluff, making a boiled icing that would be reminiscent of marshmallows without being too obvious, purchasing a kitchen torch for artistic toasting of either icing or marshmallows ...

And then suddenly it was Friday and I was out of time and slightly embarrassed by how much mental energy I'd given to the s'mores issue.

cookies, which have a nice biscuit base covered in chocolate + marshmallows, toasted.  I did make the marshmallows, so that I could cut them into heart shapes. 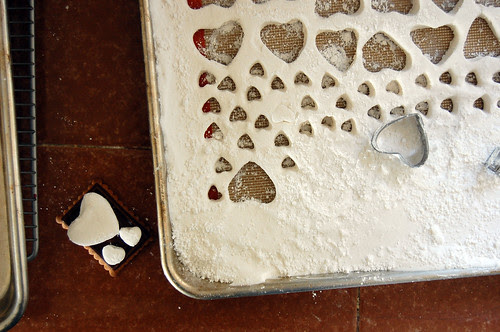 {indoor s'mores, prep}
If making marshmallows sounds unbearably unnecessary to you, I think you could cut regular marshmallows in half  to make them thinner and then cut them with a cookie cutter. But really, once you get your hands on Deb's recipe for fluffy marshmallows you'll realize that making them is faster than running out to the store to buy them. I put them in a larger pan, so that they were a bit thinner and easier to cut into shapes.

After cutting, I arranged a few marshmallows on top of each cookie, then popped them in the broiler briefly (watch the entire time - do not step away from the broiler!) and pulled them out once they were golden. After they cool, they're easily transportable and the whole process takes very little time. {indoor s'mores, toasted}
I think these fall into the better in my head category. Don't get me wrong - they're perfectly tasty and fairly cute and certainly time efficient. But the hearts puff up enough that you can't really tell what they are and the chocolate melts a bit more than you'd like because the broiler is so darn hot. I'm thinking this actually is one of those rare occasions where a kitchen torch would really have come in handy, but I can't quite justify purchasing something I would only use once or twice a year.

I love s'mores so much that I'll probably keep trying to find a dessert that does them justice. In the meantime, I have lots of leftover marshmallow scraps to nibble on and add to hot cocoa, and that is good enough for me.
Posted by Rachel at 5:02 AM