About 6 months ago, we ran out of paper towels. Then for 2 full months we kept forgetting to buy them (yes, we are that forgetful and that lazy). Once we hit the 3 month mark, we realized we didn't really need the paper towels. We do have cleaning rags, after all, and they serve pretty much the same purpose. I'd say the lack of paper towels is now 50% earth friendly choice and 50% residual laziness. We will probably eventually buy some paper towels, but I don't think we'll be using them as much as we used to.

All this is a very long lead up to say that last week we ran out of paper napkins. Luckily I had a thrifted tablecloth lying around and I quickly began repurposing it. It coincided with my first attempt at embroidery. I got the Stitch It kit last year, and now I'm sad I didn't try it out earlier. She walks you through the stitches and it's very easy to pick up.

These aren't a pattern, though. I just took a pencil and lightly wrote on these, and then embroidered over my lines. 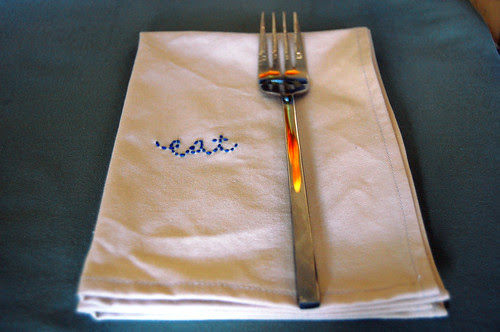 {everyday napkins}
I tried a couple of colors. I think I'd like a rainbow effect for the table. 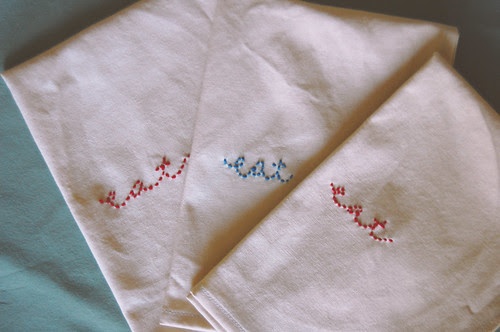 {napkin trio}
Ever so much more refined than paper napkins.

I have to confess something though...I don't think I'll be making napkins again. This is a very, very thrifty project ($2 tablecloth + $2 worth of thread = 16 reusable napkins) but it takes a LOT of time. We're talking hours of pressing and hemming, at least for me, for a product that looks slightly less professional than what you would get at Cost Plus. Next time I think I'll find a bulk set of napkins and just do the embroidery, which is the fun part.

Did you hear that? I just encouraged you to buy something instead of make it. See, I'm not completely insane.
Posted by Rachel at 5:07 AM