We eat a lot of naan. Naan with lentils, naan pizza, naan with dip.

I should admit right away that I rarely make naan. We rely on the frozen naan from TJs, and it's amazing.

But every once in a while, I make naan for fun. It's a process, slightly tinged with danger, and I like it. 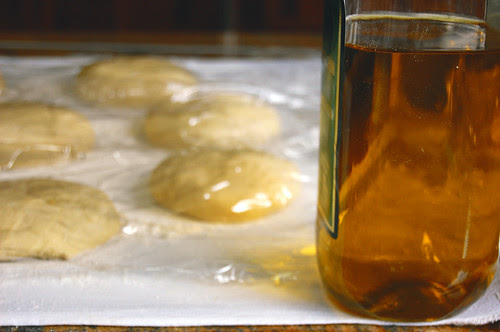 I use Madhur Jaffrey's recipe from World Vegetarian. Mix up your dough as directed, and divide it up into 6 - 8 balls. Let them rest for a bit. In the meantime, pick out the largest cast iron pan you have and put it on the stove. 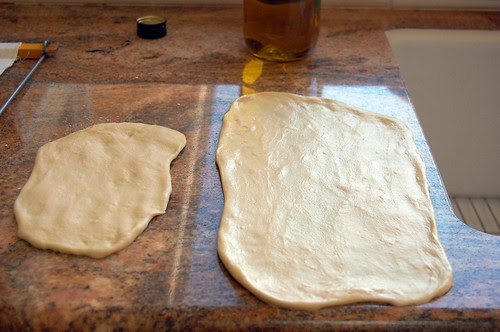 Gently stretch the dough into naan-ish shapes. As you can tell, mine vary widely. I don't worry about it. Coat your hands with olive oil or butter during this process to avoid becoming a sticky mess.

This is the dangerous part. Heat your cast iron pan up and also have your oven open with the broiler going - set up a rack about 6 inches below the broiler. Shoo small children and animals out of the kitchen. Pick up a shaped naan and toss it on the pan on the stove. Allow it to cook for a minute or two. It will puff up beautifully.

Pull your oven mitts on and transfer the entire pan to the oven. The top should just start to brown (I overcooked mine this last time and they were tougher than I like). Pull the pan out, set it back on the stove, use a spatula to pull the cooked naan off and then slap an uncooked naan on. Repeat. Try not to run into anyone or trip over anything while you are rushing around the kitchen carrying a flaming hot, incredibly heavy pan. 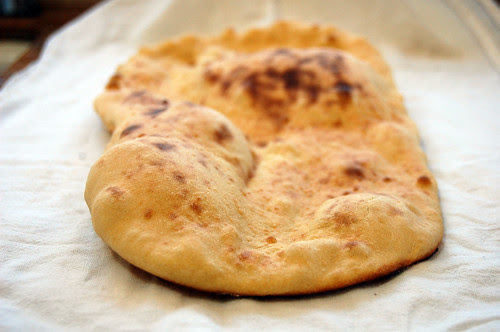 This becomes a fun little dance. Have a dishtowel waiting on the counter next to the stove, as a landing place for your finished naan. You can re-heat them in the oven right before eating.

Maybe next time I'll make a double batch and undercook them slightly so I can freeze them and get us off our TJ's naan habit. We'll see.

In a different bowl, combine sugar and yogurt with electric mixer. Beat in milk and water, then gradually beat in 2 cups of the dry ingredients. When thoroughly mixed in, the batter will look a bit pasty. Beat in egg and then slowly add approximately 2 cups of additional flour. The batter should be thick and elastic.

Oil your hands. Scrape the dough out onto a floured surface and knead in about one more cup of flour. You can add more if necessary.

The dough will be slightly sticky. Divide into 6 - 8 balls and space evenly on baking sheet. Oil your hands again and flatten each ball. Cover with plastic wrap and set aside for at least 30 minutes, or refrigerate for up to 48 hours before making the bread.

Place cast iron skillet on stove over medium-high heat. Light your broiler and place the tray about six inches from the heat.

Working on the floured counter, place one dough circle on flour, dip hands in melted butter (or oil), and press down on / push dough to make a large tear shape, about 5 inches at the narrow end and 9 at the wide end. Continue stretching until the naan is about 7 by 12 inches. (I wasn't terribly fussy about this, as you can tell.)

Slap the naan on the hot skillet. Cook for 30 seconds, move around a bit so it browns evenly, and cook another 45 seconds.

Brush with a little butter (or oil) and place pan under broiler for one minute, until it gets a few reddish spots.

Ms. Jaffrey recommends sprinkling the top of your naan with sesame seeds before cooking. Personally, I'm not a big sesame seed person, so I left them out, even though I'm sure it's delicious that way.

This is definitely not a recipe you break out on a weeknight unless you come home from work much more motivated than I do. Save it for a weekend and you'll thank me.