February was a little rough for me. I was pretty emotional about my dad, Dustin had an insanely heavy work schedule so I was solo most nights, and it just didn't seem worth it to cook all those weeknight meals. I ended up skipping two of the lentil dishes I had planned (weeks 3 and 4), but that's fine because the lentils will keep. I stopped even marking up my planning page after week 2 because I was cooking on different days and just generally doing whatever was most convenient, rather than sticking strictly to the schedule. But it was still nice to have it laid out and know what my options were.

I'm sticking with the monthly system again for March (post up tomorrow). I think it's helping a lot because we hardly ate out at all in February (although that might be due to the whole D = working, me = sad thing I mentioned). I did go over on our grocery budget this month by quite a bit, partly because we entertained a few times and I made a Costco trip to restock some critical items (enormous bag of chocolate chips, bourbon) and partly because I might have been treating myself a bit too much (flowers, wine, good cheese, nice beer). But hey, you do what you need to do, right? I'm going to buckle down again this month and make sure to hit our target. 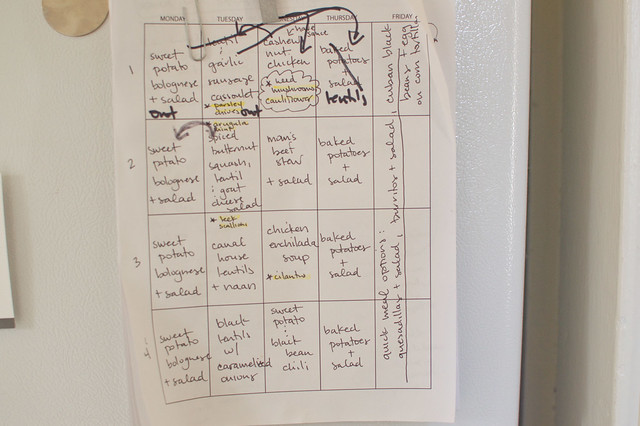 New recipes I tried in February:

Lentil and garlic sausage cassoulet - I thought this was pretty tasty but so much work for a relatively simple dish! You make the broth, skim, then cook the lentils, then you're supposed to bake everything in a casserole dish. I would only make this again if I were going to streamline it a lot, or I would have to move it to weekend only rotation.

Spiced butternut squash, lentil and goat cheese salad - This was great, and it came together super fast because I did cooked the lentils and roasted the squash on Sunday afternoon while I was doing stuff around the house.