So, this is the part I've sort of been dreading telling you about.

We looked at so many catering options. The food was very important to us. We had hoped that a restaurant wedding might be cheaper, but our group size was awkward – too big for any of the regular group rooms and not quite big enough to justify the cost of a Saturday night buy out. It came down to a close race between my favorite local barbecue place and our beloved Border Grill in truck form. We did a tasting at the truck and it was amazing. They are so responsive and pleasant to work with and we made the call easily. Throughout all the sucky parts of wedding planning, we kept reminding ourselves of how excited we were about the food choice. It felt like it was us, something from our lives in LA that we would be able to share with our families and friends. And it was affordable! 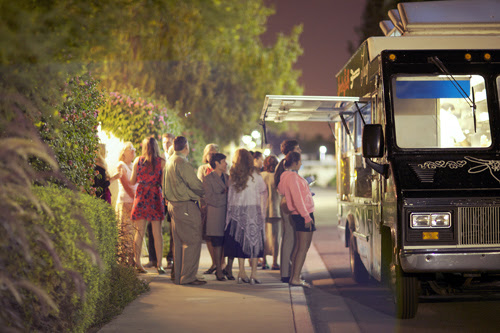 {BG truck - photo by melissa of happy confetti photography}
And this is the sad part, the part of our wedding that still kills me. The BG truck didn’t come through for us. It was just a perfect storm - they had a couple of staffing issues on a single day and it ended up making them late and short staffed. As in, half the staff we were supposed to have. The food was amazing, but it was painfully slow. People were waiting for well over one hour once they decided to brave the line. My dad didn’t even eat until close to 10 pm. As we walked through the reception, greeting people and smiling and chatting, I kept seeing all those people waiting for food and it was incredibly stressful. We pushed the schedule back and then eventually ended up just doing the toasts and first dance while people were still waiting in line for food, because it became clear that it wasn’t going to get any better.
This was hard – I love the Border Grill and I’d made it clear in all our emails that my top priority was to have really great tasting food, plenty of it, and quickly. I paid for 160 people instead of the 140 + vendors that we actually expected, just to be absolutely sure that we would be fully staffed and not run out of food. We went over time estimates of how long it would take for orders to get out and D designed check off menus specifically to make the food service run more smoothly. 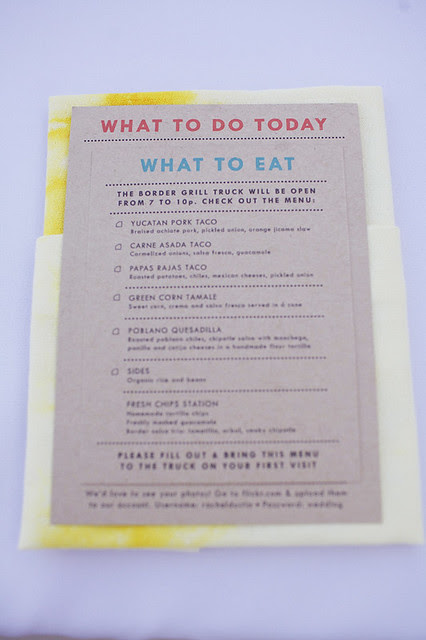 {check off menu! - photo by melissa of happy confetti photography}
I didn’t sleep the night of the wedding and it was mostly because of the food situation. Extreme? Maybe, but for me, food is a huge part of every gathering. As a hostess, I always worry about having enough food and usually end up with twice as much as I need. Providing an ample and timely meal is a sign of respect and appreciation for people that have traveled to be with you. I was ready for things to go wrong at the wedding and I was ready to shrug them off. But this was something I couldn’t let go of and there wasn’t any way to fix it. I’m still upset by it when I think about it, although I no longer feel like I’m going to start crying if I talk about it.
I thought for a long time about posting this, because the BG staff have always been wonderful to us and they were genuinely dismayed with the staffing situation at our wedding. I don’t want to slam them. Becca used them for her wedding and it was wonderful. I think they got hit with more staffing issues than they could handle and this wouldn’t normally happen. But I can’t do my wedding over again and I can’t apologize adequately to all the guests who had to wait in line for food instead of dancing. And this was a huge part of my wedding. So there it is. A big thing that went wrong that I probably won’t ever be over entirely.
I should note that our guests were almost universally awesome about the situation. They used the line as a social area and took early advantage of the cookie buffet and reassured me that they were fine. But I’ll just say it – I would not have been fine waiting for hours for food when I expected to have it at 7 pm. So either our guests are more patient (or less prone to low blood sugar) than I, or they are just incredibly nice. I’m going with the later.

Oh, and a side note - Our wedding had all disposable plates and glassware. Yes, this killed me a little, both aesthetically and environmentally. I probably would have been willing to suck up the cost of the rentals, but I didn't want to have to handle the logistics. When you rent plates, everything has to get rinsed off and then re-packed at the end of the night. This would have meant hiring a lot more staff, at which point it would have made sense to consider just hiring a more expensive caterer and renting plates directly from them. It ended up being a spiral of costs and decisions and we went the easy route – figuring out how many plates and cups we needed (the truck supplied the food trays for their food) and buying them (and later returning the unused ones). AND IT WAS FINE.
Posted by Rachel at 5:49 AM