This year I decided to play with crochet thread for the Valentine's Day cards. I just drew little lines with plain Elmer's glue and then stuck the thread right on. It looks like the glue will be really obvious but it flattens out a bit as it dries and it's fine. The balloons are just red felt hearts. 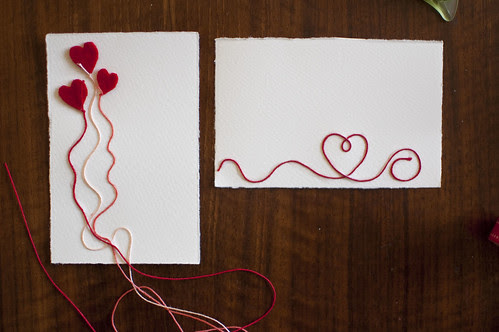 {valentine's day card 2011}
I was searching through my archives to see if I've adequately explained my Valentine's Day thing (obsessed, platonically) and I think I've covered it. In 2009 I gave it a whole week, complete with garlands, cookies, and cards. Oh, and I participated in Amanda's swap and Lauren and I became instant internet friends.

Last year Circe got a new bandanna and I sent goodies to Lily and became obsessed with her work (and eventually purchased two paintings that I treasure) and we became friends and I got goodies from cevd, who was already a friend. I can't find any record of my cards, but I definitely made brownies. Shaped like hearts.

In summary, Valentine's Day is good for friends.

Also, I haven't decided what to bake yet. But I still have several days for that.
Posted by Rachel at 5:20 AM