I always get the itch to clean out and organize right before the new year. An ill timed episode of Hoarders* shifted me into high gear last Monday. I tore everything out of our storage spaces around the apartment and dumped it on the floor. Then I sat in the middle of the mess and started sorting and boxing. Several large mugs of tea and a couple of TV breaks later, we were in much better shape. I only cried once.

And I thought of a new way to store my burgeoning ribbon supply! Which involved a trip to Ikea that was less than pleasant because apparently everyone else was on the hunt for organizational supplies as well. But we survived. We did not break up and we are still speaking to each other and we managed to only buy the items on our list and we got 50 cent hot dogs for lunch to celebrate. That's basically the definition of Ikea success. 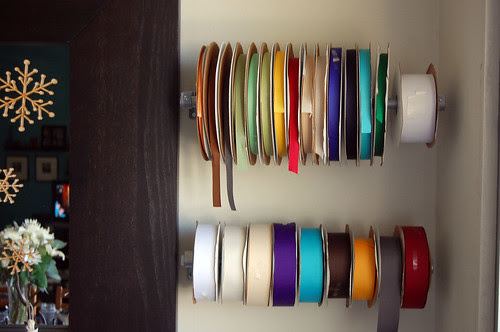 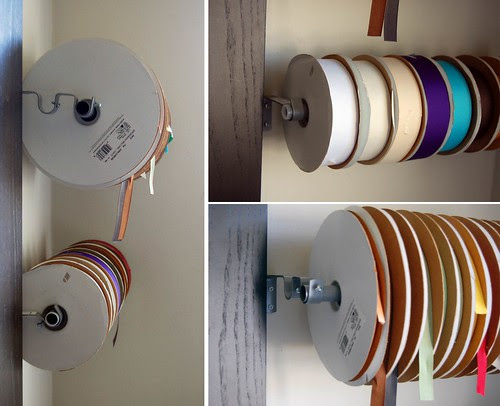 I order my ribbon from the manufacturer in bulk, so the spools are enormous and a bit difficult to accommodate. If you just have normal size spools, you could use a paper towel rod rather than a curtain rod, which should eliminate the need to use the Dremel.

*I have now officially been banned from watching Hoarders, ever again. I think I'm equal parts sad and relieved.
Posted by Rachel at 5:16 AM