Do you remember this tutorial for the knotted headband? I was thinking about it a few weeks ago and decided I wanted to make some mini versions. Because everything is cuter in miniature.

But use crochet thread instead of strips of fabric. One length of thread should be measured by wrapping it around your head (add a bit extra if you are going to want to tie it) the other piece of thread (the one you'll be using to make the knots around the first piece) needs to be approximately six times as long as the first. Yes, that is very long.

You can vary the width of the finished piece by using more than one long thread (just bundle them together and make knots as if you have a single thread). For visual interest, I made three knotted strips for my headband, in three different widths. I secured them with a bit of elastic at the bottom. I've been wearing it non stop for the last two weeks.

{front & back}
There are a few up in the shop, for those of you who prefer to outsource (and because they are so compact, I'm offering free shipping!). I'm not sure if these will end up being in the shop all the time. To be honest, as much as I love making them, they are very time consuming and my poor hands don't love making all those knots. The first day I made these I went overboard and woke up the next day with swollen finger joints. Take it easy, if you want to make these. 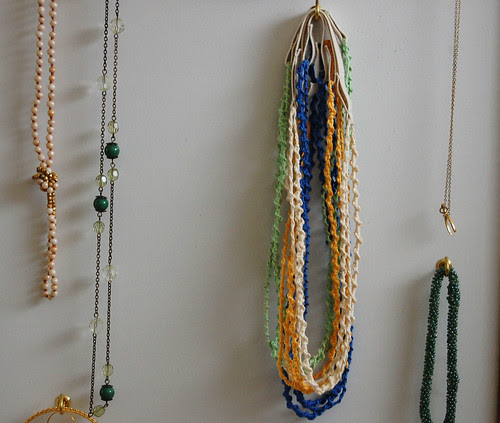 {pretty jumble}
Now if I were a camp counselor, I would totally put some kids to work and crank these out nonstop. Kids will do just about any manual labor for a couple pieces of candy. It doesn't even have to be particularly good candy. I once spent an entire afternoon stuffing envelopes at camp and I was paid with 5 Jolly Ranchers and I was pretty sure I'd gotten a great deal. Ah, youth.


*This tutorial is provided for personal use only. Please do not sell this tutorial or create items for re-sale using this tutorial. Tutorial may be re-published only with my permission.
Posted by Rachel at 5:27 AM