Bandido Group campground is just 26 miles above La Cañada Flintridge, making it a pretty easy 1.5 hour drive from LA. We managed to get a rare two night trip in by leaving on Friday evening after work, hoping that we could juuuust make it while it was still light out, but naturally we didn't get there until 9 pm. Luckily we're pretty good at setting up our tent in the dark, although the first spot we chose was right on top of a giant anthill and I'm really, really grateful we noticed them just before we got started. 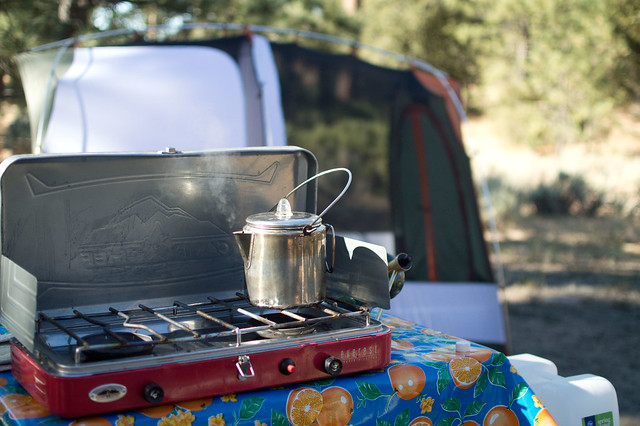 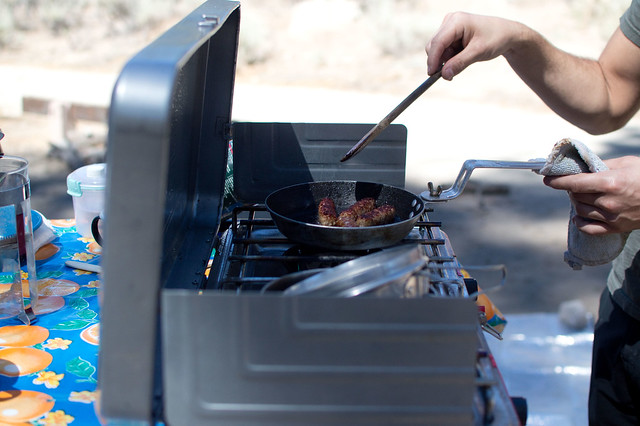 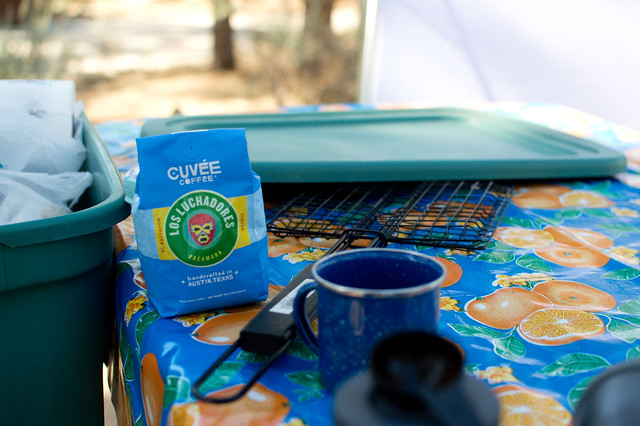 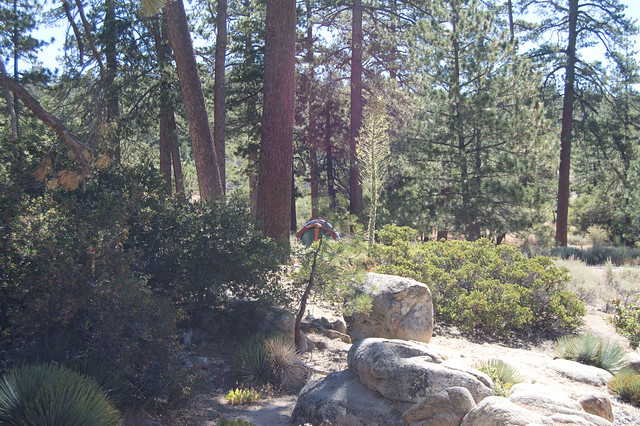 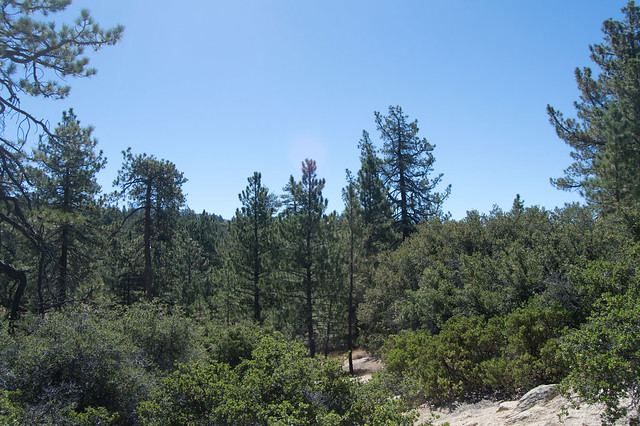 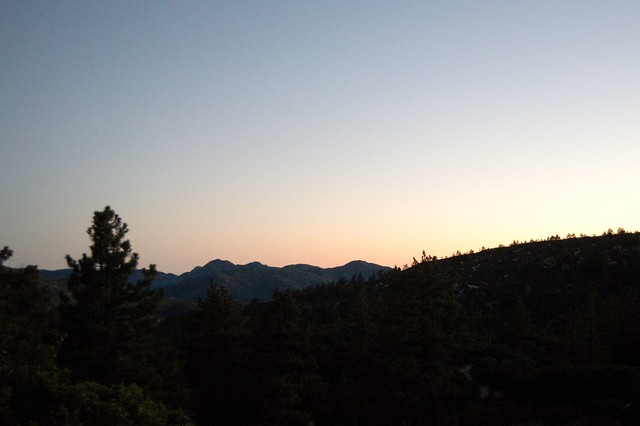 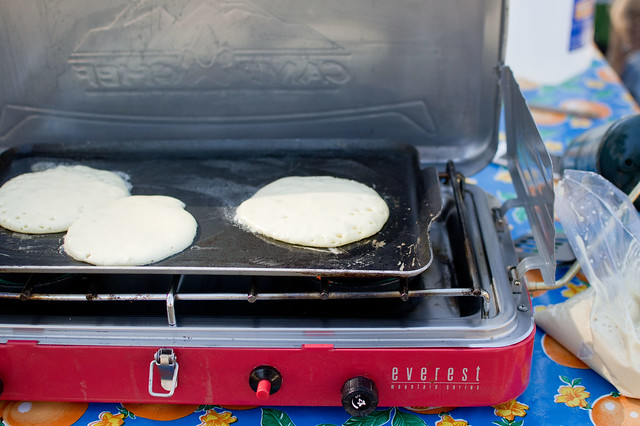 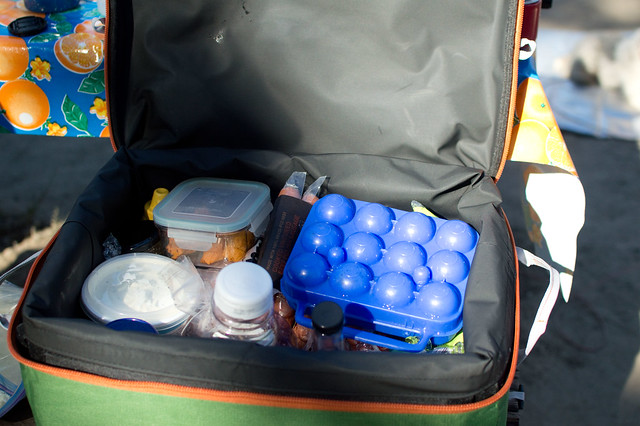 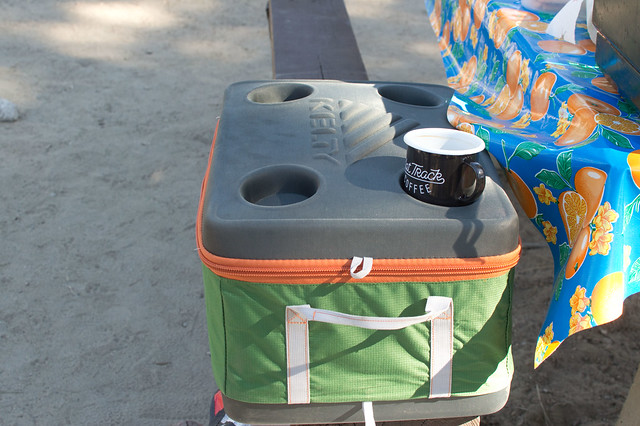 On Saturday we visited the Chilao visitor center, a few miles down the road. It's a really nice station and the rangers were sweet and enthusiastic and recommended some good hikes just a couple miles from our campground. We ended up going on the Burkhart trail hike, and did about 5 miles round trip. There is supposed to be a nice waterfall (Cooper Canyon Falls) but the ranger warned us that it's been too dry lately so the creek is just a trickle. It was still a nice dog friendly hike (Circe didn't agree and made us carry her the whole way anyways). We went in the early afternoon and we were definitely feeling the heat, but it just made happy hour back at the campground that much more enjoyable.

I think I've mentioned that I've been drooling over the Camp Chef stoves, and we're lucky because our friends have one and we borrowed it from them this weekend so we could test it out. The verdict? So much nicer than our old Coleman one. The flames are stronger, they adjust really nicely, and it's easier to wipe down. We aren't planning on splurging on a new stove just yet, but when we're ready we'll get this one.

Other new camping gear - we tested out our new Kelty collapsible cooler that we purchased during the REI sale and I'm happier with it than I thought I'd be. It's a soft sided cooler that collapses down for storage. It doesn't get super tiny (my main beef when I first received it), but it is much easier to store than a hard sided cooler and it holds plenty with zero leaks. We loaded it up on Friday around 6 pm, and everything was still very cold on Sunday mid-morning (although most of the ice had melted by that point). I think that's pretty good considering how hot it was outside. We did keep it covered with a space blanket (shiny side out to reflect heat away) which helps. I wasn't sure if we'd end up returning this, but we're happy with it and we'll keep it.

Bandido is in the Angeles National Forest. This group campground is nice but since there is no camp host I think cleanliness is hit or miss. We had to clean up our campsite a bit when we arrived because the previous occupants had left some trash. The bathrooms were decent (for pit toilets - soooo, not at all nice, but you know what you're getting into and at least there was plenty of toilet paper provided) for the first night but a huge group came the second night and they were the type that inexplicably strews toilet paper all over public restrooms (I will never, ever understand why people do this, but I'm very curious to see what their bathrooms look like at home). This certainly isn't the campground's fault and it's pretty par for the course with large unattended campsites.

We stayed at site 1, which can hold up to 12 occupants (but in my opinion that would be a squeeze) and costs $24/night. We had four people and it was lovely and spacious, with two fire pits, two picnic tables and enough parking for three or four cars (we only had two, so we didn't test the limits). The obvious spaces for tents are incredibly close to the fire rings, but we were able to find a couple little tent-sized nooks in the hill right above our campsite that were much more pleasant the second night.

Bandido is dog friendly, as are all the hikes in the area. Circe was in heaven galloping around the large campsite. We didn't spot any coyotes here, but we kept her close anyways because it's rattlesnake season and she hasn't had avoidance training. We didn't see any snakes, though.

Amenities: This is a pretty simple campground (which is actually nice because it meant it wasn't overrun with RVs). No running water, no electricity, zero cell service, no camp host, the aforementioned pit toilets. Fires are allowed within the fire rings, just make sure you buy firewood in La Cañada because once you start going up the hill there is nothing at all. You are allowed to pick up wood and kindling from the ground (I always check with the rangers on this in advance, because this varies and for some environments it's really important that you don't disturb anything).

Worth noting: This is bear country but there are no bear boxes provided at these sites. I checked with the ranger and she said that the bears in this area haven't yet (!) started breaking into cars, so they recommend standard bear precautions (no food left outside, nothing scented or food related in your tent, don't wash dishes too close to your campsite) but just locking your food inside your car at night. We did that and made sure to take the extra precaution of covering the coolers, bags, etc. with a blanket so they weren't visible (bears are clever and often recognize coolers, so you don't want them to see anything that makes them think FOOD). I was a little worried that we'd wake up the next morning and find our windows smashed in, but everything was fine. Note - locking food in your car is really bad news in some bear areas, notably Yosemite, where bears have learned how easy it is to break into a car. But the rangers at any given campground should know their bears, so going with their recommendations is a good bet.