Actually trying out a few new recipes this month. As the weather starts to warm up I'm looking forward to more veggie noodle bowls using the spiralizer, so I found some recipes to test. 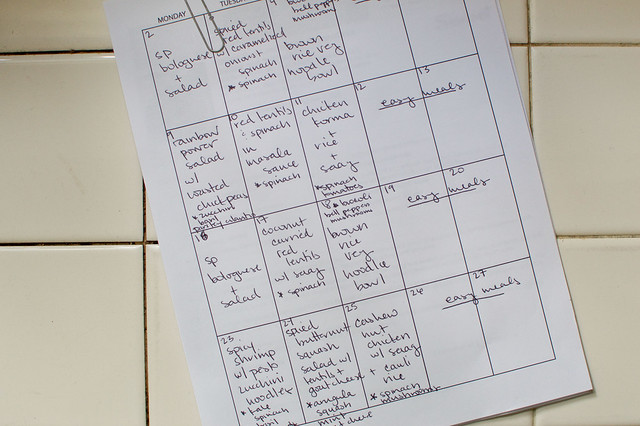 Spiced red lentils with caramelized onions and spinach - New to me, looks good.

Brown rice noodle and vegetable bowl (x2) - No recipe, I just stir fry a bunch of veggies with some ginger and garlic and the extra firm tofu from Trader Joe's (it has the best texture!) and toss with some Soyaki marinade (also from TJ's) and the cooked noodles. This month I'm excited because I found some brown rice ramen noodles at Costco and I think they'll be delicious in this.

Red lentils and spinach in masala sauce - I was looking for a new red lentil recipe and couldn't choose, so I've inadvertently created a red lentil show down this month. We'll see which recipe we like best.

Chicken korma + rice + saag - New to me recipe, recommended by a reader. I really liked the Food52 saag recipe I tried last month (also recommended by a reader - you guys are the best) but I might try the Chowhound recipe this month. It uses frozen spinach, which means you don't have to blend at the end. Worth it?

Spicy shrimp with pesto zucchini noodles - Another spiralizer recipe from Pinch of Yum. I've never tried their recipes before and I have two in one month. Fingers crossed!

Spiced butternut squash salad with lentils and goat cheese - One of my favorite recipes lately. I do toss the arugula lightly with some balsamic dressing. I still use this basic recipe and almost always have a jar of it in the fridge. Lately I've been adding a shallot in there, along with garlic and whatever herbs I have on hand.

Cashew nut chicken + saag + cauliflower rice - Using the package of sauce that I froze last time I made it. I get the cauliflower rice frozen from Trader Joe's (I'm lazy, and hate cleaning all the cauliflower bits out of the food processor) and saute it with a bit of onion and garlic.
Posted by Rachel at 6:30 AM