Still loving the monthly meal plans. I'm doing so much better with cooking on weeknights and we're barely eating out at all because we're usually well stocked with leftovers (part of that is that D has been working a lot of evenings, so there are more leftovers). I originally didn't think I'd continue this during the summer (because usually our summers end up being much less structured) but it's been so nice that I wanted to keep going. 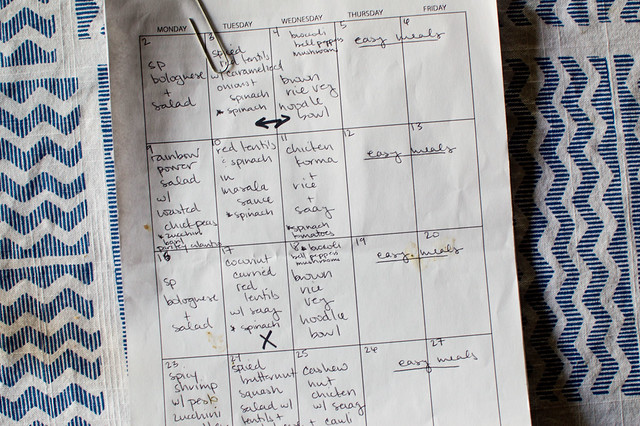 I mixed it up a lot more than usual last month! I'm barely doing anything new in June, though. so next month will be a bit boring.

New recipes from May -

Spiced red lentils with caramelized onions and spinach - This was pretty good, but in the May red lentil showdown the red lentils and spinach in masala sauce won out. That one is a definite keeper, and I'll be making it again. The masala paste is a little more effort but totally worth it. You do have to watch the spice, though. I'd start low and adjust up to taste.

Rainbow power salad with roasted chickpeas - New to me spiralizer recipe. Loved this one! The green sauce that you make for it is so flavorful that I kept snitching bites of it while I was cooking. It has an avocado base, similar to the avocado pasta sauce recipe that I love from Oh She Glows, but all the herbs take it up several levels. The veggie noodles are left raw in this recipe, so when I packed the leftovers I made sure to keep the sauce separate until I was ready to eat. The recipe says this is 2 - 4 servings but I think it's more like 2 generous servings or 3 side portions.

Chicken korma + rice + saag - New to me recipe, recommended by a reader. This was very good, but fairly similar to the cashew nut chicken I already make regularly (although I did like all the extra cilantro). I tried this saag recipe and it was a big loser. Just sooo bland. It also wasn't the one I meant to try. Apparently there are two saag recipes on Chowhound and I looked at one and then printed the wrong one. I'm so over hunting for saag recipes at this point, so I'm going to stick with the one I liked from Food52 (note - there are also multiple recipes for saag on Food52, but I've only tried this one).

Spicy shrimp with pesto zucchini noodles - Another spiralizer recipe from Pinch of Yum. I also loved this one. The pesto is amped up with spinach and kale, and it's amazing. It's also vegan, since it doesn't call for the traditional parm, and I like that it calls for almonds, since we always have almonds in the house. I will absolutely make this again. Also held up well for lunch the next day, I just put the noodles on one side of the dish and the pesto on the other and then tossed it together when it was time to eat. 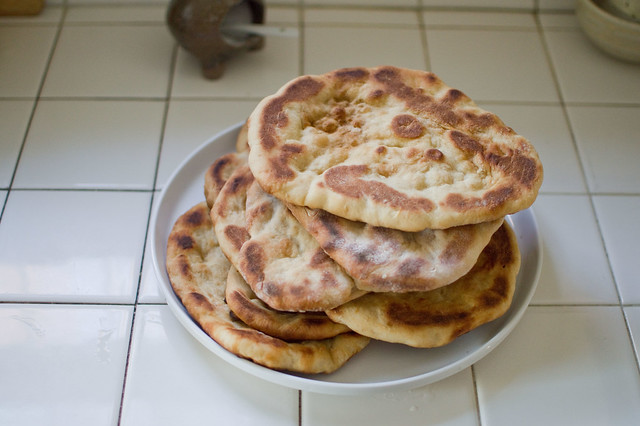 Bonus - I ended up making this naan recipe. I usually have a package of the Trader Joe's frozen naan, but I didn't realize we were out and I really wanted it. Waiting two hours for your naan to rise > braving TJ's during rush hour, right? Anyways, this was a very good recipe, and it was easy, but I still find that nothing beats that frozen stuff. We're so obsessed that if we're getting Indian take-out we'll often not order any naan and pull some out of the freezer instead. I'm not sure how they do it.