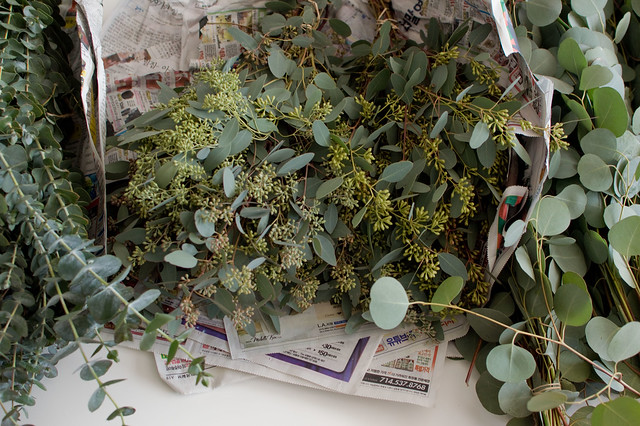 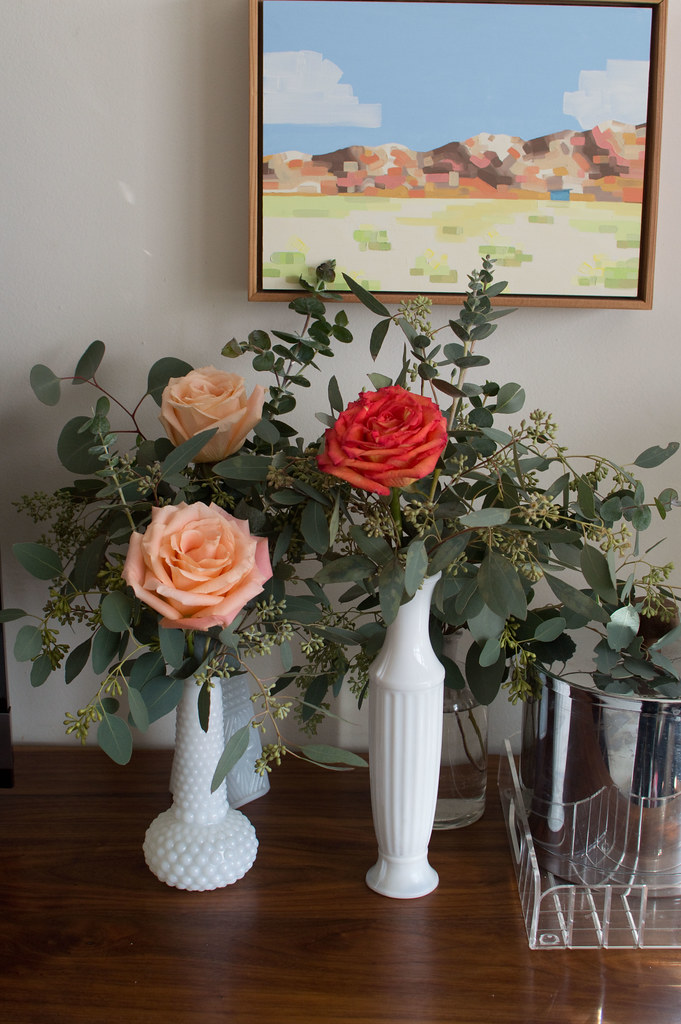 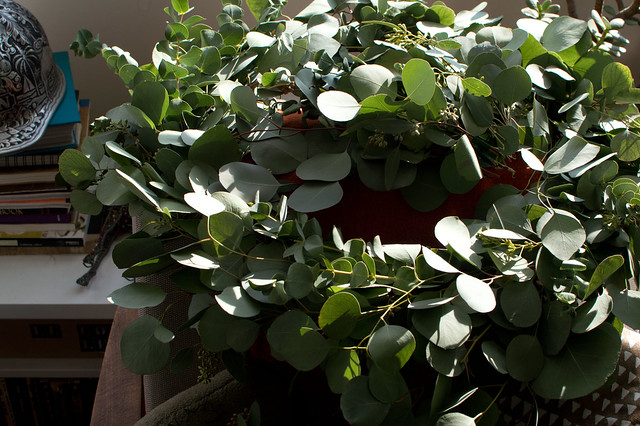 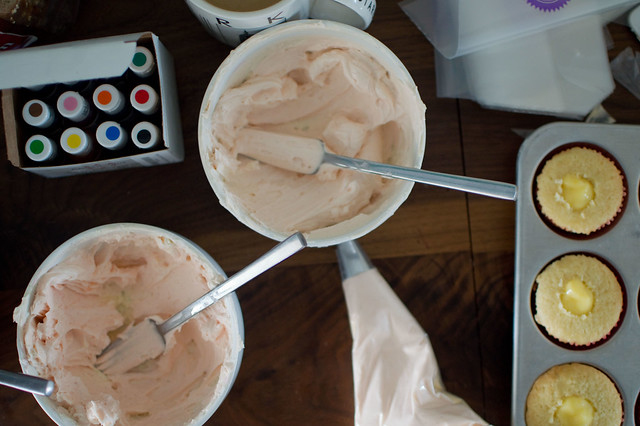 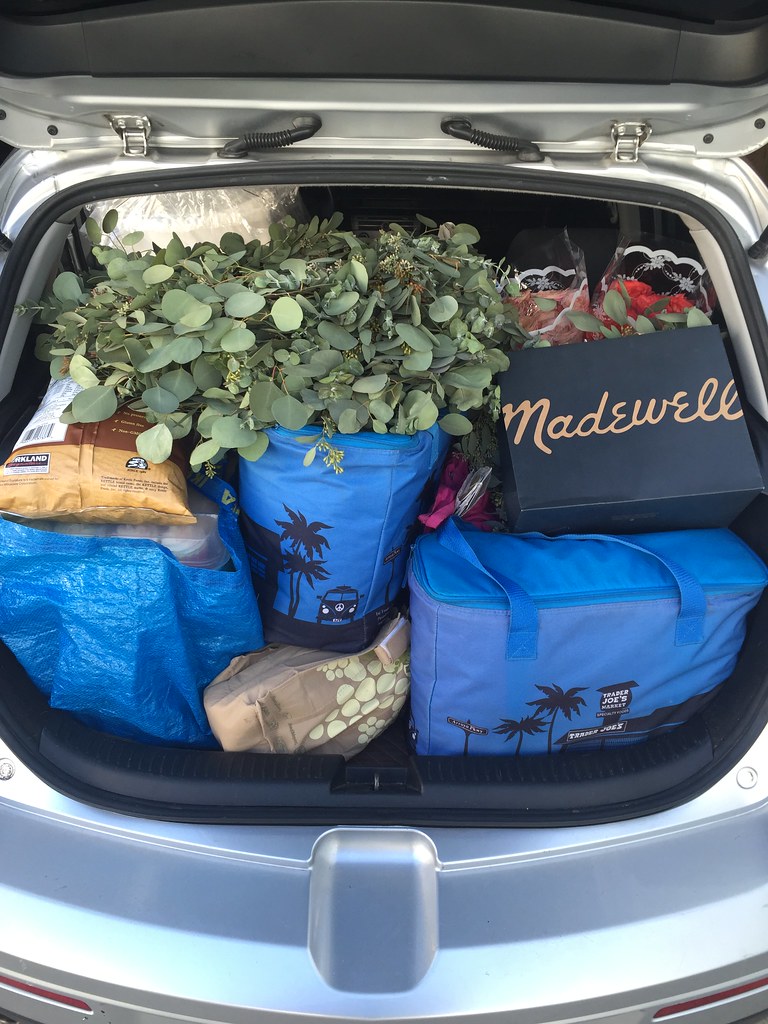 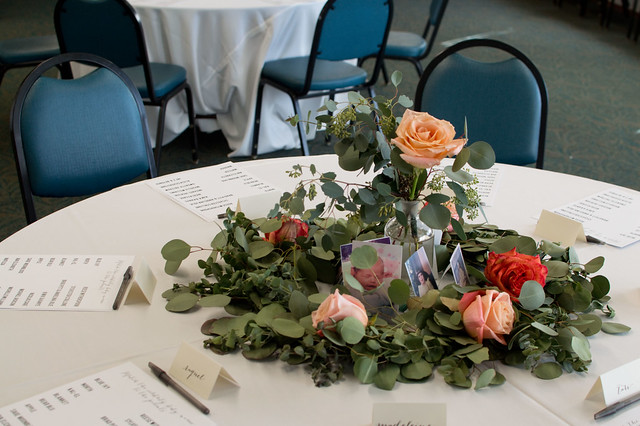 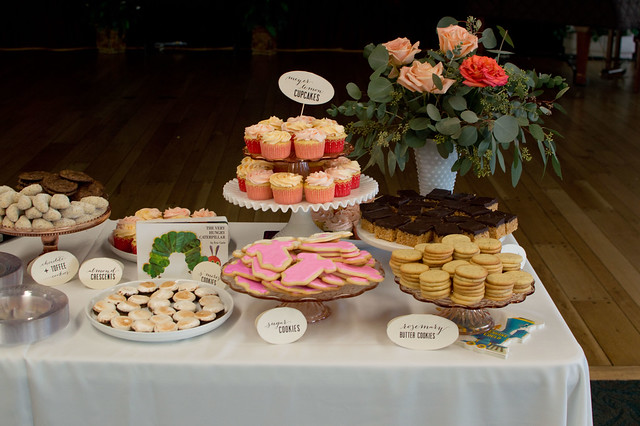 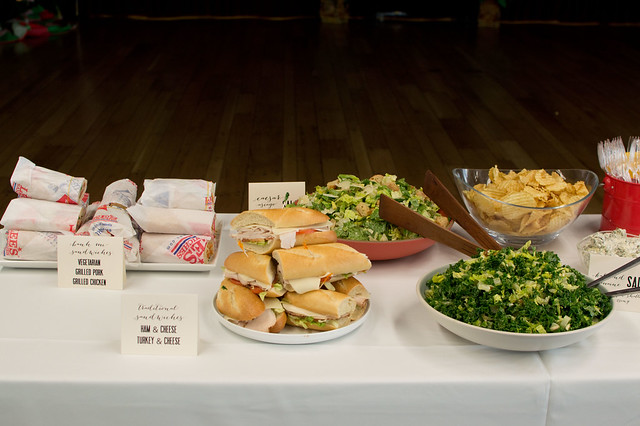 My little sister is due in March and I was so excited to throw this shower. It was fairly large - about 35 people - and incredibly joyful. I wanted to make sure that it had some personal details while still being manageable for me to host.

January can be a rough month for flowers, especially if you are looking for them the weekend AFTER the holidays. When I went to the flower mart on Friday a lot of the vendors weren't even there. Luckily I'd planned on using tons of eucalyptus, which is easy to get (and inexpensive!). I knew I wanted a few real flowers for color, but I wasn't wedded to anything in particular, which is good because all I could get was roses. So I ended up with three dozen roses (I was lucky and they had some that were reduced in price because they were fully blown, which is how I like them anyways, so they were just $4.75 per dozen) and huge bundles of three types of eucalyptus. All told, I only spent $45 on foliage.

Our seating was 60" rounds, which are kind of beasts in terms of decoration. A small arrangement can get marooned. Instead I picked up 18" wire wreath forms from Joann's and made large eucalyptus wreaths. This was definitely a move born of ignorance. I'd never made a wreath before, so I had no idea how time consuming it would be. Fun, but time consuming. I think I spent at least an hour per wreath. Luckily I only had to make five and I could watch mindless television. The wreaths looked full and gorgeous on Friday, but were definitely slightly wilted and dried by Sunday. It's fine, because eucalyptus dries well, you just lose a bit of fullness. I made a few small vase arrangements and ended up using them in the center of the wreaths. I didn't add the roses to the wreaths until they were already in place at the shower because I didn't want to deal with them getting wilted and crushed in transport. I 100% could not have done this project if I had to work a full schedule the week before the shower.

I had originally planned to do a baby photo guessing game with pictures from the guests, but realized that it was too difficult with two large families. Instead I just printed them and used them as part of the centerpieces. Each table had photos of the guests seated there plus one of Rena. It was a fun little detail, especially when you could spot the family resemblances. And yes, I did assign seats. I feel pretty strongly about this in general, but at a large party where not everyone knows each other I wanted to make sure that no one felt like the new kid in the cafeteria. I tried to leave an empty seat at each table to facilitate mingling (especially because I knew Rena would want to spend some time at each table).

I knew I couldn't do all the food myself but I also couldn't afford to fully cater it. I did a hybrid instead, making the desserts (because I love them) and two enormous salads and purchasing sandwiches from Lee's. Rena loves Lee's vegetarian bahn mi, so this was an easy choice. I think Lee's is mostly a So Cal thing, although it looks like they might have locations elsewhere? Instead of ordering party platters I just ordered a ton of sandwiches and cut them up. I got about half and half traditional European style and bahn mi. I picked up chips and dip from Costco to round the whole thing out. Don't worry - I took that photo before all the sandwiches were out - there was more food. (Per usual - I had to go boxes for the leftover food to be sent home with guests)

I underestimated the drink situation, which is a mistake I won't make again. I think we had just enough to squeak through the party, which horrified me because unless there's plenty left over I worry that people didn't have enough. I had purchased 6 bottles of sparkling lemonade, 3 bottles of wine and 3 bottles of champagne (plus copious amounts of sparkling water - we didn't run out of water) and there were just two measly glasses of champagne left at the end. I hope no one went thirsty. I probably should have done 10 bottles of lemonade and 8 bottles of alcohol. I normally use one of those drink calculators to figure out what to buy but I was frazzled and 6 seemed like a nice round number. Live and learn.

The party was too large for anyone's house but luckily D's grandmother has a clubhouse in her community that we could use for free and they had the tables and chairs, which meant I only had to rent linens. It was amazing, even if the large space was a little harder to work with than a home. And you know what makes up for green upholstered chairs and green carpet? Enormous refrigerators in the fully concealed back kitchen. I'm so lucky that we had this option because otherwise I was looking at a renting a space in a community center and it's a bit pricey and also more restrictive.

Whew. The list of logistics makes it sound much less fun than it actually was. Once the party was underway it was wonderful. Rena looked adorable (sorry - I neglected to get any of my signature no-head blog photos and I'm a bit squeamish about putting innocent people's faces front and center on the blog) and it was lovely to get the chance to catch up with everyone in the lull after the holidays.

I can't wait to meet my niece in March! Hoping I can take a little time off and make a trip up there around the due date. Fingers crossed!
Posted by Rachel at 6:04 AM