One of the deviled egg recipes for last weekend included crispy shallots, which meant I had to conquer my fear of deep frying. I've never done it because I've always been afraid that I'll catch the kitchen on fire. 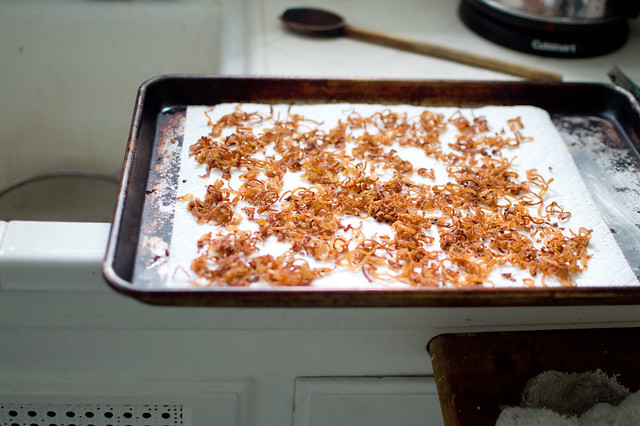 Full disclosure - there was a tiny fire. But I think I could prevent that in the future.

I used this recipe and it was perfect, except for the part about the "small saucepan," which worked great for the initial cooking, but immediately boiled over on the second round. This is when the fire occurred. Luckily I was able to turn the flame off, pour the shallots into the prepared sieve and set the oil coated saucepan down on another counter. I almost considered giving up at this point but realized that the small saucepan was giving me a tiny surface area, which is basically the last thing you want when you're trying to quickly cook something. So I poured the oil into my favorite large pan*, got the oil back up to temp, dropped the shallots in, and BOOM - magic. The final product is so delicious that it was hard not to eat all of them before I got to the party.

One other modification - the recipe tells you to use a slotted spoon to transfer the shallots after the first cooking. But since you're already going to use a mesh sieve for the second transfer, it makes more sense to use it the whole time. I just set a small mesh sieve up over a large 2 quart glass measuring cup and poured the oil right into it. It was easy to pour the oil back in the pan to get it up to the higher temperature, and a lot less messy than trying to spoon a bunch of shallots out of hot oil.

Turns out there are tons of different methods for making crispy shallots and now I'm curious about them. The one I used was essentially a double fry method - you do a long slow cook at a lower temperature and then bump up the heat for a flash fry to crisp them up. But this Ina Garten recipe does a really long, slow cooking with no flash fry at the end. I'm curious how that would work.

Small note about frying and oils - I'm obviously a frying novice, but I'd like to point out that you want to make sure you're working with an oil that has a high enough smoke point. This recipe gets you up to 350 degrees. Canola oil is usually a safe bet, but if you want to make them paleo friendly you can use refined coconut oil. It's important that it's refined! Refined coconut oil can safely get up to 350 degrees, which doesn't leave you much wiggle room so make sure you're watching the thermometer. The temp drops down as soon as you add the shallots and never gets back up to 350, so you don't need to maintain it long. The oils I looked at in Whole Foods all had labels with the smoke point on them, which made it much easier to figure out.

Save your jar, because you can pour the oil back in after the frying and use it. It'll be flavored like shallots, and it will be delicious.

* I'm still deeply obsessed with our stainless steel pans, which have held up to daily abuse for the last five years. Of course, it's been so long that the original set isn't sold anymore, which makes me sad. But if you are going to have just one amazing pan, let it be a straight sided stainless steel braising pan, about 12 inches across and 2 - 3 inches deep (it holds about 3 quarts). I had the Emeril version, which I think was just a slightly less expensive model from All-Clad. But if I had to, I'd splurge on the All-Clad high end version, or see if they have any other slightly lower end options available. This one looks most similar to what I have.
Posted by Rachel at 11:03 AM