Dustin has a problem with traditional potato salad and this has the potential to cause marital strife because I can't imagine how anyone could dislike potatoes and mayonnaise. 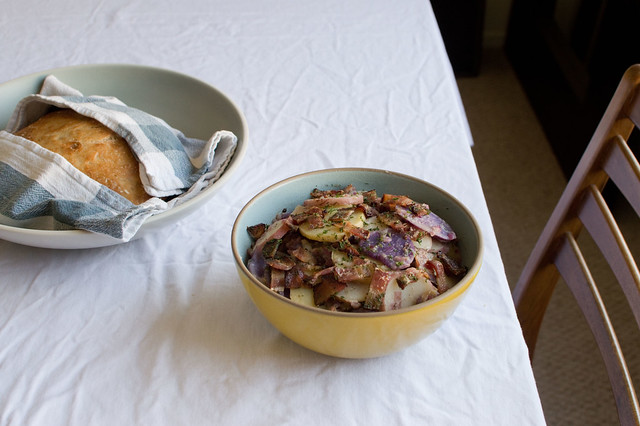 {potato salad}
This is a vinegar based potato salad but it uses bacon fat instead of oil. It's heavenly. If you're veg, you could leave out the bacon and swap in regular oil and it would still be very good, I think.


Potato salad with vinegar and bacon (recipe is from here, serves 6)

:: Steam potatoes until tip of a knife easily pierces the center of slices. This was about 10 minutes for the Yukon golds and red skinned potatoes, significantly less for the purple potatoes. Set potatoes aside in a large bowl.

:: Sauté bacon in large skillet over medium heat until brown, about 3 minutes. Remove bacon and set aside. Reduce heat to medium. Pour off some of the fat. You want to use 2 1/2 tablespoons of drippings, which is more than you might think.

:: Add the chopped onion and cook for about 2 minutes, until golden. Whisk in the vinegar, mustard, sugar, salt and pepper. Simmer until mixture is slightly reduced, about 3 minutes. Remove from heat.

:: Pour the dressing straight from the skillet into the bowl with the potatoes. Toss gently (I actually use a soft spatula instead of a spoon to cause less breakage). Add your chopped bacon and fresh dill and toss. Transfer your salad to a smaller bowl if you'd like. Equally good warm or at room temperature.

I use my handy mandoline for slicing the potatoes.

We got a tri-color blend of waxy potatoes rather than the red potatoes the recipe calls for. Purple potatoes are gorgeous but they seem to cook more quickly. Steam them separately! Any waxy potato should work, just stay far away from russets, which have the wrong texture.

The original recipe calls for 1/2 cup vinegar and 1/2 cup water but I just use 3/4 cup white wine vinegar. I love vinegar and I don't think it's overpowering here.

2.5 tablespoons of bacon fat seems like a lot. It's more than you need to cook the onions, so I low balled it the first time I made this salad. Then I realized that the point of the bacon fat is not just to cook the onions, it's to make the dressing. Whether you're using bacon fat or oil, I recommend using the full amount in the recipe. I promise it doesn't taste greasy at all. If you want to make the dish lower fat, you could easily cut the fat down and it will be delicious but it's so much better as written.