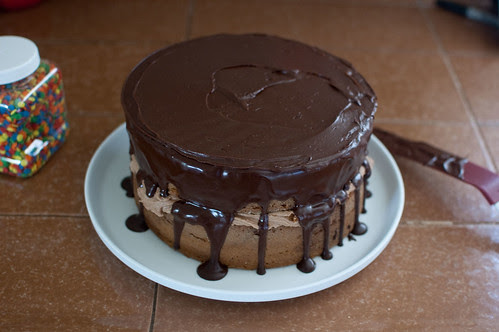 It wasn't my month for cake. Prior to the cake disaster of 2012, I made a yellow cake and decided to attempt the notorious fudge frosting spur of the moment. But because it was impulsive, I didn't have all the right ingredients. I was low on sugar, so I skimped a bit. I was out of baking chocolate so I used semi sweet. I stirred the entire time because I didn't want to deal with cleaning out a really messy pan. I'm sure you can see where this is going.

It was an epic failure. I gamely attempted to rescue it with a 30 minute beating, then a splash of milk, then I tried adding powdered sugar to make it a buttercream. Not happening. It was grainy and wouldn't set up. I cursed for a while and then stuck it in the fridge and went to bed, under my theory that sleeping fixes everything.

In the morning, I still had a perfectly good yellow cake that needed frosting. A night in the fridge hadn't improved the fudge. I was out of white sugar completely. I only had salted butter. I needed to leave the house in less than an hour and I was starting to feel like an idiot for not just making birthday cookies instead - so much less fussy!

I dug through my cookbooks and found a recipe that met my narrow requirements. I had to use salted butter and semi sweet chocolate, but it didn't seem to make any difference and it came together in less than 5 minutes. I had low expectations. Glaze is not frosting, I say. This may have changed my mind. It set up in the fridge and created a satisfying layer on the top of the cake and it will definitely be part of my kitchen arsenal from now on.

I knew I didn't have enough to frost the entire cake, so I drizzled the glaze over the top while it was still hot, letting it drip down the sides. Then I let the remaining glaze chill for 20 minutes, whisked it up and spread a thicker layer on top of the cake.

:: Put everything in a bowl or glass measuring cup and microwave, stirring every 30 seconds or so until melted. Don't let it get too hot! If it boils the butter will separate and the frosting won't get thick. It should come together quickly (there can still be a few unmelted pieces of chocolate and they'll melt as you whisk) and once it's hot you just need to whisk it till it gets smooth. Use immediately if you want the glaze effect or let it cool a bit if you want it to be spreadable.

:: If you don't have a microwave, you can just place your heat safe bowl over a pot of boiling water or use a double boiler. Just be careful not to let steam or water get into the bowl, because water is the enemy of chocolate. I don't use the microwave much, but I'm always grateful to have one when I'm working with chocolate.

I used my pathetic grainy fudge for the interior of the cake, but now I wish I'd just made more glaze and used it as filling as well. 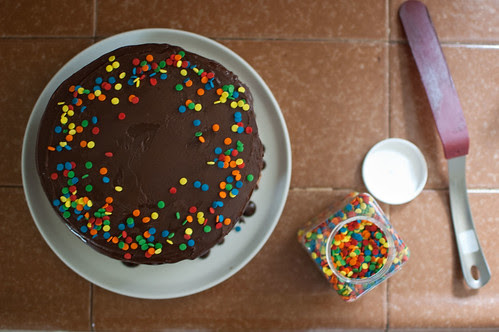 Bright confetti can help disguise a multitude of sins.


I used this yellow cake recipe and I'm a fan. I didn't have buttermilk and it was totally fine.
Posted by Rachel at 5:31 AM