I seem to have a rule wherein once I've worn the same polish twice in a row, I decide it's officially worthy of mention here. 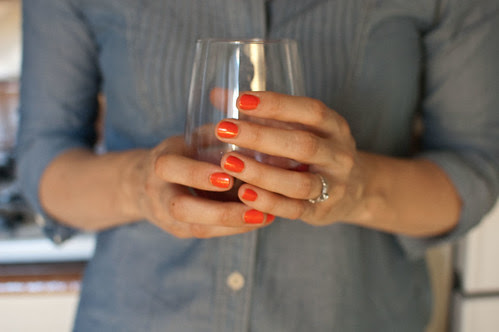 So I'll just tell you that essie's vermillionaire is my current favorite, even if the manicurist laughed at me for choosing something so bright. It looks terrifyingly orange in the bottle, but perfect on your nails.

I also got a really good Butter London manicure at the Seattle airport (terminal C, if anyone has time to kill at Sea-tac). I don't have photographic evidence, but their Come to Bed Red is perfection.

I'm still not buying nail polish but instead paying for a manicure or polish change every now and then (or lately, three weeks in a row, but that's unusual). It's working for me and I'm glad not to have the accumulation of polishes that I never manage to use up.
Posted by Rachel at 5:47 AM