In my quest for crock pot meals, this soup is reigning supreme so far. I made it three times in one month, which is pretty heavy rotation even for me. 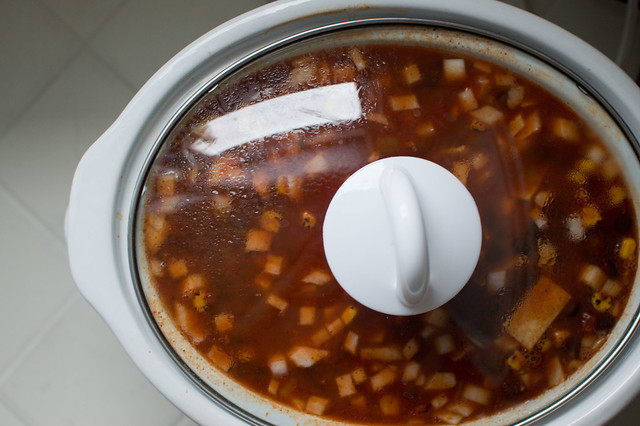 {chicken enchilada soup}
The recipe is right here and it works perfectly as is. I have a few small tweaks - I use bone in chicken pieces and just pull the bones out and roughly chop the meat before serving. Bone in is less expensive and it really isn't that much work. I also use the frozen fire roasted corn from Trader Joe's instead of the canned stuff. If you want the soup to be a bit thicker, you can cut a few corn tortillas into strips and toss them in at the beginning. They'll disappear but provide a little more body to the soup.

This is also how I used up the leftover turkey from Friendsgiving. I always make turkey stock from the bones, so I had that on hand. Since the cooked turkey didn't require a long cooking time, I modified it to be a stove top meal by sauteing the onion and garlic in a large pot and then adding all the ingredients except the turkey and simmering for about 30 minutes. I tossed the chopped, cooked turkey in during the last 10 minutes.
Posted by Rachel at 9:30 AM