Once a month meal planning - January

Trying out this new thing, where I only plan monthly instead of weekly. I don't know that I'll do this indefinitely, but January is always a rough month for me and this one will be particularly insane. Work is crazy for me, D is going to be studying a lot, we're going to be moving. I didn't take the moving thing into account when I made this schedule, so part of me feels like I've already failed, but I'll adjust as necessary. 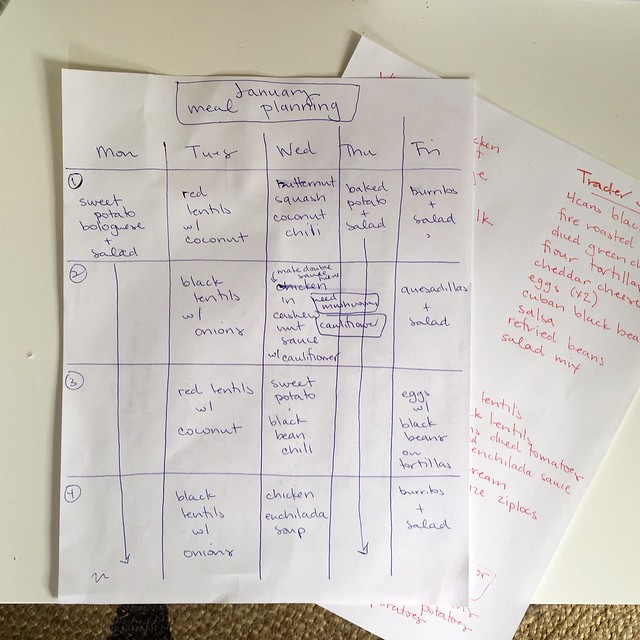 I've always been a weekly meal planner but I'm a fairly repetitive cook. I tend to make the same few dishes regularly, so I figured - why not run with it? Those of you who like to make new things all the time will probably die of boredom just looking at my list. I did have that month where I tried making a different (new) dish every weeknight and it was fun, but not sustainable for me.

What I did here was assign each night of the week a different theme. Mondays are spiralizer nights (and you'll notice that this month I'm just sticking with our favorite - sweet potato noodles with bolognese). Tuesdays are lentils, and this month I'm alternating between two of my favorite recipes. Wednesdays are crockpot nights as long as it's chilly. Thursdays are for baked potatoes and Fridays are for whatever can be made as fast as possible, because I have a three hour weekly meeting on Friday evenings and by the time I get home I'm exhausted and starving.

I've front loaded the recipes that involve actual cooking at the beginning of the week. That leaves me flexibility because if we have too many leftovers I can just skip the planned Thu-Fri meals and the ingredients will keep till next week (or the weekend). We're only in the first week and I'm already taking advantage of that because D ended up having lunch meetings every day this week and didn't need to take any lunches to work, so the three cooked meals will probably carry us.

As usual, I don't meal plan for weekends, because we often end up being out and about and if we're at home there's generally leftovers or something quick.

Can't decide if I'm going to get super bored and go off the rails. I actually don't think this is much more repetitive than I am normally, but there's something about seeing it all laid out that makes it feel more repetitive.

Recipes that I'm using this month:

Sweet potato noodles with bolognese - not a real recipe, but I mention it in my spiralizer post and it's one of our favorites. I bought all the meat at once and divided it up and froze it into four portions. If I was truly getting serious, I could have made a huge batch of marinara to portion and freeze but I just bought four jars. Baby steps.
Coconut curried red lentils
Black lentils with caramelized onions
Butternut squash coconut chili (new to me)
Chicken in cashew nut sauce - as usual, I'll make a double batch of the sauce and freeze half for next month
Sweet potato and black bean chili - I love this recipe and I've been making it about every three weeks to use up the odds and ends of sweet potato leftover from spiralizing.
Chicken enchilada soup - still a favorite around here.

This month is going to completely decimate my freezer supply of homemade chicken broth, so I'll probably make sure that a couple of our weekend meals consist of rotisserie chicken so I can restock. The homemade broth makes such a huge difference in soups.

I did most of our shopping last weekend and it was surprisingly not that much work. We're only two people, and there are a few things I'll have to pick up weekly (salad greens and produce) but all in all it was really manageable. It was also really cheap. I know the bill will go up because we'll still be purchasing things throughout the month, but it was crazy to see what a small portion of our grocery budget went towards the bulk of our food needs this month. The lentils help with that. We're not vegetarian (clearly) but I try to limit how much meat I eat and this is the general level that I'm comfortable with. This month we have red meat once per week (but we each get two servings because there are leftovers) and we have chicken every other week (again, we each get a couple servings). I've posted about how we approach meat here.

I'm mildly obsessed with meal planning and don't hesitate to switch up my system as our lives change, so you can find lots of other posts on it here if you search "meal plan." My original post on developing my meal planner is here and my 2014 update is here. This post is about coming up with your own system. Here is a post on three weeks of meals in detail.
Posted by Rachel at 6:35 AM