So you've all been hearing about capsule wardrobes forever, right? Only using 30ish pieces of clothing or something like that? This is really appealing to me because I'm a terrible shopper and I'm finally realizing that the issue is that I don't like shopping very much most of the time*. You'd think this would mean I have less clothing, but no. It just means I have oddly assorted clothing and then wear the same things over and over again. Back in January I decided I needed to come up with a better system that would be more uniform-y and efficient. So now it's August ... 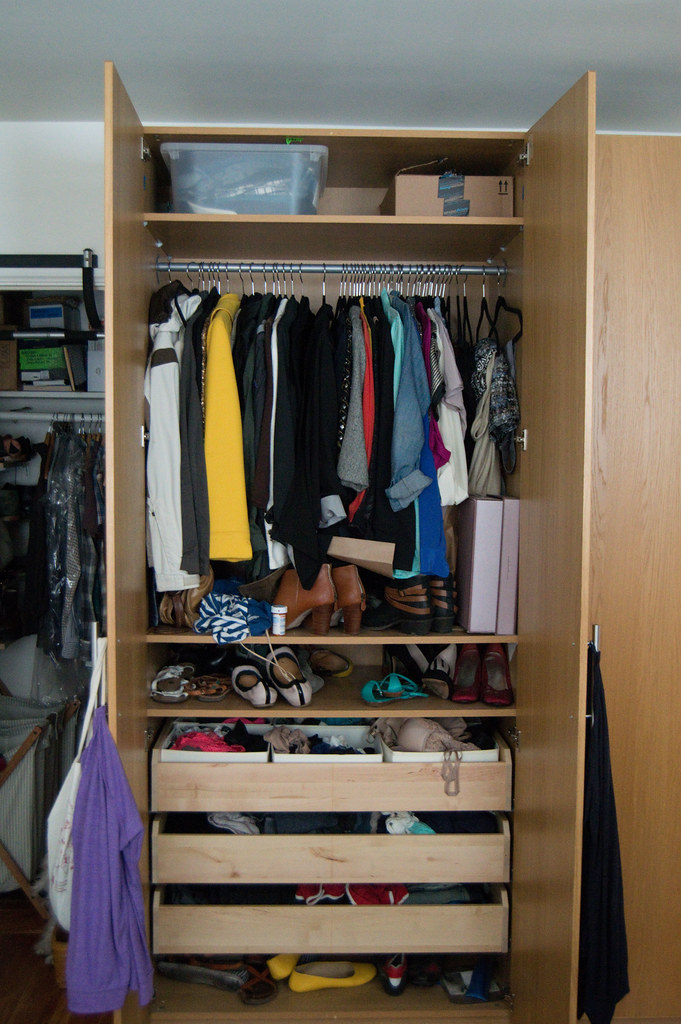 {before}
I was initially planning a pretty drastic overhaul. I wanted to cut my wardrobe down to 35 pieces (including shoes and clothes, everything except underwear and workout gear). I read through the guide at Unfancy and it seemed fairly doable (note - I've linked to the wardrobe planner but you'll need to poke around a little to get more information from her site about how she pieces out her wardrobe). I liked that it at least gave me a solid outline of how I'd want my closet allocated and what pieces I might need. I strategized quite a bit.
But strategizing is not the same as executing. When I actually went to tackle my closet it became clear that getting down to 35 pieces all at once was going to be a huge mental effort and I was probably going to burn out my decision making power before I was done. This has happened in the past and it gets ugly. Sometimes I give up and put everything back in the closet. Sometimes I give up and toss out all my long sleeved shirts because I haven't worn them in months (ignoring the fact that it's summer) and then in October I have nothing to wear. I took a modified approach instead.
I worked methodically, pulling out everything from one section at a time. I spread it all out and sorted into categories (tops, bottoms, special occasion, etc) to get an idea of what I had. Some pieces I knew needed to go - I didn't care about them and I hadn't worn them in forever. Some pieces were clear keepers (I'd worn them multiple times in the last few weeks). Then there were all the in-between things. Stuff I loved but hadn't worn in a long time. Pieces that could potentially be really useful (or used to be useful) but I didn't love that much.
I started to feel overwhelmed with the decision making process so I decided to set up a clothing purgatory. Anything I wasn't sure about I marked with a piece of yellow ribbon, either knotted on the hanger or pinned on the tag. If I wear something and feel good about it, I'll take off the yellow ribbon. In a few months I'll revisit my closet and anything that still has a yellow ribbon will go.
I also have a few purple tags, which are for pieces of clothing I do wear a lot but would like to replace with a better version soon. This way I'll know to keep my eye out for those staples. 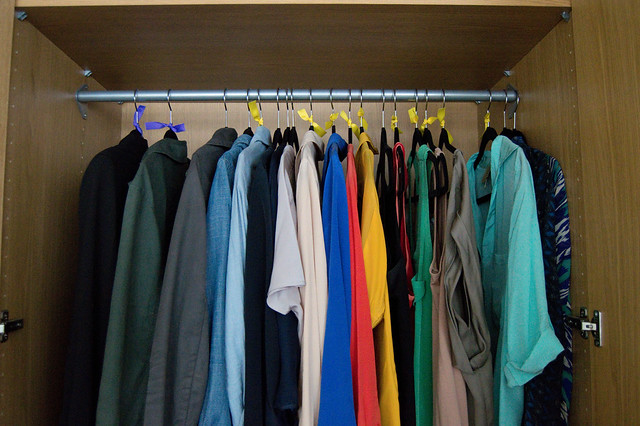 {hanging}
I think the marking system is what made it possible for me to get through everything without feeling overly stressed out. It's worth noting that I did not try anything on. I felt like that would just get distracting (and possibly depressing) and I was pretty sure I wouldn't finish. I'm just spreading it out a bit, since I'll eventually try these things on when I'm deciding what to wear. I think I can handle it better in small doses. 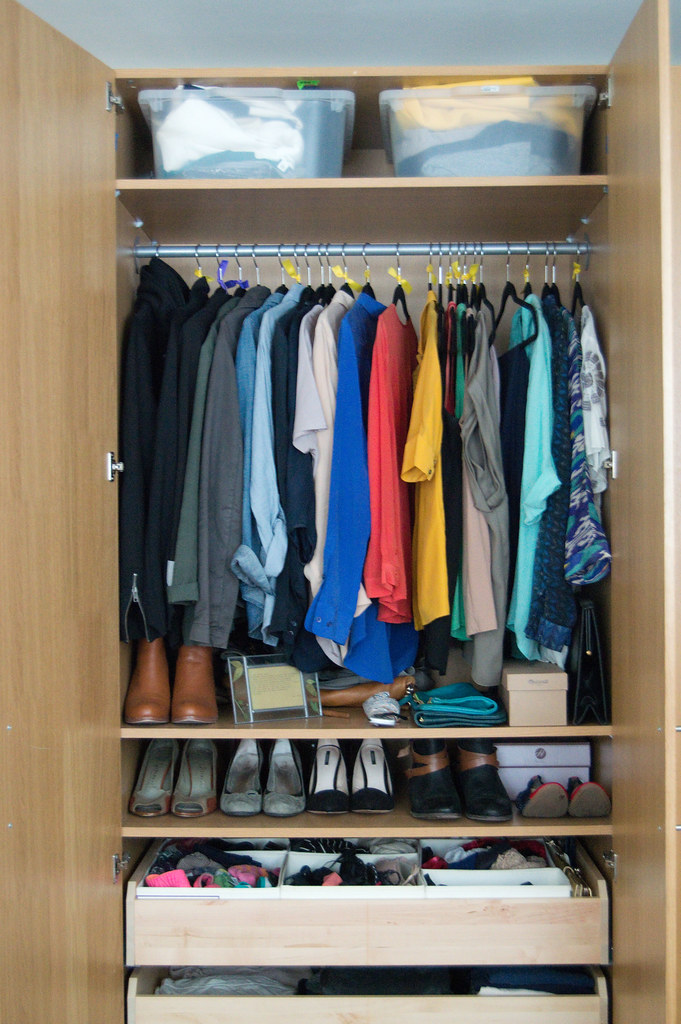 {in progress}
In addition I set aside a couple of boxes and stashed them on my top shelf. One has my winter/holiday clothing and one has clothing I'm not quite fitting into right now. It's been a rough year, guys. I'm not going to beat myself up about it, but there's a good 5 - 10 pounds standing between me and my usual jeans. I figure if I'm still here in another six months, I can just give the whole box away in one go.
This isn't quite everything - my dresses are hanging in the coat closet but I sorted through them with the same system.
So I didn't exactly achieve my goal (I have no idea how many pieces of clothing I still own) but I think I'm heading in the right direction. I'm going to see how it goes and hopefully I can make this an ongoing process over the next several months. I want to be in a place where getting dressed is easy and I'm happy with all my clothes.
* Once I realized this it was nice because I mostly stopped shopping. But it's lead to the secondary situation I'm in now, where I've worn through every pair of everyday shoes and now I need to buy sandals, flats and sneakers and it's a nightmare, because I hate shoe shopping more than anything else.
Posted by Rachel at 6:57 AM