In the comments last week someone was curious about what the week to week looks like with meal planning in the new(ish) system, so I'll recap what I've done the last three weeks. I usually do the meals in the order listed but the days vary and I'll adjust if necessary. I didn't keep track of what days each of these meals were cooked, so I'm working from memory. 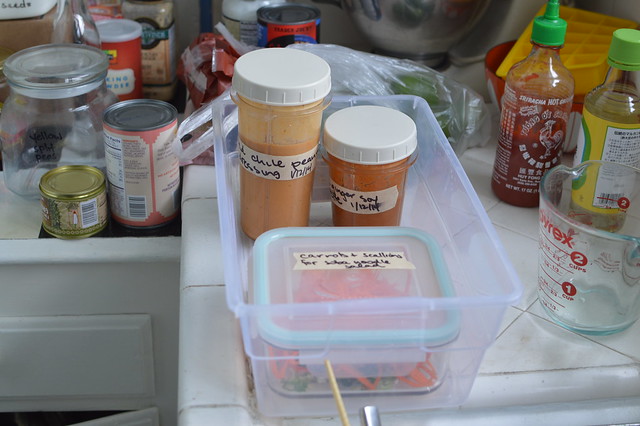 Planning thoughts: I'd been having major cravings for Take a Bao's side salad, which is their Chinese chicken salad without the chicken. I was torn on whether to go with baked tofu or chicken for the salad protein, but D offered to pick up a rotisserie chicken from Whole Foods on his way home. And then the noodles just sounded good. I'm currently searching for a great soba noodle recipe.

Advance prep: Washed and chopped all vegetables for the Chinese chicken salad and the soba noodles. Set aside in separate containers, labelled. Made dressings for the salad and the noodles, labelled (I store the dressing directly in the containers that come with the blender because they have lids and it means fewer dishes, but obvs it would also work in jars).

Recipe thoughts: The salad was pretty good but not what I was looking for. I may have sliced the cabbage a little too thin and the dressing wasn't exactly what I wanted. Clearly, this means I need to go back and taste test the T.A.B salad several times (strictly for recipe development). The soba noodles were good as well, and might end up on our regular rotation. I think I was more into them than D was, but that's pretty standard with noodles of most varieties. 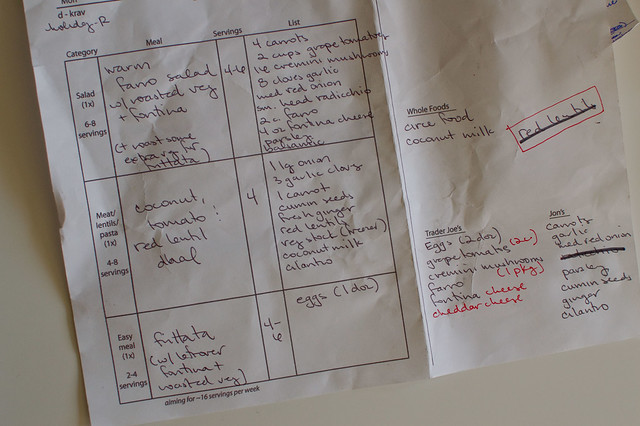 Planning thoughts: I decided our burrito fixings would hold up for another week, although we did have breakfast burritos a few times so that was helping make a dent. I wanted to test out this farro salad and D requested the red lentils, which was perfect because we could use up the leftover cilantro. I figured we'd have leftover vegetables from something, so I decided on a frittata for our end of the week easy meal. The orange bell pepper was a spontaneous addition, because they were on sale.

Advance prep: Minimal this week. I could have chopped all the vegetables in advance but I didn't have much time on Sunday and I had Monday off that week so saving time wasn't a big issue. I roasted twice as much cauliflower as we needed on Tuesday so that I could chop up half and use it in the frittata later in the week, so it was a really quick Friday night meal. I used up the rest of the fontina in the frittata as well.

Recipe thoughts: The farro salad was so good that we were tempted to make it again the next week. I think I'm going to play with it a little and then share my modifications here soon. I'd never made a frittata with roasted cauliflower before but we loved it and will probably do it again. 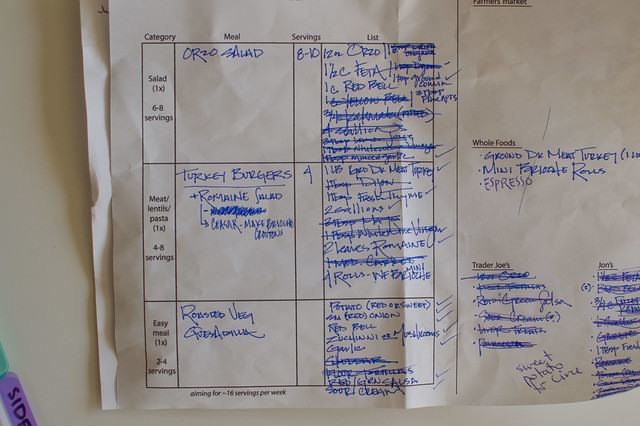 Planning thoughts: We wanted to use up the last of the burrito ingredients and also the random bell pepper I had leftover from the previous week when they were on sale.

Advance prep: Sunday evening I chopped everything for the orzo salad and made the dressing. I also chopped and then roasted the vegetables for the quesadillas. On Monday all I had to do was boil the orzo, toss it with the veg, the feta and the dressing. The quesadillas were also a 15 minute meal because I had the vegetables waiting. The turkey burgers I made the day of because I never buy meat ahead of time, just in case something comes up and we don't get around to using it.

I also randomly ended up making butternut squash soup that week, because they were on a good sale and I haven't made it all winter. We ate it for lunches and also as a side with the quesadillas and it was a good addition.

Recipe thoughts: The orzo salad is one of our standbys and it was reliably good. I really enjoy those turkey burgers and they're a quick weeknight meal. I always use the mini brioche buns from Whole Foods if we're doing burgers, because they're the best. I've never posted about the roasted vegetable quesadilla recipe because I don't make it often, but it's always in the back of my mind. It's the perfect winter quesadilla.


It drives me a little crazy that this round up is three weeks instead of a nice even four, but we had some big family medical appointments scheduled this week and I knew I'd be tired and unmotivated to cook so I just ditched meal planning altogether and baked a giant side of fish, steamed a pot of broccoli and made some rice on Tuesday and we're going to eat that Tuesday - Friday. After years of experience, I can tell you this - knowing yourself is the best way to succeed at meal planning. If I try to convince myself that I can suck it up and just make dinner even when I know I won't want to, I will fail and order take out and feel guilty about the wasted groceries I bought. I mean, sure, set reasonable expectations for yourself or you'll never "feel" like cooking. But also be realistic and reduce your cooking schedule if that's what it takes for you to manage.
Posted by Rachel at 2:42 PM