Actually, that's unfair. These shelves are the first thing we got done in our new apartment and they were a HUGE step. Our kitchen is adorable but not terribly functional due to a severe lack of cabinet and counter space. The area right next to the kitchen is meant to be a dining room but it's too small for our table so we're going to use it for extra storage and work space instead (we haven't figured out how we'll have people over for dinner yet, but we're working on it).

We already had the adjustable shelving system so we repurposed it. We painted it a dark gray (still a little torn on whether we picked the right color) because the glossy white wasn't going to blend into the wall anyways and we decided we'd rather have something that obviously stands out instead of a failed camouflage situation. We just used six foot boards as the shelves. I thought I'd be able to put out all my glassware, dishes, servingware and vases and then use one shelf for my cookbooks. Clearly, I'm terrible at estimating how much space things will take up and I have a lot of dishes. The cookbooks remain an issue. 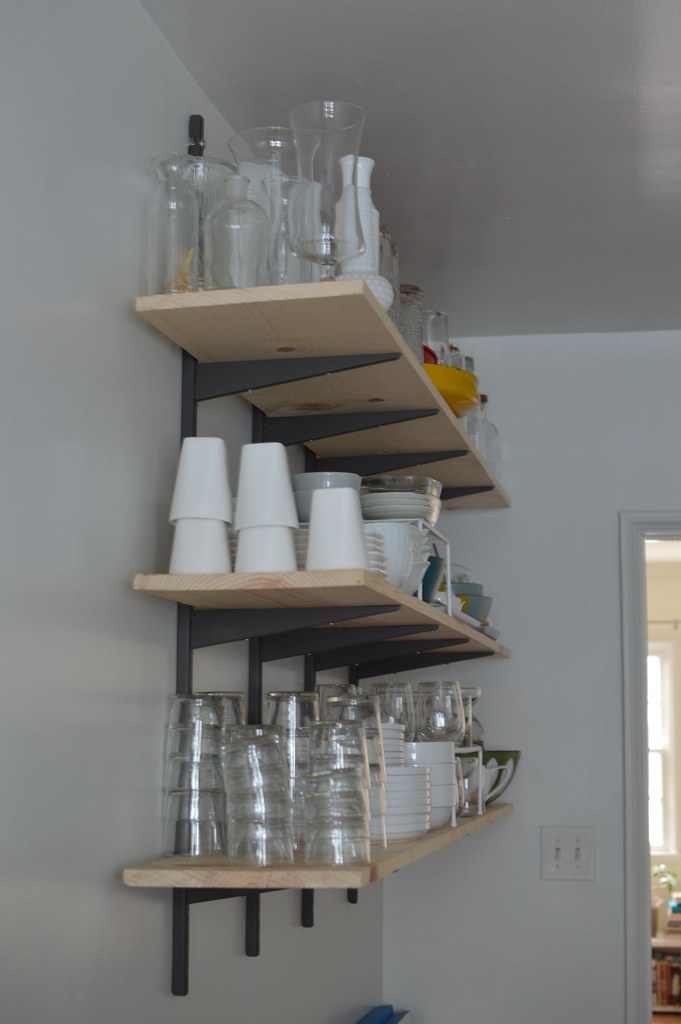 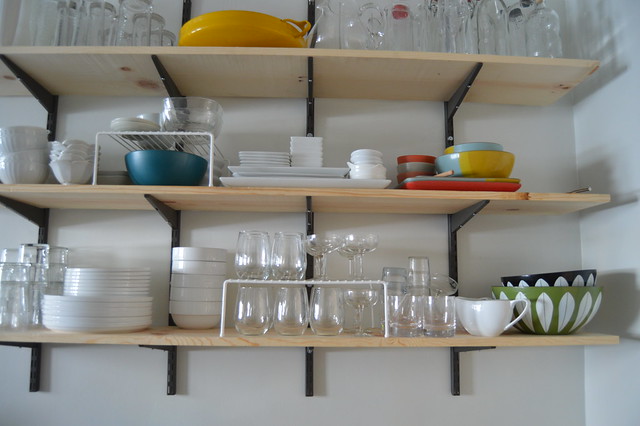 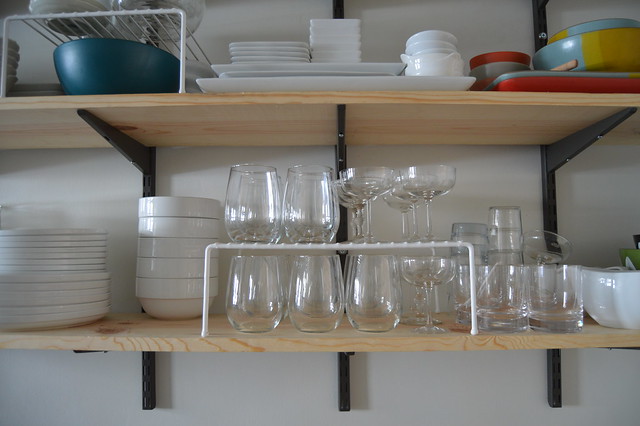 {glass display}
Our plan is to eventually paint the shelves white to match the wall and put in nicer brackets so they're just floating and don't have the rails. But for now, this is a game changer. I'm using the limited cabinet space the kitchen came with to store our actual food and our mixing bowls, salad spinner, etc.

I was worried about open shelving when we live in an earthquake zone but after many, many internet searches for not-too-ugly solutions I decided we'd just take the risk. The main thing everyone points out is that in a major earthquake your cabinet doors are basically pointless anyways, unless you have those terribly annoying earthquake locks installed. But you'll notice I didn't put our wedding china up there.

I'll probably get a few more of the stacking shelves I'm using for the glasses. They aren't the most beautiful solution but it doubles the storage space and I like the multi-layer look.

We're also putting in a small shelf to stack our large pots on and we'll hang our pans right under it. That will go in the tiny kitchen area, right next to the stove.

We have a plan for the other wall of our "dining room" space and I'm hoping we get it put together in the next few weeks. I am SO DONE with the stacks of appliances and that consarned jug of molasses that doesn't fit anywhere else in the entire kitchen.
Posted by Rachel at 8:56 AM