* I will eventually get some shorter, prettier posts up! I just have all these big long ones that I've been slowly working on and they're eating up my photo time.* 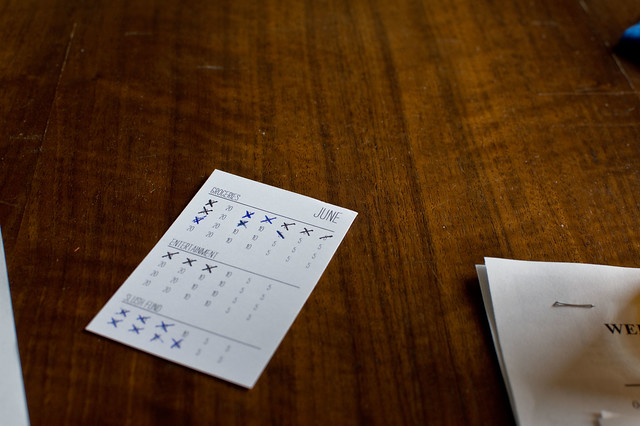 We started our new spending system in February, and I won't lie, it was rough. I think it was mostly that we had several social things early in the month and then ended up feeling pinched later on. I was grateful that we had a box of mac and cheese in the cupboard the last night of the month so that we could get through without cheating (obviously, we're in a privileged position in that our spending constraints are self imposed and if we had really needed something, we have the option of ignoring the cards or giving ourselves more money, but I'm trying to see this as a challenge).

March was easier, then April was hard, May was fine and June we went over and then July was TIGHT the whole way through and we had to impose austerity measures to get through the last two weeks. That seems to be the way it goes. If I have overage in a particular month I'll just keep the card and use it up before moving onto the next month. If I have a big purchase that I can't pay off in one month I'll write it down on the back of a card and then once I have enough overage accumulated I'll deduct it. That's technically cheating, but I live with it because it's the only way I can take advantage of sample sales.

The good news is that we are saving so much more money than we were last year. Essentially, just being mindful helps. I'll even resist the random things I used to pick up for myself while grocery shopping because I'd rather have that $1.99 to spend on something else. Although the coconut chips at Trader Joe's can be hard to resist and sometimes I decide they're worth it. Also, this is not nearly as depressing as it sounds on paper. Eating mac and cheese because you literally have no choice? Very stressful. Eating mac and cheese because you're both committed to winning at this budget game? Kind of fun. We try to treat it like a game all the time although I definitely have want-y moments where I wish we could just go out on a Friday night and ignore the fact that we've already overspent for the month.

Last year we were fooling ourselves into thinking we were saving because we'd move money into our savings every month. But it doesn't count if you later have to move it back to checking to pay for things. We were barely accumulating anything.

Because it isn't a hard and fast system, I'm sure that we sometimes forget to mark things down, or we accidentally mark them down twice. I made sure to leave a little wiggle room in our budget so that if everything went as planned we would not only be saving money but we'd also be building up a tiny buffer in our checking account. To figure out if this was actually happening, I periodically downloaded our daily account balances and graphed them. Yep, I love Excel. There are big ups (paychecks) and downs (RENT, credit card bill, withdrawals for personal allowances and savings accounts) but the overall trend is going in the right direction so I'm glad. Our highest peak gradually gets a little higher. Technically, as long as we stay on a plateau we're reaching our goals here, so it's exciting to see that we're actually doing a bit better than expected. (Our short term savings is meant to get depleted regularly - that's our fund for vacations or bigger indulgences.) 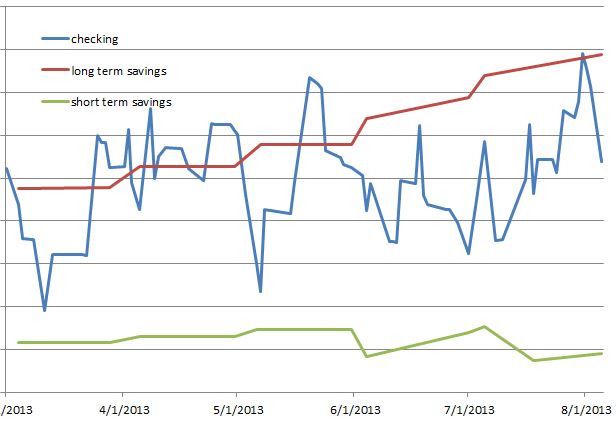 Several of you asked for the card template and I'm sorry I've been so slow to get it ready! I converted it to a write-able PDF, so that you can customize your amounts and categories. NOTE - You need to download this file for it to be a writeable PDF! It will not work in Google Drive - you'll just see blank spaces.

Just edit the set for January (enter your categories and amounts - you can tab through so you don't have to click on all those tiny boxes) and the remaining months of the year will update to be the same automatically. The first card is used for our household expenses and the second card is used for our personal allowances. I've only included one personal allowance card in the file. If you have two people, you'll need to print the file twice (sorry - didn't think of that until I was two hours deep creating the file and I couldn't bear to go back!).

I recommend printing the file on cardstock. The cards are sized to slip behind your credit cards in your wallet. I keep them there and then fold and tuck any receipts back there as well. You won't fall behind on your receipt entering if you're confronted with them every time you pull out your credit card. Or at the very least, they are hard to ignore.

D designed our cards and I based the writeable PDF on his design. Mine aren't as pretty because the font we used (Strangelove - it's a favorite around here) can't be embedded due to restrictions. But they should get the job done all the same. If you just straight up want to print our cards with no changes, here they are.

I hope these are helpful for some of you! Let me know if you have any questions and I'll answer in the comments.
Posted by Rachel at 5:32 AM