We tried Five Guys. I had noticed them springing up (are they originally an east coast thing?) but we aren't usually in places where we have to rely on fast food, so our intake has dwindled down to nothing. Driving to get food makes no sense to me when we live in a city with this much traffic. I'm not getting in the car for anything other than a really good meal and I'll usually whine a little if we have to cross Fairfax to get to it. I still have my favorite fast food places (I grew up in Orange County, you guys - I know a lot about drive thru), but we mostly only hit them up on road trips. Although they are opening a Chipotle just a three minute walk from our apartment and I'm already concerned about how I'm going to control myself.

On our extremely efficient Ikea trip the other weekend, we realized we needed to eat and I remembered that Angel had mentioned Five Guys last month and there happened to be one in the shopping center. 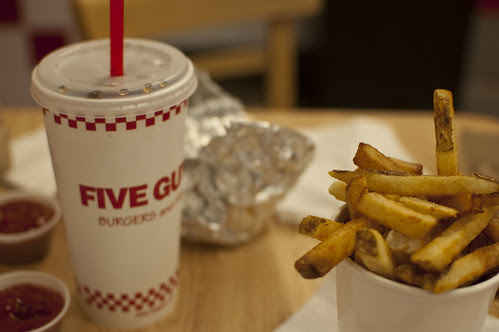 {five guys}
First of all, someone should warn people that this is a lot of food. We split a big burger (which appears to just be a normal burger but with two patties - shouldn't that be made clearer on the menu?) and regular fries and it was overwhelming. We didn't finish everything. The free peanuts were nice, the fries were good. But I'll still take In'N'Out over Five Guys. The buns and toppings were clearly inferior here, and that actually makes a bigger difference to me than the meat.*

If you are looking for a really awesome burger (as opposed to a good fast food version) I highly recommend Tavern's Niman Ranch burger. You can only get it on the bar menu, but it blows everything else out of the water and it comes with sliced pickles that are so good that it might be my life's goal to crack their recipe. Umami burger, Father's Office and Golden State are my other LA recommendations, with an honorable mention for 25 Degrees at the Roosevelt Hotel.


* I deleted and re-wrote that paragraph ten times. It goes too far into review territory, and I hate to think I'm spending this much energy talking about fast food. BUT, I spent that much energy thinking about it, so I guess you're getting it, unedited. If you'd rather have a short version, it would be "meh".