It's still a bit gloomy here, and sometimes there isn't anything better than a cozy meal, particularly if there is lots of cheese involved. 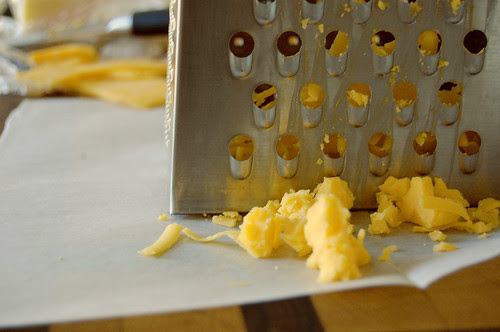 Mark Bittman's baked macaroni and cheese + a few alterations (makes 4 - 6 massive servings, from How to Cook Everything Vegetarian) 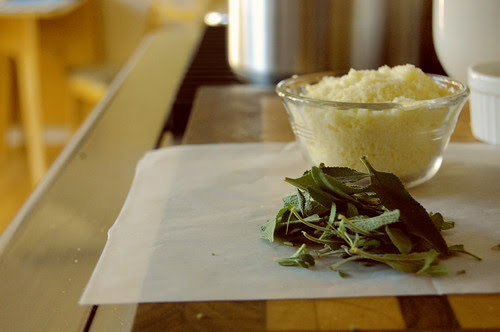 ** Cook the milk with the bay leaves in a small saucepan over medium-low heat. When small bubbles appear along the sides, about 5 minutes later, turn off the heat and let stand.

**Cook the pasta to the point where it is almost done but you would still think it needed another minute or two to become tender. (If using dried wild mushrooms, make it easy on yourself and toss them in the pot - they'll hydrate along with the pasta and you don't have to deal with an extra step). Drain it, rinse it quickly to stop the cooking, and put it in a large bowl.

**In a small saucepan over medium-low heat, melt 3 tablespoons of the butter (toss in the chopped sage, if using); when it is foamy, add the flour and cook, stirring, until the mixture browns, about 5 minutes. Remove the bay leaves from the milk and add about 1/4 cup of the milk to the hot flour mixture, stirring with a wire whisk all the while. As soon as the mixture becomes smooth, add a little more milk and continue to do so until all the milk is used up and the mixture is thick and smooth. Add the cheddar and stir.

**Pour the sauce over the noodles, toss in the Parmesan, and sprinkle with salt and pepper. Use the remaining 1 tablespoon butter to grease a 9 x 13-inch or similar-size baking pan and turn the pasta mixture into it. Top liberally with bread crumbs and bake until bubbling and the crumbs turn brown, about 15 minutes. (I didn't have bread crumbs, so I sprinkled the top with Parmesan, and it was delicious). Serve piping hot. 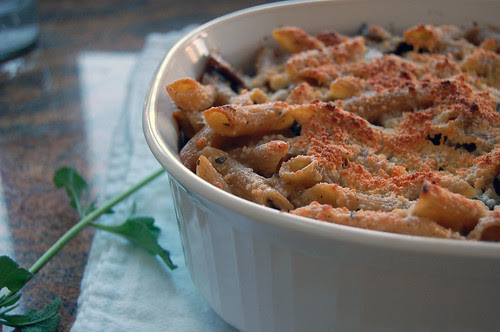 This was such a perfect weekend supper and everyone ate it up. I'm embarrassed to admit that it still won't wean me from my guilty addiction to Kraft Mac & Cheese. For those of you who don't have an entirely emotional/nostalgic attachment to bright orange chemicals, making the swap permanent should be easy.