Once a month meal planning - March

March is a little wonky because we'll be taking a short trip and the way the calendar works out for my system it's actually five weeks instead of four. I'm trying to add in more side dishes this month so that we're getting more veg. I'm normally really lazy about sides other than salads but now that I have the bigger kitchen there's no excuse. I guess I'm still being lazy because mostly what I'm doing this month is adding a big side of saag to our crockpot meals. I love cooked spinach and since I'm not doing any cooking on crockpot nights anyways, it won't feel like I'm adding too much extra work. Baby steps, right? 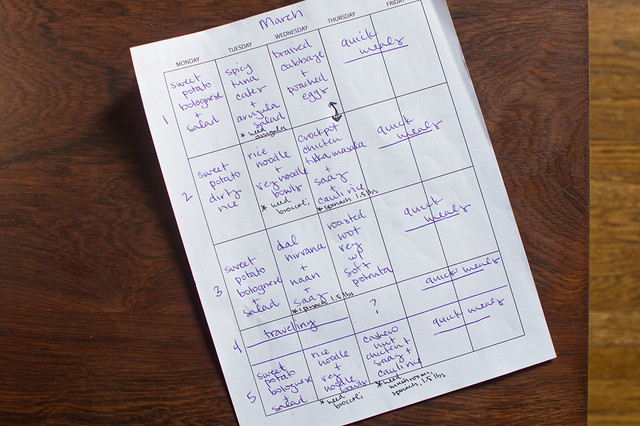 Recipes for this month:

Spicy tuna cakes + arugula salad (thinking I'll improvise a Meyer lemon and olive oil dressing for this) - I love this simple recipe and I haven't made it in a few months. I do NOT use the muffin pan because I find they stick like crazy and cleaning a muffin pan is annoying in the best of circumstances. I just form patties and bake them on the Silpat.

Braised cabbage + poached eggs - a perennial favorite. I always like to add some thinly sliced fennel and extra carrots.

Brown rice noodle and vegetable bowls - planning to increase the veg:noodle ratio by getting some large carrots so that I can spiralize them and have carrot noodles. Hope the recipe is good, since I haven't tried it before and I'm using it twice this month!

Crockpot chicken tikka masala + saag (using that recipe minus the paneer) + cauliflower rice (I get it frozen from Trader Joe's) - I haven't tried this recipe yet but I'm hoping it will be a keeper.

Dal nirvana + saag + naan (frozen from Trader Joe's) - Another new to me recipe, recommended by a kind reader!

Roasted root vegetables with soft polenta - Not really using a recipe for this, but similar to this one (+ some mushrooms, probably) except that I like polenta soft rather than sliced, so the polenta will be more like this.

And the grocery list for the month. The top left corner is where I write down pantry items that I'm pretty sure I have but I need to check. I get all of my meat for the month at Whole Foods and then divide it up and freeze it. For veg, I decide which items I can get at the beginning of the month (onions, garlic, etc, usually last fine, bell peppers and fennel and the like will hold up a couple weeks) and which items I have to get week by week (salad greens, mushrooms, etc). For the most part, it's been going pretty smoothly and I feel like I spend a lot less time at the store. 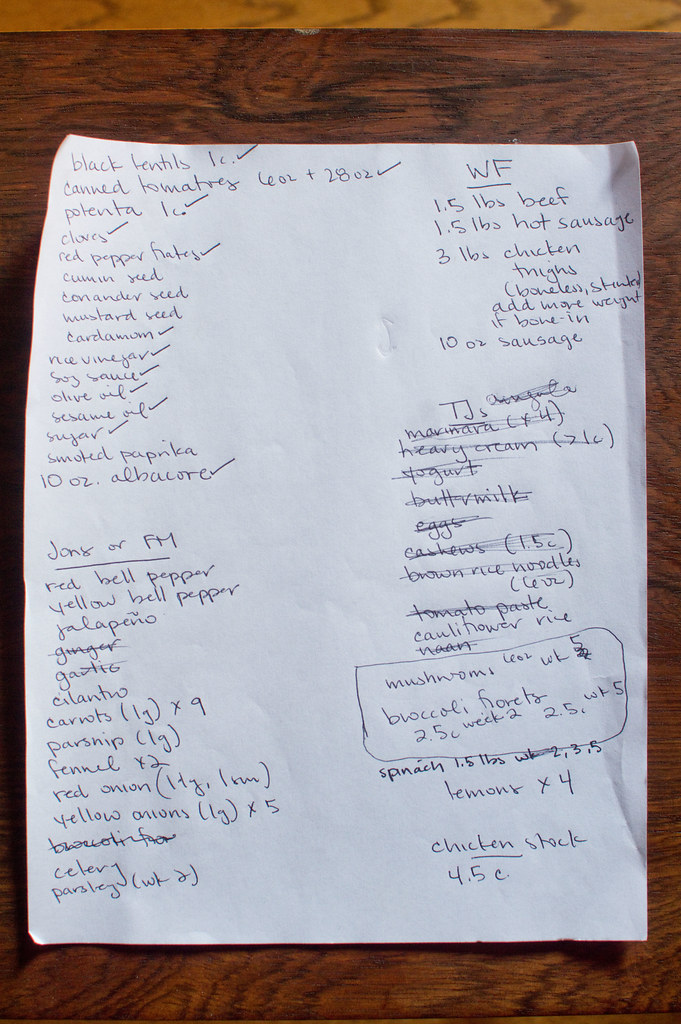